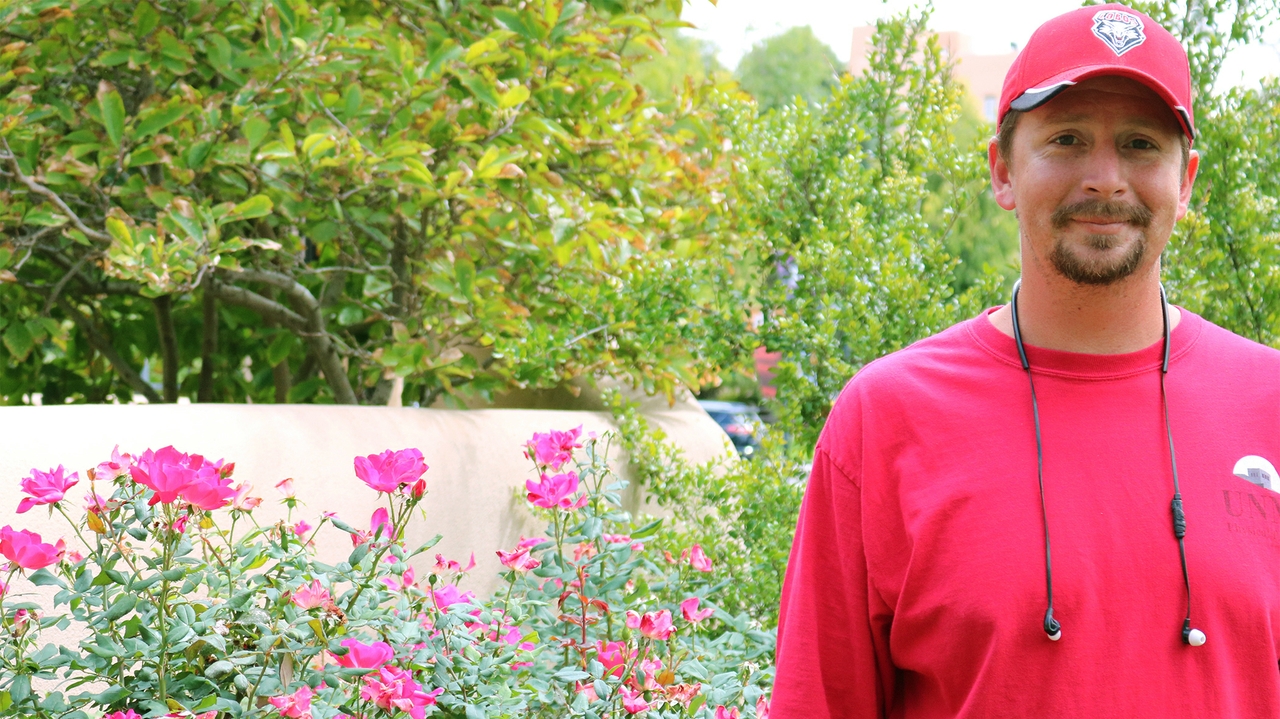 Master gardener for campus and community

During the week of the 2018 New Mexico State Fair, while half a million fairgoers were taking in concerts, riding rides, and gobbling down all things fried, Master Gardener Cody Alvstad was at work off the midway in the Floriculture Building.

Alvstad is not only a master gardener for The University of New Mexico’s Facilities Management, he also holds that title for the Bernalillo County Extension Service. In that role, he has volunteered the last two years to spend his evenings at the fair fielding questions from concerned gardeners about everything from the best time of day to mow to how to keep caterpillars off their roses.

When Alvstad became a temporary UNM Turf Tech in 2005, he wasn’t dreaming of someday becoming a Master Gardener for the county. It was just a job. But as he progressed through the ranks of Facilities Management Grounds and Landscaping, his love of horticultural began to blossom.

“I got promoted from turf tech and spent four years as a gardener,” said Alvstad. “I realized I really liked the work and wanted to learn more and move up in the department, so Brian Suhr, former arboriculture supervisor, encouraged me to try the Master Gardener Program with the county.”

Each year, the New Mexico Master Gardener Program trains over 300 gardeners statewide through county extension offices. Courses run from January to April and cover the science behind plants, soil, and weeds, as well as entomology and pest management. Students also learn about plant identification and selection for the region they will serve.

In addition to helping hone his skills for his day job at UNM, he enjoys the Master Gardener Program because it gives back to the community. To keep their county certification, master gardeners volunteer at least 40 hours a year.

“I worked the fair the last two years, but I also volunteer at the public libraries on Saturdays to answer questions, and sometimes we even do home visits for people who can’t come to the library or can’t describe the problem over the phone,” said Alvstad.

The hard work and education paid off for Alvstad, who was promoted to master gardener for Facilities Management in October of 2017.

When not helping the home gardener on nights and weekends, Alvstad and his UNM crew of two turf techs and a gardener have a large area of the UNM campus they support, including the dorms and family housing, Anderson School of Business, and the University property along Las Lomas Rd.

With so many gardens to choose from, his favorites to tend are at the University House—home to President Stokes. It can host up to 10,000 guests annually. It’s the face of the campus and it’s essential for the grounds to be in top shape. But for Alvstad, that’s not the reason it’s his favorite. He exemplifies in his profession what so many hobby gardeners seek in their own backyards.

“I like it because it’s quite over there. Sometimes it’s nice to get away from the busyness of the campus.”