University of New Mexico mathematician and Sandia National Laboratories computational scientist John Shadid has been named a 2018 fellow of the Society for Industrial and Applied Mathematics. 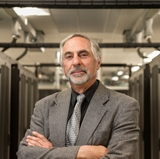 Shadid’s selection by SIAM was based upon his research on solution methods for multiphysics systems, scalable parallel numerical algorithms and numerical methods for strongly coupled nonlinear partial differential equations, according to the society’s news release.

Shadid will be recognized for his achievements during SIAM’s annual meeting July 9-13, in Portland, Ore.

“It is an honor to be awarded this distinction from such an exceptional organization as SIAM with such an outstanding collection of current fellows," Shadid said. "I also realize that the number of worthy individuals for this distinction is significantly larger than the allocated appointments, and therefore it is truly humbling as well.”

He also recognized the value of the sustained funding he has received from the Department of Energy Office of Science’s Advanced Scientific Computing Research Applied Mathematics Program.

“Without these contributions,” he said, “this distinction would not have been possible.”

Shadid is one of 28 members selected for fellow status this year and only the fifth Sandia scientist to earn the honor. Bruce Hendrickson and Pavel Bochev in 2012, Tamara Kolda in 2015, and Cynthia Phillips in 2016 preceded him.

Building a human legacy as well as a technical one, Shadid has supervised and mentored 18 Sandia post-doctoral researchers, served on eight Ph.D. committees and mentored 24 graduate students.

SIAM is an international society of more than 14,000 individual, academic and corporate members from 85 countries. It seeks “to build cooperation between mathematics and the worlds of science and technology to solve real-world problems,” according to its website.