Fetal Alcohol Syndrome (FAS) in the United States has long been estimated at no more than three children per 1,000. A new study published in the journal of Drug and Alcohol Dependence reports that the prevalence of fetal alcohol syndrome (FAS) is between 3 and 8 per 1,000 and when combined with partial FAS (PFAS) the prevalence of both actually ranges between 11 to 25 children per 1,000.

Lead scientist Philip May, research professor with the UNC Nutrition Research Institute (NRI) at the NC Research Campus in Kannapolis, NC, who is also a Professor Emeritus at the University of New Mexico, emphasized that the study “Prevalence and characteristics of fetal alcohol syndrome and partial alcohol fetal syndrome in Rocky Mountain Region City” is only the second population-based study completed in the United States that aimed to establish more accurate rates of FAS and PFAS.

For the past four decades, including 33 years as a UNM professor, May has pursued research on behavioral issues that directly relate to public health. May’s areas of expertise include Fetal Alcohol Spectrum Disorders and FASD prevention. At UNM, he is currently a Professor Emeritus of Sociology, and Principal Investigator at UNM's Center on Alcoholism, Substance Abuse, and Addictions, where he was a co-founder of CASAA.

He was the lead author on the first major population-based study released in October 2014 in the journal Pediatrics. That study was conducted in a Midwestern city and found rates of fetal alcohol syndrome disorder (FASD) that ranged from 24 to 48 per 1,000 children.

FAS and PFAS, May explains, are the most severe diagnoses along a spectrum of birth defects caused by maternal drinking during pregnancy. Children with FAS and PFAS have abnormal facial features, lifelong learning and behavioral problems because of damage to the developing brain and central nervous system that results in health issues involving hearing, vision, the heart, kidneys and bones.

“There is no safe level of alcohol to consume while you are pregnant. There is too much that is not known about how alcohol affects each individual woman differently during pregnancy to risk it, especially when we know the lifelong impact it can have on an individual child.” – UNM Professor Emeriti & UNC Research Professor Philip May 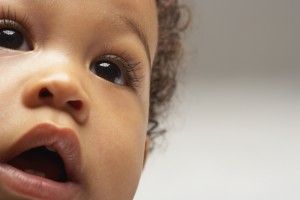 New estimates suggest between 3 and 8 per 1,000 children are affected by fetal alcohol syndrome (FAS).

The Rocky Mountain Study took four years and involved 2,300 first graders in 17 elementary schools. The students were screened for height, weight and head circumference. Children with a head measurement and height and weight below growth standards set by the Centers for Disease Control and Prevention were given a dysmorphology exam by qualified physicians. The children subsequently diagnosed with FAS or PFAS were given additional cognitive and behavioral tests. Randomly selected control samples from the school populations were given identical physical, mental and behavioral tests.

“We do these studies of major developmental disabilities in first grade populations,” May said, “because we can more easily identify a number of developmental challenges through the dysmorphology of the physical features, through the cognition and behaviors that they display and the IQ, executive function and memory tests we give. These disabilities might otherwise go unnoticed or not be identified correctly throughout the school years.”

May finds that clinically based or surveillance study methods capture only 15 to 20 percent of all children with FASD. “When we find severe cases, we find that only one in six have been diagnosed or even referred for diagnosis,” he said. “These children are out there in the mainstream population not performing well, but nobody is sure why. It is important for us to help these study communities understand particular concerns of child development including the whole spectrum of fetal alcohol spectrum disorders (FASD) from extremely mild to extremely severe so that prevention and remediation can start.”

May has studied FASD and some related disabilities since 1979. A large part of his research has focused on South African communities where he has been able to follow children for 15 to 20 years. He and his team, who also work in Europe and different parts of the United States, have found that there are interventions that can improve the prognosis of FASD children.

“We have nutritional and cognitive and behavioral interventions going on in several of the communities we study,” May said. “With help, the brain is able to repair itself in a number of ways and affected children can improve their capabilities significantly.”

No Safe Level
As part of the UNC NRI, an organization developing the field of precision nutrition, May’s research includes a broad range of studies that include understanding the nutritional, genetic and epigenetic factors that influence the risk for a child being born with FASD. But over the decades as May’s research has expanded in focus and global reach, he still comes back to one critical message.

“There is no safe level of alcohol to consume while you are pregnant,” he stressed. “There is too much that is not known about how alcohol affects each individual woman differently during pregnancy to risk it, especially when we know the lifelong impact it can have on an individual child. Furthermore, we now know that more children than previously thought are affected by drinking during pregnancy, so it is important to get the word out as much as possible.”

May has earned a number of prestigious honors during his academic career for his research in the FAS field. In 2011, May was selected to deliver the 56th Annual Research Lecture at UNM, one of the highest honors that can be awarded to a UNM faculty member. His lecture, titled “Adventures in Public Health Research: Four Decades of Shoe-Leather Epidemiology and Prevention,” shared key areas of his critical research, including 30 years of epidemiology research on behavioral health factors among a number of tribes of American Indians of the western states. He received an excellence award from the National Organization on Fetal Alcohol Syndrome in 2001 and a Starfish award in 2013.