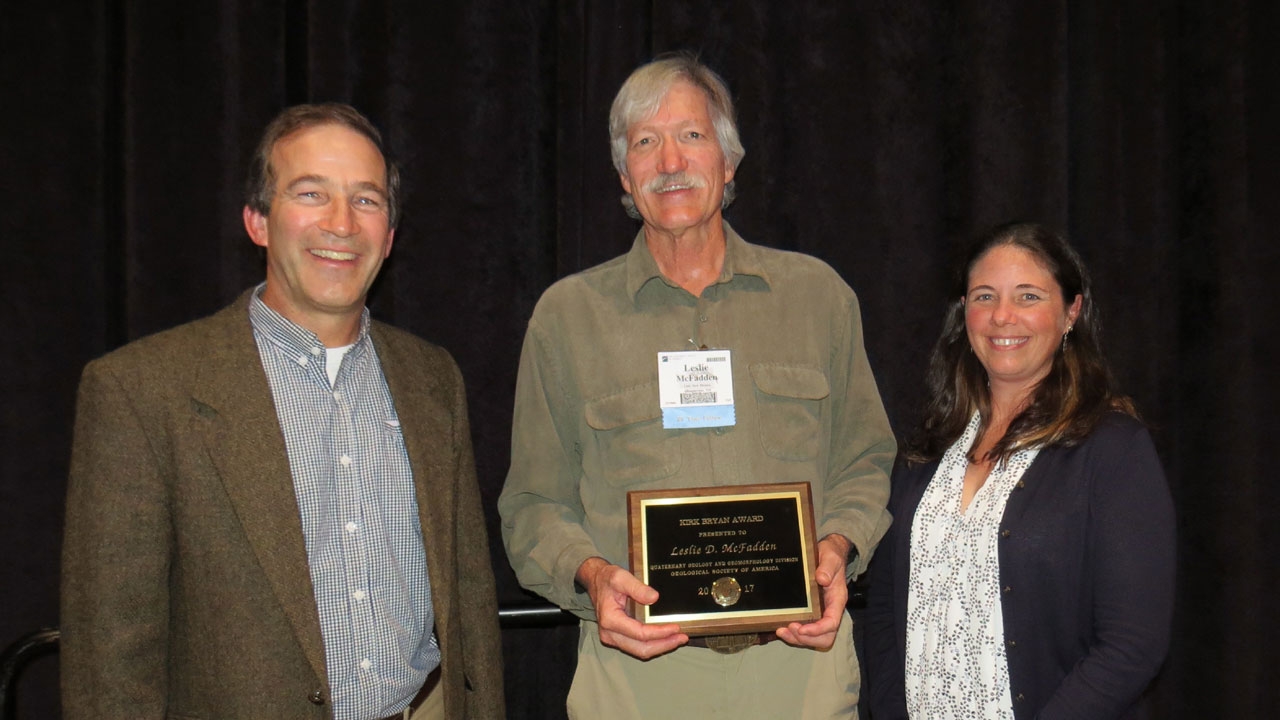 University of New Mexico Professor Emeritus Leslie McFadden is the 2017 recipient of the Kirk Bryan Award for Excellence awarded by the Geological Society of America (GSA) Annual Meeting & Exposition in Seattle, Wash. recently.

McFadden, who is a member of UNM Department of Earth and Planetary Sciences, was given the award in recognition of his lifetime contributions to the interdisciplinary field and for his publication titled, “Strongly dust‐influenced soils and what they tell us about landscape dynamics in vegetated aridlands of the southwestern United States,” which appeared in the GSA Special Paper 500 in 2013.

“I am deeply honored to have received the 2017 Kirk Bryan Award, and would like to thank Amy Brock-Hon, who spearheaded the nomination, those who submitted supporting letters, and the GSA Kirk Bryan Award committee for selecting this paper,” McFadden said.

McFadden’s research emphasis includes soil-geomorphic, soil-stratigraphic and soil-forming processes, and more generally the critical zone in arid and semi-arid regions. Other applications of soil-bases research include problems in Quaternary studies and geomorphology, including landscape evolution and paleoclimate, numerical modeling studies of calcic soils, and analyses of seismic, volcanic and flood hazards.

His current research includes biogeomorphic studies and evaluation of impacts of late Quaternary climatic changes on landscapes of the southern Colorado Plateau.

During his 35-year career in academia in the UNM Department of Earth & Planetary Sciences, McFadden served as the department chair for eight years, head of the department's Quaternary Program throughout most of his time at UNM, and has also served as chair of the Quaternary and Geomorphology Division of GSA.

Established in 1951, the Kirk Bryan Award is the Quaternary Geology and Geomorphology Division's named GSA award. The Award is bestowed upon the author of a published paper of distinction advancing the science. McFadden is the second UNM Earth and Planetary Sciences professor to receive the award. Grant A. Meyer also received the award in 1997.