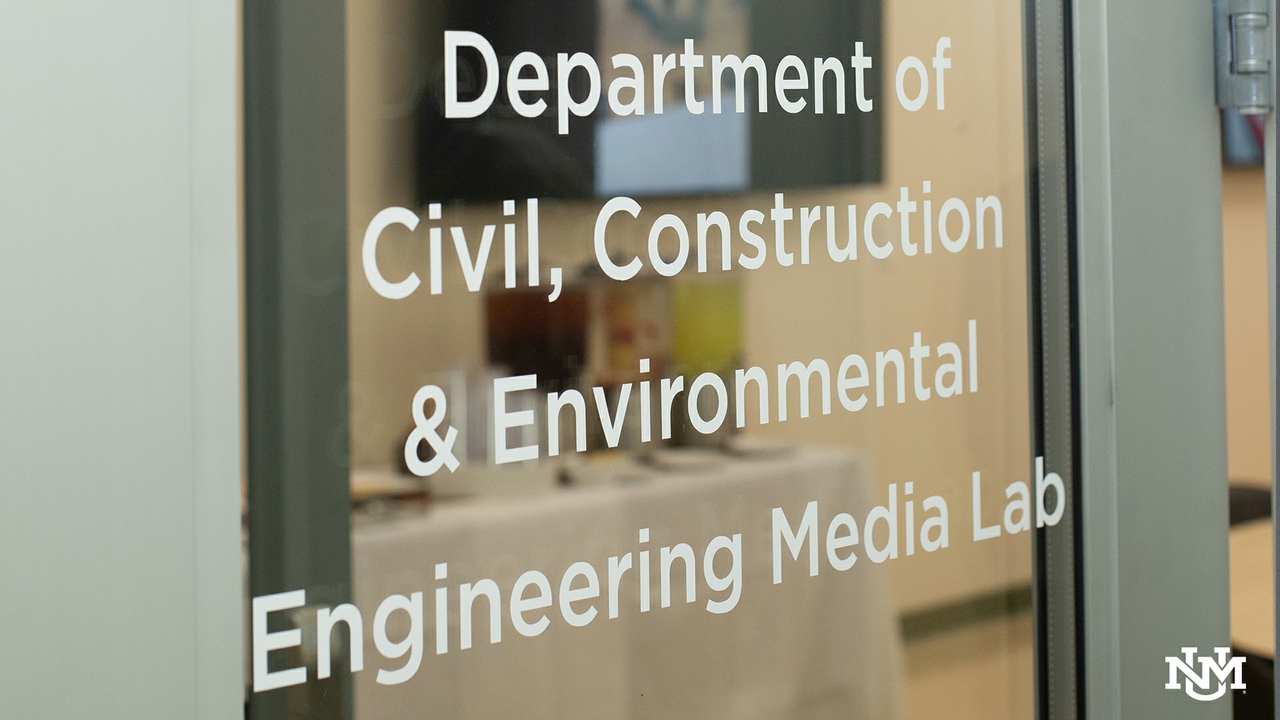 The University of New Mexico Department of Civil, Construction and Environmental Engineering (CCEE) officially celebrated the opening of a new donor-funded learning space on Nov. 1 in a ceremony attended by University and community officials.

The Media Lab, located on the third floor of the Centennial Engineering Center, is a modern, mixed-use space equipped with state-of-the-art technology that will be used for classes, presentations, meetings and as a student lounge/study area.

“This space represents a dream that came true,” said Mahmoud Taha, Distinguished Professor and chair of the CCEE department. “It is a step forward and a huge boost for students’ visual learning experience, especially in fields like BIM [building information modeling] and GIS [geographic information system].”

The space features five large screens (75" and 85"), two large projectors, speakers and cameras. The podium controls all the screens, projectors, speakers and cameras for classes and presentations. The camera allows for classes and presentations to be recorded or live-streamed over Zoom, which is ideal for remote or mixed-mode learning. In addition, the screens and projectors can be used simultaneously for a class/presentation or controlled independently by students or other small groups to share their laptop monitors during study sessions or class time enabling interactive learning.

Taha said the old space could accommodate only about 20 students, but the new space holds about 56 students.

There is also a small meeting room separated from the main area by windows and a door for student groups and private meetings. It will also have a large screen for sharing a laptop screen and a camera/speaker for recording meetings or streaming them online.

The furniture was designed to encourage collaboration, with large, round tables with power and wireless network connections, rolling glass dry erase boards and lounge seating. The windows will also have remote-control blackout shades.

Taha said the space cost around $400,000 and was 90 percent funded by a group of donors, which included the estate of Dana C. Wood. Taha announced he is continuing the fundraising efforts to cover 100 percent of the Media Lab cost.

Brian Burnett, former CEO of Bohannan Huston and president of the industrial advisory board for the Department of Civil, Construction and Environmental Engineering, said that Wood, an alumnus of the department who lost his battle with cancer in 2013, was a visionary man who always supported innovation. Wood hired Leslie Small at Bohannan Huston in 1985. Small is now the company’s chief operations officer and was in attendance for the opening ceremony.

Representing Bohannan Huston was Alandren Etlantus, a senior vice president at the company.

“Technology is a big part of who we are as a company, so we are pleased to be part of this lab,” Etlantus said, who earned a bachelor’s and master’s in civil engineering at UNM.

Those who are interested in supporting can donate to the Media Lab.