By Center for the Southwest September 25, 2017
Categories: Inside UNM College of Arts & Sciences History 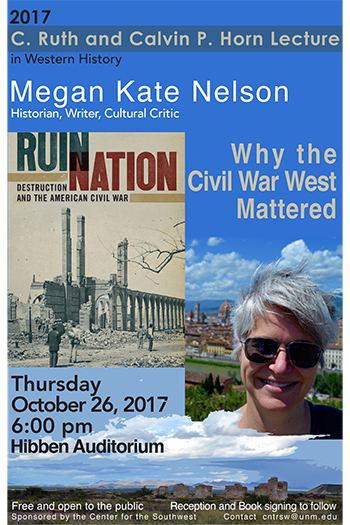 The Center for the Southwest announces the 2017-2018 C. Ruth and Calvin P. Horn Lecture in Western History and Culture. Historian Megan Kate Nelson will present “Why the Civil War West Mattered,” on Thursday, Oct. 26, at 6 p.m. in the Hibben Auditorium on the UNM campus.

The lecture will feature a discussion of the Civil War in the American West, a facet of the national conflict often overshadowed by bloody battles in the East. Nelson is the author of Ruin Nation: Destruction and the American Civil War (2012) and Trembling Earth: A Cultural History of the Okefenokee Swamp (2005). Nelson won a 2017 NEH Public Scholar Award for her current work in progress, Path of the Dead Man: How the West was Won – and Lost – During the American Civil War. The book will be published by Scribner in 2019.

Megan Kate Nelson is a writer, historian and cultural critic. Based in Lincoln, Massachusetts, she has written about Civil War and western history for the New York Times, The Chronicle of Higher Education and Civil War Times, and writes a regular column on Civil War popular culture, “Stereoscope,” for Civil War Monitor.  Her widely read history blog, Historista examines the “surprising and weird ways that people engage with history in everyday life.”

Nelson earned her BA in History and Literature from Harvard University and her Ph.D. in American Studies from the University of Iowa, and has taught at Texas Tech University, Cal State Fullerton, Harvard and Brown.

The event is free and open to the public. A book signing and reception will follow the lecture.

This event is sponsored by the Center for the Southwest and the Department of History at the University of New Mexico. For more information, email cntrsw@unm.edu or visit the center’s Facebook page.