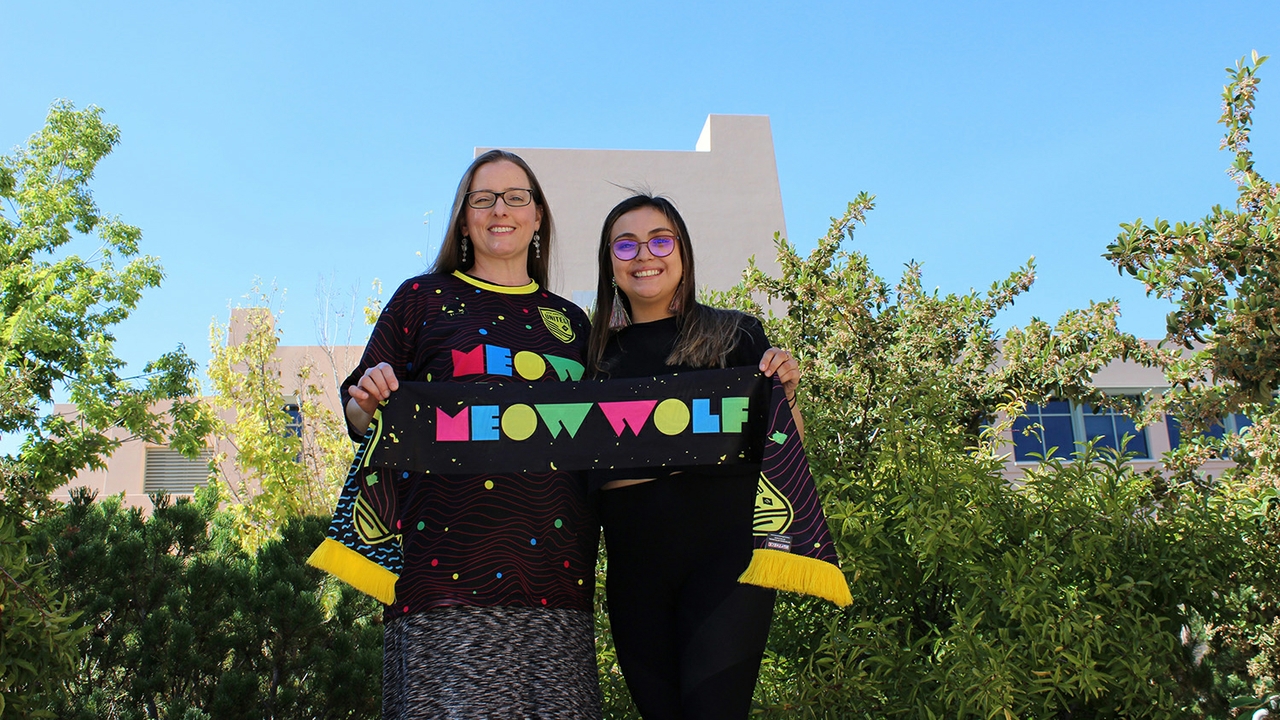 What can an electrical engineering undergraduate student and a master’s student in fine arts learn from a thriving multimedia art and entertainment complex that features a haunted house and immersive and unique exhibits?

Turns out, plenty. And of course, that place is Santa Fe’s Meow Wolf, which has been immensely popular since opening a few years ago and offers a perfect way to demonstrate the many ways in which art and science are interdependent.

“We have both scientists and artists here, and we have a lot in common. We’re the perfect petri dish.”  – Amy Traylor, UNM graduate student

In summer 2019, two students from The University of New Mexico were interns at Meow Wolf, with each finding the experience memorable and valuable, even though the students are in completely different programs.

Stacie Hernandez, a senior in the Department of Electrical and Computer Engineering in the School of Engineering, was expecting to spend the summer in the lab of Distinguished Professor Edl Schamiloglu, researching pulsed power, but instead found an internship opportunity in April at Meow Wolf. She thought she was too late to apply, but did so anyway since they were in need of electrical engineers to work on the ever-growing electronic displays. Her initiative paid off, and she was selected for an internship that started in mid-May and lasted until right before school started in August.

Hernandez was a member of the tech team, working primarily on the creation of custom printed circuit boards (PCBs) that power a lot of the interactive exhibits at Meow Wolf. She said since Meow Wolf is a rapidly expanding venture and offers guests a uniquely interactive experience, Meow Wolf is increasingly relying upon custom-built electronic devices, which has created a need for engineering expertise, not just artists.

She said the experience taught a few things that she might not have learned working at the UNM high-power microwave lab.

“I’m used to dealing with high-power devices, so I learned that even smaller devices can be very powerful,” Hernandez said. “DC-to-DC power generates a lot of heat, getting up to 200 Fahrenheit, and I learned to respect smaller devices a lot more.”

That’s also where the engineering side meshes with the artistic side. Although Hernandez didn’t work directly with artists, she said she learned how engineers must take into consideration an artist’s goal or intention. For instance, if an electronic device runs too hot, it may not be appropriate for an artistic display and could overheat or damage the art, so constant communication between the artistic and the engineering side is a must.

Hernandez has previously worked in engineering-centric environments, such as governmental laboratories, so she especially enjoyed the fun, collaborative and creative environment at Meow Wolf.

“It was my first internship not with the government,” she said. “There, it’s a very serious environment, but Meow Wolf was focused yet a lot of fun. I met a lot of people from all over the country and from different backgrounds, but we were all there doing our jobs together for Meow Wolf.”

Hernandez is planning to continue her studies after graduating next year, pursuing a master’s degree under Schamiloglu, and would eventually like to work in a place like Sandia National Laboratories, although she’s open to other opportunities. “Meow Wolf said, ‘Our door is always open,’ so you never know,” she said.

Amy Traylor, who already holds a master’s in art education, also spent the summer as an intern at Meow Wolf. Her situation was a bit different than Hernandez’s, as she spent 15 years teaching (the last five teaching computer programming) and is now pursuing an MFA degree in Experimental Art & Technology in the Department of Art in the College of Fine Arts.

Traylor spent the summer at Meow Wolf doing a lot of coding, something she is quite passionate about. Specifically, Traylor was writing software for computer vision devices, which is key to a lot of Meow Wolf’s immersive experiences.

Traylor says she is a self-taught coder, having taken a coding class in high school and “hating it,” so she just figured that she wasn’t good at it and gave it up for a while but later decided to give it another try. She discovered that a lot of the way coding had been taught turned off a lot of students because the application of the coding wasn’t apparent — it was just coding for coding’s sake. Traylor said for a lot of students like herself, combining coding with art creates a eureka moment that opens the door to understanding.

She says that coding has been proven to increase reading comprehension, and that contrary to conventional belief, it’s not math scores that predict coding prowess — it’s pattern recognition.

At UNM, she teaches a class called Computer Programming for Artists, which is made up of about half computer science students. Her goal with the class is to teach artists who think they can’t learn code that they can, in fact, code, and for those who do know coding to think of it in a different and more creative way.

She feels that New Mexico is a great place to greatly expand art and science collaborations like Meow Wolf.

“We have both scientists and artists here, and we have a lot in common,” Traylor said. “We’re the perfect petri dish.”

“There is a myth that there are no jobs in the arts, and that’s just not true,” she said. “Especially when artists combine their skills with coding, that opens up a whole new world of career possibilities, from animators at Disney-Pixar to sound engineers to virtual reality to 3D printing. There are so many industries that can use these skills. I would like to help bridge that gap.”

She said that the growing Meow Wolf enterprise — which is expanding to Las Vegas, Denver, Phoenix and Washington, D.C. — is proof that there is great demand for the integration of the traditionally opposite and unrelated fields.

“Everything they do at Meow Wolf is a validation of everything I do — showing the interdependence of art and science,” she said.

This semester, the School of Engineering and the College of Fine Arts have begun collaborating on a bachelor of arts in film and digital arts degree program where students can earn a concentration in gaming and animation with a minor in computer science. For more information, visit College of Fine Arts.