An old bowling alley on the south side of Santa Fe has undergone an artistic transformation that promises visitors a unique, multisensory art experience like they have never encountered before. As Meow Wolf gains national attention and accolades, current and former Lobos say they are thankful to be a part of this unprecedented arts and entertainment experience.

It is apropos that the newly-renovated Meow Wolf Art Complex was born out of a partnership between Meow Wolf, an arts and entertainment production company, and well-known “Game of Thrones,” author George R.R. Martin.

The old Silva Lanes bowling alley had been on the market for six years, with only minimal interest. Meow Wolf CEO Vince Kadlubek worked for George R.R. Martin at Martin’s Jean Cocteau Theater and thought Martin might be interested in the prospect of owning the building.

Over the course of four months, Martin and Meow Wolf hammered out the details. The building was purchased and almost immediately began a transformation. The front of the building was adorned with larger-than-life sculptures loudly announcing Meow Wolf’s presence. 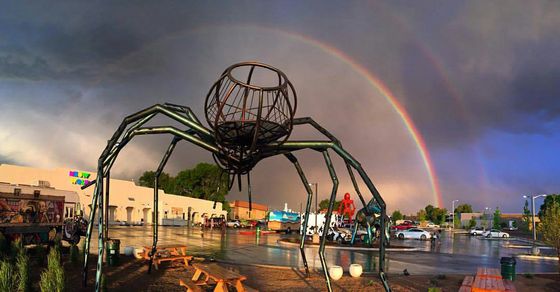 The centerpiece of Meow Wolf’s Art Complex, is a recently opened, 20,000 square-foot permanent attraction called the “House of Eternal Return”— an explorable wonderland built for audiences of all ages.

Built on the premise, “Something has happened inside a mysterious Victorian house that has dissolved the nature of time and space.”  Each visitor is invited to choose their own path through the exhibition—walking, climbing, and crawling through “an imaginative multiverse of unexpected environments.” Visitors are encouraged to figure out what happened to the family from Mendocino, Calif. living in the Victorian house in the midst of a dimensional rift.

The scope of this project is made possible by a mastermind of many artists. Adding to this unique experience is artwork and talent by UNM College of Fine Arts (CFA) alumni and students.

Russell Bauer, who received his Master’s in Fine Arts (MFA) in Art & Ecology at UNM, has his original work of art, “Livestock BETA” displayed as part of the house. The sculpture was originally created for his master’s thesis project, “Eat Me.”

The hanging chrysalis-like pod has a three-point computer vision system that allows the sculpture to track movement around it and respond to changes in its environment. During the “Eat Me” exhibition, food grown within the three Livestock pods was harvested and fed to viewers through a series of performances.

UNM alumna Kristen Woods spearheaded the performance aspect of “Eat Me,” which included aerialists on silks serving the food grown from the BETA.

Later, it was Woods who connected Bauer to Meow Wolf ultimately leading to the prototype being fitted with fake plants for permanent display in the “House of Eternal Return.”

“I installed my piece at Meow Wolf, and then came back to help them out because I believe in their mission and want to support the cause as so many folks do,” says Bauer. “There are so many facets in this unique world to explore.”

Larry Bob Phillips, another UNM CFA MFA graduate, painted the murals in the entrance and the eyeballs in the back hall lining the permanent exhibition.

Meow Wolf’s “House of Eternal Return” is becoming well-known nationally. The New York Times captured the experience by writing, “nothing about this work of art is behind velvet ropes.”

But there are multiple people running the project’s day-to-day operations behind-the-scenes. One such person is UNM student Chris Clavio, who took a sabbatical from studying in the Electronic Arts program to pursue fulltime work with Meow Wolf.

Chris Clavio, who studied in UNM's College of Fine Arts Electronic Arts program, working on the laser harp at Meow Wolf. Clavio lead the team that installed most of the low voltage infrastructure systems.

“Working at Meow Wolf is super fun—it’s like a Disneyland exhibit,” said Clavio. “Working day-to-day here is quite an experience.”

Clavio credits Meow Wolf with breaking down traditional barriers for artists. The exhibit is comprised of many different works of art created by professional and amateur artists.

“You can be classically trained or have attended art school.” Says Clavio. “It takes a different approach from traditional art in Santa Fe.”

Working with the daily tech team at Meow Wolf is only part of Clavio’s contribution to the project. During its installation, he helped design many of the low voltage infrastructure systems and lead the team that installed most of them. This includes all of the LED lighting in the show, the network backbone and surveillance system.

“The project could not have been a better fit for my skill set,” said Clavio. “A huge amount of the skills I used on Meow Wolf were due to my education in the Electronic Arts program as well as my employment at the UNM ARTS Lab. There I had mentors like Associate Professor Claudia X. Valdes and Associate Director of Immersive Media David Beining who were big advocates for my education and success as an artist.”

Initially, Meow Wolf expected around 100,000 visitors annually to the “House of Eternal Return.” Having only been open since March, the exhibit has already surpassed this attendance expectation thus solidifying itself as one of the premiere family attractions for both locals and tourists. 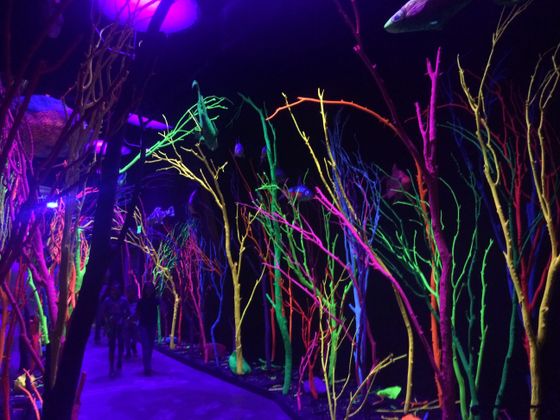