Dinosaurs dominated the landscape for more than 100 million years, but all that remains today are bones. This has made it difficult to solve a long-standing and contentious puzzle: were dinosaurs cold-blooded animals that lumbered along or swift warm-blooded creatures as depicted in Jurassic Park?

The answer, according to scientists at the University of New Mexico, is neither. Instead, dinosaurs took a middle path between warm-blooded mammals (‘endotherms’) and cold-blooded reptiles (‘ectotherms’).

“Most dinosaurs were probably mesothermic," said John Grady, a graduate student at UNM who led the research. “A thermally intermediate strategy that only a few species ­– such as egg laying echidnas or great white sharks – use today.”

The study, Evidence for mesothermy in dinosaurs, released today in the prestigious journal Science, is the first to quantitatively explore the relationship between growth rate and metabolic rates in animals and extend that to long extinct animals such as dinosaurs.

The research, supported by fellowships from the NIH funded Program in Interdisciplinary Biology and Biomedical Science (PiBBs) to Grady and two fellow graduate students, Eva Dettweiler-Robinson and Natalie Wright, was supervised by Professor and PiBBs Director Felisa Smith from the University of New Mexico, and Professor Brian Enquist from the University of Arizona. 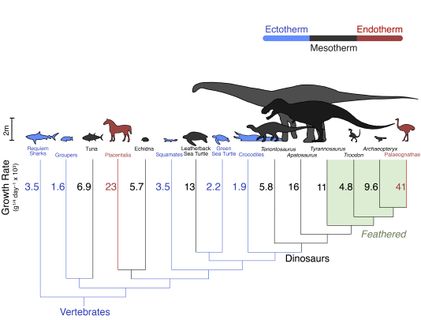 Growth rates across an evolutionary tree. Dinosaurs growth rates fall in between warm blooded mammals and birds ('endotherms') in red, and cold-blooded fish and reptiles ('ectotherms') in blue. They are closest to living mesotherms. Illustration provided by John Grady.

Using an extensive database of animal growth and energy use developed by Grady, researchers first demonstrated that animals that grow faster, not only require more energy, but have higher body temperatures. Then, using growth estimates made by paleontologists for extinct dinosaurs, the researchers calculated dinosaur metabolic rates. The result was unexpected: dinosaurs were clearly intermediate between modern mammals and reptiles.

"I think we were all surprised by this," Smith said. "The idea certainly took some getting used to. But, the patterns were so robust." Grady analyzed the data with help from Dettweiler-Robinson and Wright. "John spent years compiling this information’, said Dettweiler-Robinson. "Collecting more than 30,000 rows of data was quite a feat."

The researchers found that feathered dinosaurs and primitive birds grew distinctly slower than their descendants, modern birds. ‘Archaeopteryx, the first bird’ explains Grady, ‘took two years to reach maturity.  But, a red-tailed hawk, which is about the same size, only takes 6 weeks’.  While dinosaurs didn’t grow as fast as modern birds or mammals, they did grow significantly faster than modern reptiles.

“This higher energy use probably increased speed and performance,” Grady said. “Mesothermic dinsoaurs were likely faster predators or better able to flee from danger than the large reptiles found earlier in during the Mesozoic.” Dinosaurs quickly became the new ecological incumbents.

Mesothermy in dinosaurs may have helped them become ecologically dominant and probably also helped them become enormous. “A lion the size of a T-Rex,” said Smith “while a frightening thought, would quickly starve to death because it would be so hard to find enough food.” By adopting a medium-powered energetic strategy, mesothermy may have provided the perfect solution. "It allows a performance advantage over ectothermic reptiles," Grady said. ‘but without the high overhead costs of modern birds and mammals. In any case, it was a successful formula for a long reign in the Mesozoic," Smith added.