The University of New Mexico School of Architecture & Planning recently hosted a group of architecture students from Anáhuac University in Mexico City. They participated in a two-week program during which they traveled cultural and historic sites in Santa Fe, Acoma and Taos. They visited the Sandia Peak Tramway and Dekker Perich Sabatini architectural firm.

UNM’s architecture program and Anáhuac’s began their relationship last summer when UNM students went to Mexico for a cultural and an urban experience unlike Albuquerque.

“The students were exposed to indigenous, colonial and ultra-modern architecture co-existing in various Mexican cities, including in a super-metropolis like Mexico City,” said School of Architecture & Planning Dean Geraldine Forbes Isais.

The Anáhuac students not only saw sites, but also explored the lives of Mexicans living on the U.S. side of the border. Their final project was, in teams of two and three, to identify ways to improve life for Mexicans – and others – in Albuquerque.

Francisco Uviña, visiting lecturer III and interim director of the Historic Preservation and Regionalism program in the School of Architecture & Planning, did his thesis studio project on Mexican immigration in Albuquerque.

“I gave them a presentation on the context of Albuquerque, where things are located and the sectors in town that have the largest numbers of immigrants. I also talked to them about Albuquerque’s Mexican immigrant community,” Uviña said.

“After discovering the essence of Albuquerque and New Mexico, they studied the immigrants – how they feel when they come here,” said Juan Pablo Paredes Mier, course instructor.

The 13 students discovered that New Mexico is a “pass through” state for immigrants seeking greater economic opportunities, as well as a place where many Mexicans have set down roots.

“Coming from México City, we see ourselves in New Mexico. Where’s the accent?” Paredes asks. He said that although Mexico City is a big city, size doesn’t matter. “There, every day there is a survival test. Here, there is time to stop and reflect on our lives and absorb our surroundings. I tell the students that in the future they will see different cities with different eyes,” he said.

Paredes isn’t just a teacher; he is also student and practitioner. “I am going to Madrid in July to present my doctorado [Ph.D.] at CEU San Pablo. It is on my work with Ricardo Legorreta,” he said, adding that both his father and grandfather were from Spain. Paredes work is predominately in housing, particularly in coastal and country houses.

Of New Mexico, he said, “I haven’t left yet, and I already want to come back.”

Ana Mangino
One of the students in Paredes’ class isn’t new to UNM. She has been at the School of Architecture & Planning since January, doing a study abroad semester here. Ana Mangino was pleased to learn that the course from Anáhuac was being offered here. 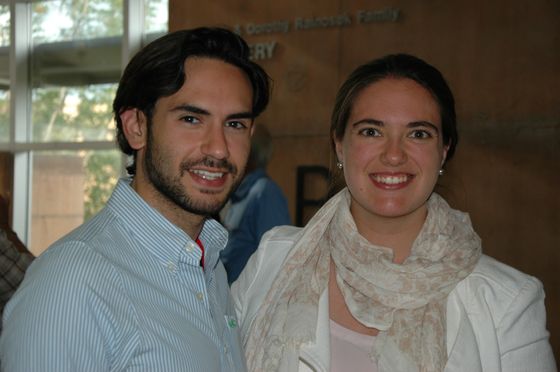 David Massarano and Ana Mangino are happy to be finished presenting their project.

“I liked getting to do the actual design of a downtown park. We could put anything in it we wanted to. I included a skate park and a climbing wall,” she said, adding that they also designed a cemetery. “I really like the creative expression and the manual aspects of landscape studio projects,” Mangino said.

She is strongly considering returning to UNM to pursue a master’s in landscape architecture. “But before I do that, I want to go back to Mexico to see if landscape is really what I want to do,” she said.

Mangino sees big possibilities for using a landscape architecture degree in Mexico. “Lack of sidewalks and trash are some of the issues. I want to go back to do something for my country,” she said.

She got to put her architecture and landscape skills to work in her team project for Paredes’ class. She and her collaborator David Massarano created K7, “Who is an Immigrant?” “We explored who are the immigrants in Albuquerque and New Mexico. They come from Mexico – from Sonora, Chihuahua and Coahuila. We looked at what kinds of services they need, like medical care. We designed a space where migrants learn the language and culture, get skills training, find work, learn the laws and rules and perhaps even sell folk art,” she said.

Mangino said that when she first came to UNM she felt out of place. “Now I am at home here. I should have come here first. I love UNM and the architecture school.”

Forbes Isais said that she anticipates the relationship continuing.

“We were glad we were able to let the Anáhuac students use our studio space for their projects. They want to come back and we want to send some more students down,” she said.

The UNM School of Architecture & Planning had support for this program from Angelica Careaga, director of UNM’s Mexico City Office, the Global Education Office and the Office of the Vice President for Student Affairs.