The University of New Mexico is currently displaying the monumental Alebrije (folk art sculpture) “Xólotl: Dios Perro” (Dog Diety) in the main lobby of the Center for the Arts building. The piece is on loan to UNM from the Mexican Cultural Center through the Consul of Mexico in Albuquerque Efren N. Leyva Acevedo.

Created by Óscar Becerra-Mora, a Mexican contemporary artist, Xólotl is a representation of the Aztec God who was Lord of the underworld, and brother of Quetzalcóatl, the feathered serpent. Xólotl was charged with protecting the sun as it passed through the underworld. It is said that he helped his brother in the creation of the humankind.

“The Consulate of Mexico encourages Mexican artists such sculptors and painters to consider publicly exhibiting single or multiple pieces of art from their collections abroad,” saya Levya. “The motive for lending this piece was to showcase Mexico’s version of the fantastical creatures that are part of the collective imaginations of cultures throughout the world in a very public way.”

Alebrijes each have a distinct look. Xólotl’s defining quality is his ability to transform into other figures, animals or objects and his features including wings, horns, tails and claws are taken from various animals. 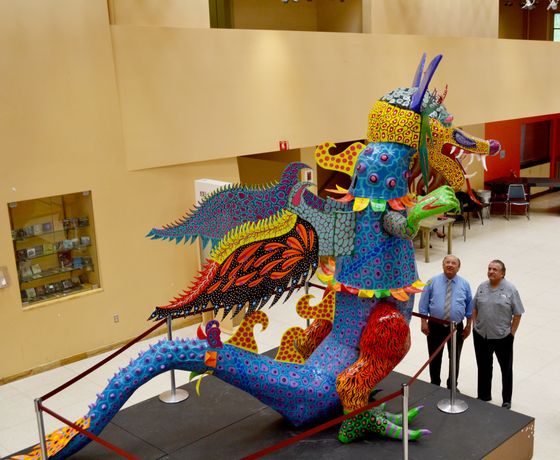 Created by Óscar Becerra-Mora, a Mexican contemporary artist, Xólotl is a representation of the Aztec God who was Lord of the underworld and brother of Quetzalcóatl, the feathered serpent.

Vice President for UNM Student Affairs Eliseo ‘Cheo’ Torres, worked with Levya’s office to ensure that the piece could be displayed on the UNM campus. Torres is excited about this and other collaborations which have formed between the two entities.

“The alebrije is a great way for us to learn more about different cultures,” said Torres. “What better way to start a conversation about diversity, culture and differences than by placing a 14 ft. colorful piece on our campus.”

Regina Carlow, associate dean for the UNM College of Fine Arts is excited to have the alebrije on campus.

“This colorful piece will not only entertain College of Fine Arts students and Popejoy patrons, it has already delighted a number of future Lobos who are attending our arts and music programs this summer,” she said. “The sculpture arrived on the first day of our Arts Access camp for more than 40 children. They were ecstatic to see what they thought was a gigantic and colorful Lobo standing in the middle of the lobby. The children ended their first day sitting in front of the alebrije listening to a concert of Mexican music performed by UNM Music students.”

Alebrijes originated in the 1930s after Pedro Linares, a Mexican artisan, fell ill and dreamt of a strange place resembling a forest where several animals and creatures were shouting “alebrijes!” When he woke up he began recreating the creatures he saw in cardboard and papier-mâché.

This type of art is often compared to gargoyles in Gothic cathedrals, dragons in Asian cultures, various creatures in Greek mythology and Persian and Egyptian religious traditions.

Xólotl will be on display through Friday, Sept. 2. For more information on the exhibit contact A.J. Carian with the College of Fine Arts at 505-277-2112 or ajcarian@unm.edu.