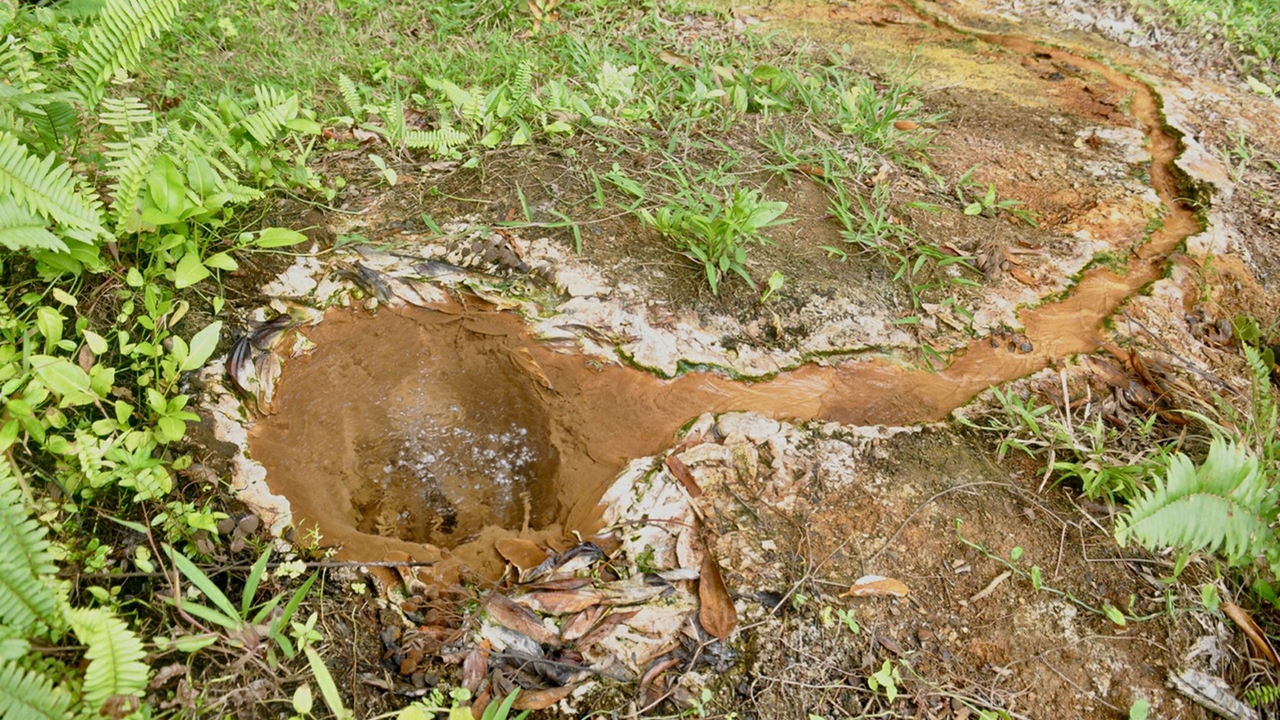 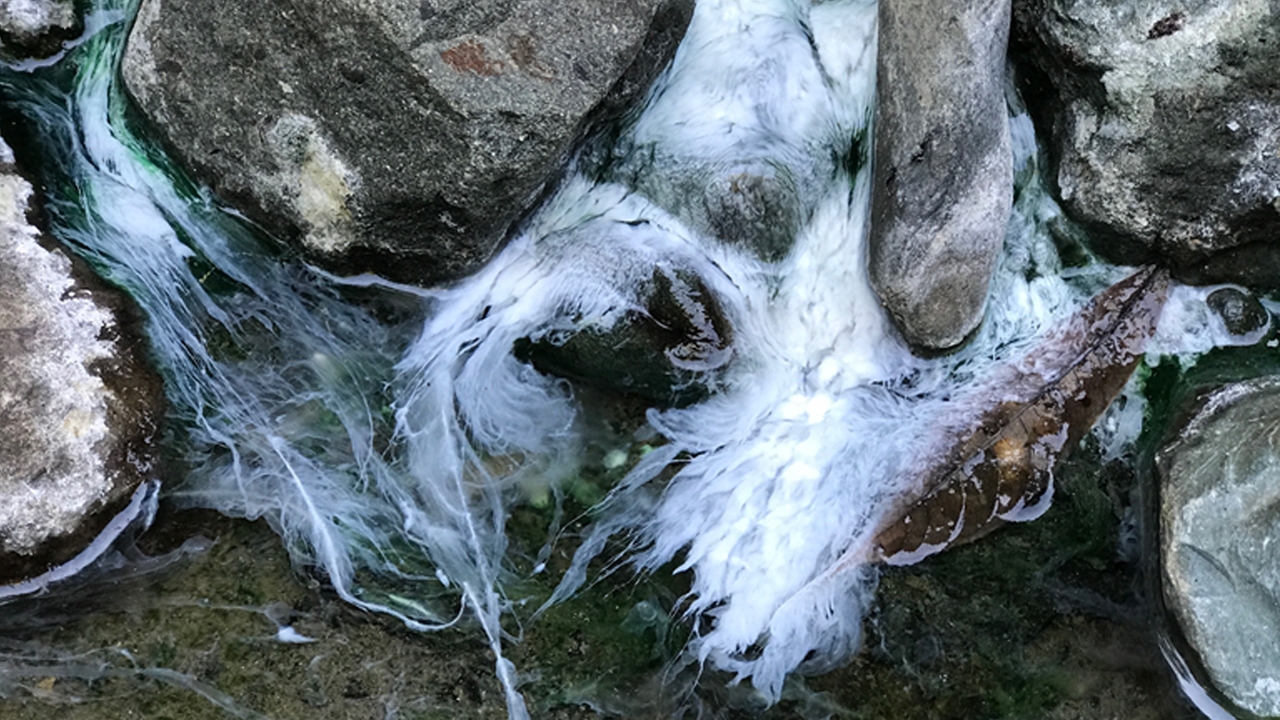 Biofilm in a natural seep

Microbes may act as gatekeepers of Earth’s Deep Carbon

Two years ago a team of scientists visited Costa Rica’s subduction zone, where the ocean floor sinks beneath the continent and volcanoes tower above the surface, to find out if microbes can affect the cycle of carbon moving form Earth’s surface into the deep interior.

This groundbreaking study, published in Nature today, shows that microbes do in fact consume and – crucially – help trap a small amount of sinking carbon in this zone. This finding has important implications for understanding Earth’s fundamental processes and for revealing how nature can potentially help mitigate climate change. 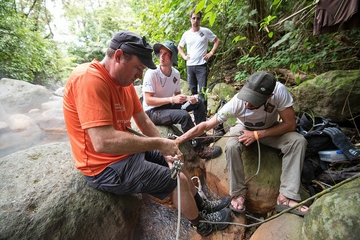 Among the scientists on the team were University of New Mexico Professor Tobias Fischer, and Assistant Adjunct Professor Maarten de Moor, who is also co-author and Professor at the National University of Costa Rica’s Observatory of Volcanology and Seismology.

“It is amazing to consider that tiny microbes can potentially influence geological processes on similar scales as these powerful and visually impressive volcanoes, which are direct conduits to Earth’s interior.” – Professor Maarten de Moor

The scientists discovered at a subduction zone there is communication between Earth’s surface and interior. Two plates collide and the denser plate sinks, transporting material from the surface into Earth’s interior. Showing that the microbes at the near-surface are playing a fundamental role in how carbon and other elements are being locked up into the crust provides a profound new understanding of Earth processes and helps researchers model how Earth’s interior may develop over time.

Professor Chris Ballentine, head of the Department of Earth Sciences at the University of Oxford and co-author said, “What we’ve shown in this study is that in areas that are critically important for putting chemicals back down into the planet – these big subduction zones – life is sequestering carbon. On geological timescales life might be controlling the chemicals at the surface and storing elements like carbon in the crust.” 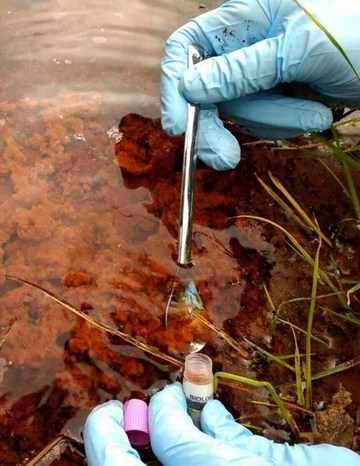 This is the first evidence that subterranean life plays a role in removing carbon from subduction zones. It has been well established that microbes are capable of taking carbon dissolved in water and converting it into a mineral within the rocks. Our work showed that this happens on the large scale across a subduction zone. It is a natural CO2 sequestration process which can control the availability of carbon on Earth’s surface.

“It is amazing to consider that tiny microbes can potentially influence geological processes on similar scales as these powerful and visually impressive volcanoes, which are direct conduits to Earth’s interior,” said de Moor. “The processes that we have identified in this study are less obvious, but they are important because they are operating over huge spatial areas in comparison to volcanoes.’

During the 12-day expedition, the group of multi-disciplinary scientists collected water samples from thermal springs throughout Costa Rica. Scientists have long predicted that these thermal waters spit out ancient carbon molecules, subducted millions of years before. By comparing the relative amounts of two different kinds of carbon – called isotopes – the scientists showed that the predictions were true and that previously unrecognized processes were at work in the crust above the subduction zone, acting to trap large amounts of carbon.

Following their analyses, the scientists estimated that about 94 percent of that carbon transforms into calcite minerals and microbial biomass.

“We found that a substantial amount of carbon is being trapped in non-volcanic areas instead of escaping through volcanoes or sinking into Earth’s interior,” said lead author Peter Barry, who carried out the research while at the Department of Earth Sciences, Oxford University. “Until this point scientists had assumed that life plays little to no role in whether this oceanic carbon is transported all the way into the mantle, but we found that life and chemical processes work together to be the gatekeepers of carbon delivery to the mantle.” 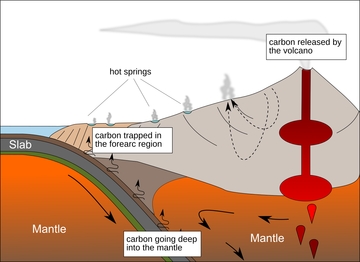 How carbon changes near volcanic chains.

Fischer started working on fluids in the forearc of Costa Rica about 10 years ago. At the time, de Moor was conducting doctorate research at UNM on volcanoes in Central America and the East African Rift. After graduating in 2013, de Moor moved to Costa Rica and the National University and OVSICORI to work on volcanic degassing and volcano monitoring.  There, he set up a gas analysis laboratory similar to that at UNM.

The fluid samples studied by the team were collected and analyzed for gas compositions and carbon isotope compositions of CO2 at this new laboratory using the techniques de Moor learned at UNM. Fischer, de Moor, and Hyunwoo Lee, who also earned his Ph.D. from UNM in 2015, further studied nitrogen systematics in the Costa Rican forearc in a previous campaign resulting in new insights into nitrogen sources at subduction zones.

This project was initiated to some extent with an original National Science Foundation grant by Fischer, and now deceased David Hilton from Scripps Institution of Oceanography.

“We set out to collect water samples in the Nicoya forearc back in 2007 to investigate the process of carbon and nitrogen release from the subducting slab in the forearc and therefore affect how much of it goes down into the deep mantle,” said Fischer. “Lee published the results on nitrogen after we did some more sampling back in 2015. The project that has resulted in the Nature paper, in a sense, is built on the idea of the effect of the forearc on the carbon budget and used some of the original gas samples we collected.”

The researchers now plan to investigate other subduction zones to see if this trend is widespread. If these biological and geochemical processes occur worldwide, they would translate to 19 percent less carbon entering the deep mantle than previously estimated.

Overall, the study shows that biology has the power to affect carbon recycling in subduction zones. “We already knew that microbes altered geological processes when they first began producing oxygen from photosynthesis,” said coauthor Donato Giovannelli, Assistant Professor at the University of Naples ‘Federico II.’ “I think there are probably even more ways that biology has had an outsized impact on geology, we just haven’t discovered them yet.”

The Deep Carbon Observatory is a global community of more than 1,000 scientists working to better understand the quantities, movements, forms and origins of carbon inside Earth. Sponsored by the Alfred P. Sloan Foundation, the DCO sheds unprecedented light on Earth's highly active subterranean environment, including the secrets of volcanoes and diamonds, sources of oil and gas, and the origins of life itself, contributing to new understanding of this and other planets. The DCO will issue its final report in October 2019 after a decade of work.