Breathing rarified air high in the Andes at an average altitude of 13,000 feet presents certain unique challenges for any living organism. But for small birds such as wrens, it presented an opportunity to adapt to the challenges of the altitude and environment.

Scientists at the University of New Mexico and the University of Nebraska-Lincoln (UNL) have pinpointed a genetic change at a single, mutation-prone site that ultimately allows wrens to breathe easy in the rarefied air of the Andes. This suggests that sites in the genome that mutate quickly are more likely to contribute to adaptation.

These findings resulted from the Master’s Thesis of former UNM Biology student, Spencer Galen, and were published Oct. 12 in the Proceedings of the National Academy of Sciences in a paper titled, Contribution of a mutational hot spot to hemoglobin adaptation in high-altitude Andean house wrens.

Galen’s advisor, Christopher Witt, co-led the study along with Jay Storz of UNL. “The house wren is one of the most widespread songbirds in the New World, and it thrives in part because it has genetically adapted to local environments,” said Witt, who is also curator of birds at UNM’s Museum of Southwestern Biology (MSB). “We found a hemoglobin gene variant in the house wren that confers a benefit at high altitude and we’ve shown that altitude predicts the proportion of individuals in a population that will have that variant.”

The research, enabled through a grant from the National Science Foundation (NSF) through its Genetic Mechanisms program, involved molecular evolution from random changes in DNA, and how natural selection eliminates some of the changes and retains others.

The project also addressed the causes of evolution, and the possibility of predicting evolutionary change by studying birds living at high altitude in the Andes, and their close relatives living at low altitudes. The question researchers wanted to answer involved the adaptation of different species to a similar environmental challenge; would they adapt by similar or different changes to the DNA?

The authors concluded that there may be many possible mutations that can produce the same favorable change in a trait, natural selection often seizes upon those that occur at an especially high rate -- an evolutionary equivalent of "first come, first served," the authors said.

The researchers came to the conclusion after analyzing blood samples from 140 house wren specimens that UNM Department of Biology Associate Professor Christopher Witt and fellow UNM researchers collected during an expedition to the Andes. 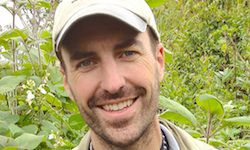 Chris Witt, curator of birds, UNM Museum of Southwestern Biology, in the field.

The team's study of Andean wrens examined evolutionary changes in the functional properties of hemoglobin, the protein that transports oxygen from the lungs to body tissue. Oxygen concentration falls as altitude rises, making the protein's ability to capture oxygen molecules especially critical among wrens and other animals that live at higher elevations.

"We know from previous research that there are many possible mutations that can produce an increase in hemoglobin's affinity for oxygen," said Storz, a Susan J. Rosowski Professor of Biological Sciences at UNL. "However, the particular mutations that actually contribute to evolutionary changes in protein function may represent a biased, nonrandom subset of all possible mutations capable of producing the change. Our results suggest that variation in mutation rate may be an important source of such bias.”

The researchers also measured the frequency of the affinity-enhancing mutation in highland versus lowland wrens, discovering that the mutation predominated only in the high-altitude population. To test whether the altitudinal difference in mutation frequency was caused by natural selection, the team then examined patterns of variation at DNA sites scattered throughout the species' genome.

“Even though house wrens occur all up and down the Andean slopes, they’re able to specialize on their altitude, optimizing breathing for peak performance where they live,” Witt said. “That’s amazing in itself and it shows a very different pattern of genetic adaptation from high-altitude humans — perhaps this shouldn’t be surprising considering that house wrens have been at altitude 2-3 million years longer than humans have.”

The MSB specimen collections at UNM have helped produce world-class science throughout the years. This entire study was based on MSB’s bird and genomic resources collections where Witt is also the assistant director.

“Having an international collaborative team allows us to conduct multi-faceted studies of animals and the ways in which their proteins help them adapt to specific environments,” Witt said. “With this team, I suspect that many more of the evolutionary secrets of montane species will be discovered in the near future.”