National Endowment for the Humanities chairman comes to UNM

As part of an effort to spur the transformation of graduate education in the humanities, the chairman of the National Endowment for the Humanities (NEH) visited The University of New Mexico to speak with students and faculty about the role the discipline can play in the world’s economy.

Dr. William Adams, a veteran and former president of Colby College, has served as the NEH chairman since 2014. Last year, the NEH announced its Next Generation Humanities Ph.D. program – an effort designed to help colleges and universities create new and innovative models for doctoral education in the humanities that incorporate broader career preparation for Ph.D. candidates.

According to the NEH, most humanities Ph.D. programs in the United States still prepare students primarily for faculty positions in academia, even though those positions are in short supply. The hope is that through NEH funding, institutions can start discussing the way they teach humanities courses at the doctoral level to prepare students for more diverse careers paths.

“I’m very happy that The University of New Mexico applied and has now received a planning grant from NEH in this very interesting grouping of departments and programs,” said Adams during the UNM event. “It was one of the more interesting, in my mind, applications that we received.” 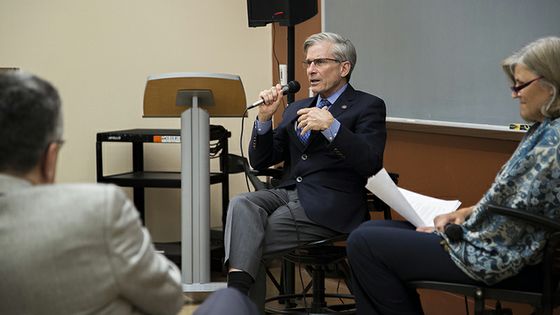 Dr. William Adams, chairman of the National Endowment for the Humanities

The UNM initiative titled, “LoboHUB(Humanities Unbound): Planning for the Next Generation of Humanities Scholars at UNM” will bring together the humanities disciplines, Graduate Studies, alumni networks and professional communities in order to discuss how to transform existing doctoral programs into education models that prepare humanities scholars for careers in many different professions—both inside and outside academia.

During the UNM event, dozens of graduate students, faculty and administrators asked questions and had an open discussion with the chairman about the initiative and the future of humanities education. According to Adams, to bring real, substantive change, two aspects are imperative.

“The first dimension [of this effort] is to begin to talk differently to graduate students about what professional opportunities await them when they leave Ph.D. and masters programs in the humanities,” he said. “Secondly, is to think about the curriculum and how we need to reshape the curriculum to make those broader professional opportunities, not just available, but to train [students] in ways that make sense in terms of the broadened aperture of professional futures.”

Adams says it’s in those curriculum changes that the biggest impact can be made.

“We’re very happy that the chairman took time to visit UNM and introduce the NEH Next Generation Ph.D. to the campus community,” said Melissa Bokovoy, chair of UNM’s Department of History. “As was noted by both Chairman Adams and Provost Abdallah, many other Ph.D. granting disciplines are faced with a similar decline in tenure-track positions and even adjunct positions, not only humanities Ph.D.s. In our conversation with Chairman Adams, we discussed the fact that faculty will continue to train graduate students in disciplinary expertise and do that extremely well. However, it is incumbent upon our departments and faculty to prepare our students for a variety of different career trajectories, not only to be future faculty member.”

While in New Mexico, Adams also met with U.S. Senator Tom Udall at the IAIA Museum of Contemporary Native Arts in Santa Fe for a roundtable discussion on education, history and culture. During that event, Adams announced a renewed emphasis at the NEH on serving Native American communities in New Mexico and across the country.