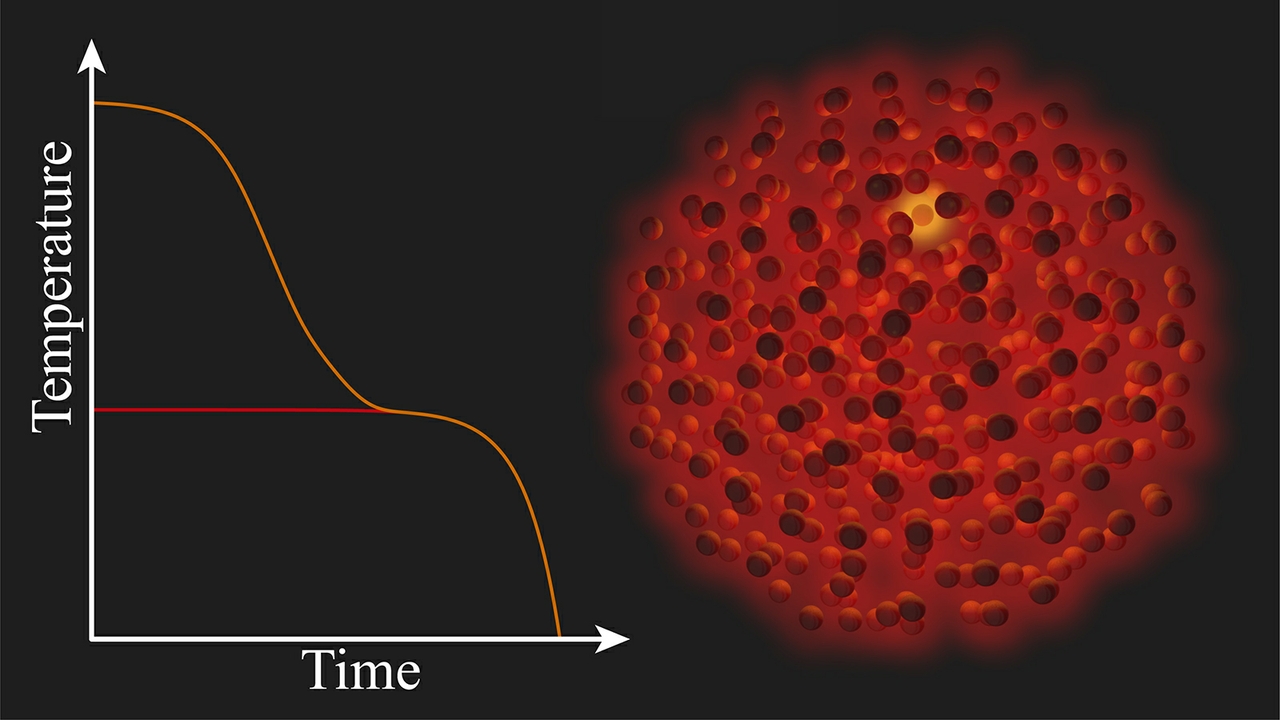 A team of researchers from UNM, LANL and Institute of Optics of Spain predict surprising behaviors in the thermalization of nanostructures
May 12, 2021
Categories: Front Page College of Arts & Sciences Physics & Astronomy Research

Everyone has sat outside on a sunny day and been warmed by the sun’s rays. This happens through a process known as radiative heat transfer: the sun emits light (electromagnetic radiation), which travels to the Earth and heats up the objects that absorb it. Radiative heat transfer is also the mechanism behind thermal cameras.

Every hot object, including human beings, emits light, allowing it to release heat and thermalize to the environment. The wavelengths, or colors of light that are emitted, depend on the temperature of the object, with the sun being hot enough to produce visible light and human bodies emitting light that is not visible to the eye but can be picked up by infrared sensors.

For macroscopic objects, radiative heat transfer is accurately described by the well-known Planck’s law of black-body radiation, commonly seen in undergraduate physics classes. When the size of an object approaches the nanoscale, however, Planck’s law no longer applies. At this scale, hundreds to thousands of times smaller than the thickness of a human hair, the radiative exchange of heat can be many times more efficient than at the macroscale.

Controlling nanoscale radiative heat transfer can enable the development of a wide range of applications. One example is thermophotovoltaics, a technology that seeks to convert wasted heat produced, for instance, by engines and factories into usable electricity. Another application involves cooling down the electronic components in microchips, whose sizes have already reached the nanoscale. Improved thermal management techniques for these devices can help to prevent computers from overheating and facilitate the development of chips with more transistors.

Inspired by this great promise, scientists from The University of New Mexico, Los Alamos National Laboratory (LANL), and the Institute of Optics in Spain have published a study that gives new insight into the way that collections of nanoparticles radiatively exchange heat with one another and their environment. Their work, titled “Near-Field Radiative Heat Transfer Eigenmodes” was published in the journal Physical Review Letters recently.

Prior to this work, scientists knew how to compute the thermalization dynamics of arrangements of nanoparticles, but the calculations require significant computational resources that become prohibitive even for systems with a dozen particles. In this study, led by Alejandro Manjavacas in collaboration with Diego Dalvit and Wilton Kort-Kamp from LANL, the researchers have developed a theoretical framework that enables the efficient and simple description of the thermalization dynamics of systems with even thousands of nanoparticles.

“Our method provides an elegant and efficient approach to solve problems that have been around for some time,” said Manjavacas.

The researchers’ theoretical framework breaks down the radiative heat transfer dynamics using simple mathematical techniques that one would encounter in an undergraduate linear algebra class. In doing so, they were not only able to study the thermalization of large and complicated systems, but also uncover physical insight that presents itself in unexpected ways.

For example, the team found that, when an arrangement of nanoparticles has some amount of heat initially stored in it, the system will approach the temperature of its environment in the same way, regardless of which particles are hot. In contrast, if the total heat initially in a system is zero, such as when one nanoparticle is hotter than the environment and another is colder, the system reaches thermal equilibrium more quickly than any temperature distribution with some initial heat. This is true even if the latter case requires a much smaller change in temperature than the former.

“I found this project very exciting because it involves the application of basic but elegant mathematical concepts to a state-of-the-art physics problem,” said lead author of the paper, Stephen Sanders, who will graduate soon from UNM with his Ph.D. in physics with plans to move to Rice University as a Rice Academy Fellow.

Another graduate student involved with the paper, Lauren Zundel, who is a Department of Energy Computational Science Graduate Fellow, says, “It was great to apply what I have learned about computational science to solve a problem like this.”

The research was sponsored in part by the National Science Foundation (NSF) and the Department of Energy Computational Science Graduate Fellowship (DOE CSGF) from the U.S., the Ministerio de Ciencia, Innovación y Universidades from Spain, and the Laboratory Directed Research and Development Program of Los Alamos National Laboratory.

** Image caption - Artistic rendering of the thermalization of an ensemble of nanoparticles mediated by radiative heat transfer.