It’s a simple idea that many say will revolutionize the way research is done at The University of New Mexico: Build a facility to house classrooms, offices and laboratory space for scientists from across campus, not just from a single department.

The Physics & Astronomy and Interdisciplinary Science (PAIS) center will be a state-of-the-art, 137,000 square foot facility, the purpose of which is to do just that. PAIS will not only change the face of the UNM campus and provide cutting edge facilities, it will also make a huge impact on the way students and faculty work to solve problems.

“This is going to be a transformative building for the University,” said Mark Peceny, dean of UNM’s College of Arts & Sciences. “It won’t just house the new offices for Physics & Astronomy, but it will also have a variety of interdisciplinary science centers that are at the forefront of their various fields and are doing path breaking research that will provide extraordinary opportunities for our students.”

Peceny, along with dozens of other UNM administrators, faculty members and students say this new center will create an environment that will foster collaboration between disciplines. There will no longer be astrophysicists working across campus from chemists and engineers; instead, many will work in PAIS next to one another, making partnership that much easier.

With the Department of Physics & Astronomy as the facility’s anchor, PAIS will also house centers for bioinformatics & genomics, geo-spatial data analysis, human & primate studies, stable isotopes, electron microscopy and many others. The idea is to give scientists a place they can interact and share concepts to spur more research to solve some of the world’s biggest problems.

“Part of our vision for this building was we can’t just say this is a building for one department. This is a building to bring people together to do transformative science,” said Peceny. “It will really help UNM take a huge step forward in continuing to be an elite research institution.”

"We owe it to our students to train them in cutting edge research and in the best facilities. The new building would have a huge impact on that." – Wolfgang Rudolph, chair, Department of Physics & Astronomy

The move toward a more interdisciplinary approach is something many of the top research universities across the country are doing. Studies have shown these spaces can help increase conversations among researchers that can lead to innovative ideas. Also, many funding agencies are putting an emphasis on interdisciplinary research by requiring it as part of the proposals from grant writers.

One of the most important benefits of the new facility, however, will be its impact on UNM’s student population. PAIS will give undergraduate and graduate students new classrooms and state-of-the-art laboratories to learn in. For many, the benefits to students are what make a project of this magnitude worthwhile.

“Research really is education. We create new knowledge and that educates ourselves, but we also involve our students and we train them to be researchers themselves,” said Associate Vice President for Research Patricia Henning. “We involve students in the research we do and that gets them training to be competitive for what are arguably some of the best jobs in the state – which are research jobs.” 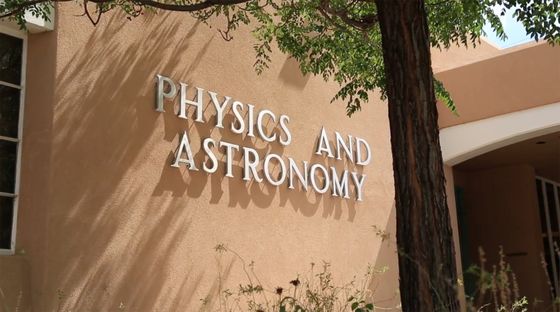 “We owe it to our students to train them in cutting edge research and in the best facilities,” said Wolfgang Rudolph, chair of the Department of Physics & Astronomy. “The new building would have a huge impact on that.”

Currently, the Physics & Astronomy department is housed on North Campus, in a building constructed in 1951. Over the years, the current facility has expanded and had minor renovations and improvements, but for the caliber of research being done there it no longer meets the basic needs of researchers and students.

“The problems are very diverse,” said Rudolph. “We simply do not have enough laboratory space to do the research we could do – and the space we do have is not of the quality that we need. Electromagnetic interference and mechanical noise in the form of vibrations are problems. The outdated plumbing causes leaks and interruptions of our operations.” 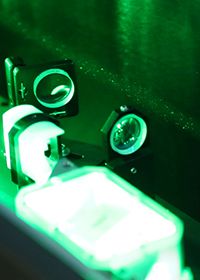 Researchers are constantly dealing with dusty conditions in their labs. The dust can cause significant damage to the equipment and lead to inaccurate experiments.

And those facility issues can cause big problems for research. For example, Dr. Mansoor Sheik-Bahae’s group is working to develop the world’s first, all-solid-state cryocooler, a device that uses laser light to cool materials down to cryogenic temperatures. Because of the age of his laboratories, researchers constantly deal with uneven electrical currents and excess dust in the air, making the conditions less than adequate for optical experiments. And, for a group that’s on the cutting edge, having state-of-the-art facilities would mean they can continue to progress and advance in a field that could have a big impact on the world.

According to Rudolph, the P&A Department brings in between four and seven million dollars a year through grants – money that is spent, in large part, in New Mexico on salaries and services. So, while the research being done across campus has a huge impact on science and the world, New Mexico remains a big beneficiary of the accomplishments made on campus every day.

When it’s completed, PAIS, which will be constructed at the site of a former City of Albuquerque water reservoir just north of Central Ave. between Yale Blvd. and Cornell Dr., will be the largest building on main campus and will truly change the face of UNM.

Right now, a portion of the money needed for the facility would come from bonds, with New Mexicans slated to vote on a General Obligation Bond C package this November. If Bond C is approved, the facility could be completed by 2019.

“With Bond C, the citizens of New Mexico would make a statement. It would mean they’re looking toward the future and want a state with a modern industry,” said Rudolph. “And the most important first step in that is to educate and train young people. And to do that, we need this new facility – we have to invest in science and engineering.”

Along with funding projects on UNM’s main and branch campuses, Bond C will also provide millions of dollars for higher education institutions across the state, all without raising taxes. Additionally, the investment by voters will have a big impact on the state’s economy and is projected to create more than 1,300 new jobs – a huge boon to families across the state and to researchers at the University. 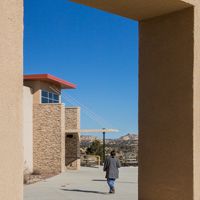 Among the decisions for voters this November is how to support higher education. Bond C is more than an opportunity for New Mexico’s students, it’s a way for local communities to benefit from more jobs and programs that support everyone from the elderly to first responders — all without raising taxes.

The University of New Mexico has Branch Campuses that cover a large portion of the state. These campuses serve as pillars of their local communities — they support the geographic needs of the residents that include education, employment and local engagement.

NMiF counts down top stories of 2019 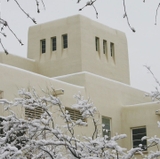