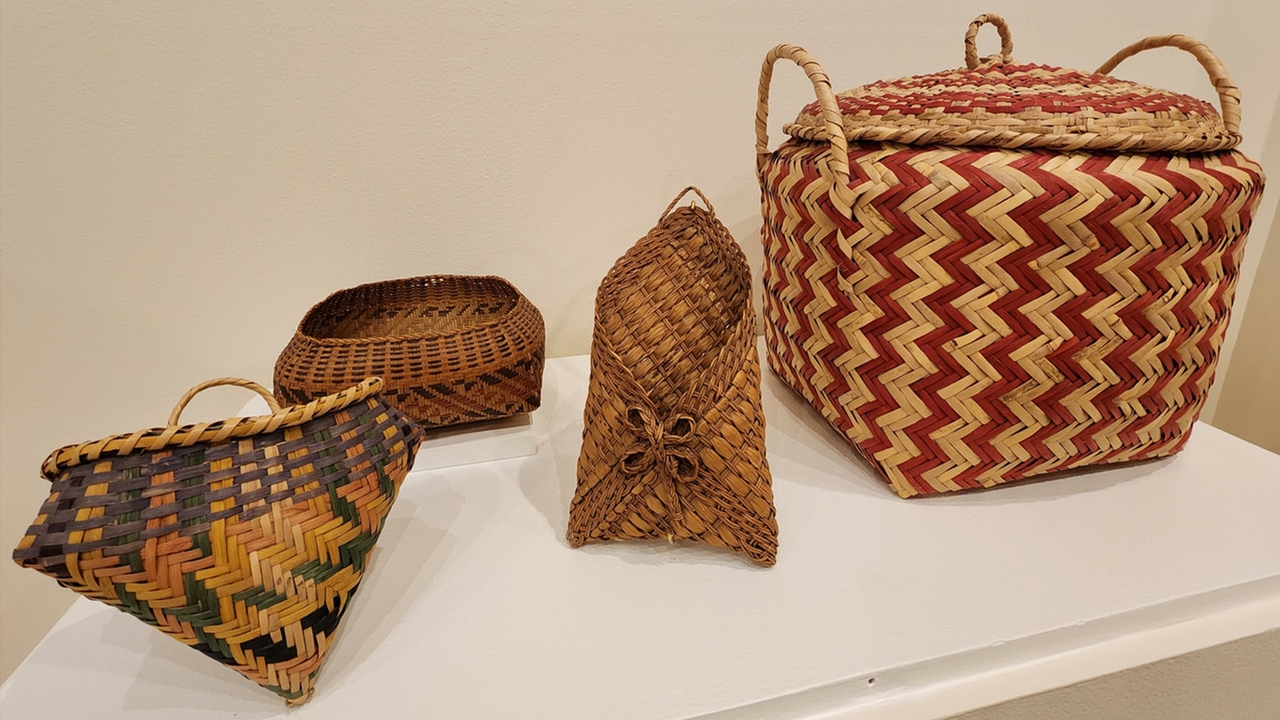 Two new exhibitions at the Maxwell Museum of Anthropology at The University of New Mexico will highlight Native North American baskets from the museum’s collection of more than 2,700 baskets from around the world.

Maxwell Museum of Anthropology exhibitions
Conversing with the Land: Native North American Baskets of the Maxwell Museum Collections
We Were Basket Makers Before We Were Pueblo People

Opening Friday, Nov. 11
Panel discussion, Room 105, Hibben Center for Archaeological Research, 6 to 7:15 p.m.
Reception follows in museum from 7:15 to 8:30 pm. Everyone is welcome to this free, public event. Light fare and refreshments will be served.

The panel discussion will be in Room 105 of the Hibben Center for Archaeological Research, located just south of the Museum, from 6 to 7:15 pm. The discussion will be followed by a reception in the museum, from 7:15 to 8:30 pm. Everyone is welcome to this free, public event. Light fare and refreshments will be served.

Transforming and countering incorrect colonial narratives, the panel conversation will discuss the importance of Indigenous knowledge systems within both community and museum contexts. The panel discussion is sponsored by the UNM Vice President for Research, Research and Discovery Week and the exhibits are in part funded by the Ortiz Center for Intercultural Studies.

“The largest Maxwell collections-based exhibition we have done in years focuses on a significant but overlooked collection of Native North American baskets,” Romanek said. “We wanted to bring this remarkable collection to the public’s attention and to reflect on important current issues. Among these are the broad issues of Indigenous sovereignty and relationships to the land, especially in light of global issues like climate change.”

Mostly made of organic (primarily vegetal/plant) materials, the baskets allow us to consider all of these issues, as well as others such as the effects of colonization over centuries, Romanek pointed out.

“Our visitors can experience the exemplary creativity, skill, and ingenuity of the various Native American basket weavers represented in the exhibition, which is all the more powerful in the face of the often challenging and dark histories that many of these baskets also encompass,” she added.

The Maxwell houses over 2,700 baskets from around the world, according to Lauren Fuka, senior collection manager, Ethnology. Most ̶ about 2,300 ̶ are from North America. This exhibit has about 170 items on display, all of them from North America.

In the overall collection, more than 800 are from the Pacific Northwest and more than 500 are from the U.S. Southwest. The rest are from California, Arctic and Sub-Arctic, Great Basin, Great Lakes, Northeast, Southeast, Plains, or are without provenance.

While the exhibit includes baskets from all regions of the continental U.S., Alaska, and Canada, in the exhibit the Maxwell recognizes and honors the indigenous lands and peoples as the original sources of the items. 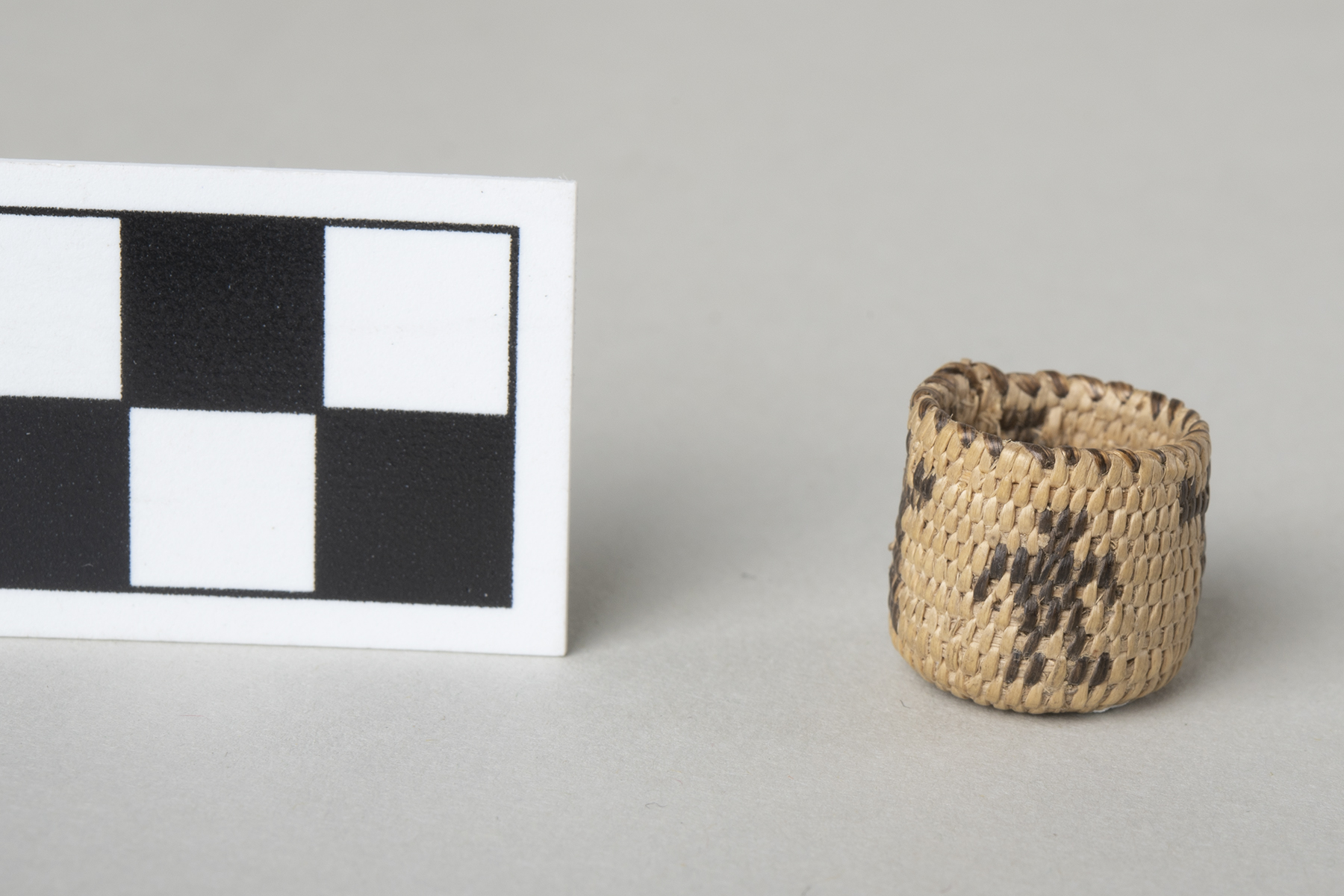 Smallest basket is .6 inch in diameter

“Miniature baskets are especially difficult to make, requiring incredible manual dexterity. This one seems to delight and impress everyone who sees it,” Romanek said.

“It might be surprising to think of a canoe as a basket,” Romanek acknowledged. “But if a basket can be understood as a container for holding and carrying things, then the 6.4 meter, 21 foot long canoe, made on a frame of cedar wrapped in the bark of the paper birch to hold and carry people, meets that definition.”

The canoe was made for trade or sale, shortly after the Klondike gold rush had brought about major environmental devastation in the region. It was not ever used in the water because there is no evidence that sealant was even applied to its seams. It came to the Maxwell in 1982 as part of a large collection of baskets donated by Sella Hatfield that she inherited from her father who acquired them from the Alaska Fur Company of Seattle, Washington.

Like the miniatures, this “basket” shows incredible skill and also sophisticated engineering knowledge.

“The themes we want to convey are the range of artistic talent and depth of knowledge represented, the stories they tell and how we’ve tried, through working with our co-curators, to bring them to the fore, placing the baskets in cultural and historical context as far as possible,” McChesney said. “The additional insights we gained from our six Native co-curators for the main exhibit, four co-curators for the Pueblo basket exhibit, and the knowledge of our principal overall consultant, basket specialist Bruce Bernstein, with assistance from independent curator Lillia McEnaney.”

“We highlight the important issues of sovereignty, climate change, social and environmental justice, and decolonizing museum practices ̶ here, in the terms of the Maxwell Museum’s newly adopted vision of reconciling injustices, restoring voices, and realizing community,” she added.