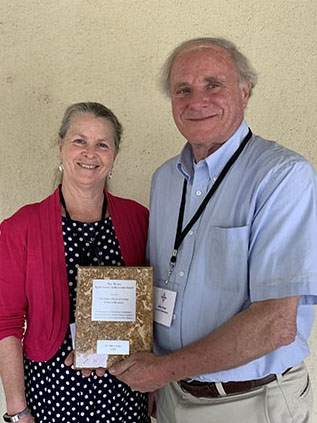 In the 45 years since he began working as geology professor at UNM, Kues has contributed greatly to the science of geology in New Mexico through research, teaching, leadership and service. A paleontologist and stratigrapher, Barry has focused his research almost exclusively on New Mexico geological problems. Many of his papers have been published in New Mexico-based journals, and focus largely on creatures that lived in or near shallow seas that covered New Mexico between 145 and 65 million years ago.

He has published technical papers on Cretaceous sauropods, mosasaurs, gastropods, crabs, bivalves, and nautiloids, among other things, and is also the author of the UNM Press book “The Paleontology of New Mexico”, which provides a detailed examination of the flora and fauna of New Mexico over the past 500 million years.

His most recent book, “A Brief History of Geological Studies in New Mexico with Biographical Profiles of Notable New Mexico Geologists,”  contains 42 sketches of the lives of men and women who influenced our understanding of the geology of the state, as well as a detailed narrative of the evolution of geoscience in New Mexico. Kues has authored, edited, or co-edited 14 other books, including 11 NMGS Fall Field Conference guidebooks.

In addition to being an engaged researcher, Kues has influenced the field of geoscience education at all levels. He educated and inspired hundreds of students through the teaching a wide range of courses, and the advising graduate students during his time as a professor (1974-2011) and as an emeritus professor since 2011.

He has also raised public awareness in New Mexico through his interactions with museums and public schools, and through his writings in newspapers.  On field trips, he is the person sought out to identify any “mystery fossils” that have been discovered. Kues has always patiently and cheerfully identifies them, and explains about the world they lived in.