New Mexico PBS honors Veterans with related programming throughout May

In honor of Memorial Day and the service of United States Veterans, New Mexico PBS will air Veterans-related and Memorial Day weekend programming throughout the month of May for those who serve/served, their families, friends and communities. The programming begins on Sunday, May 9 at 10 p.m. with Ernie Pyle: Life in the Trenches. 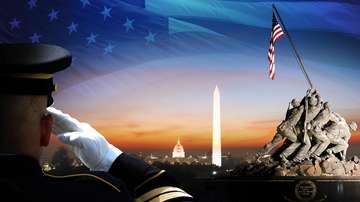 This program tells the story of the Pulitzer Prize-winning columnist who reached millions each week with stories celebrating "ordinary" Americans doing extraordinary things. The colloquial charm and folksy style of Pyle's writings spoke to his readers as he captured snapshots of American life during the 1930s.

Explore the remarkable story of the pioneering military career of Charlotte Dee Mansfield, a photographer and photo analyst in the Women's Army Corps. The film draws from her personal writings, archival film resources, historian interviews, and a conversation with Charlotte's lifelong companion, Chief Master Sgt. Lorraine Caddy, to add context to Charlotte's career and the legacy of women's military service during WWII. The program not only provides a look at how women navigated new roles in the military, but also offers an opportunity to expand the popular conversation around women's contributions during the war.

Discover the measures Chancellor Hitler takes to dismantle the German state. The Nazis had the power to ban free speech, books are burned, and Jewish people, gay people and those holding anti-Nazi beliefs began to disappear.

April, 1945. Hitler is in the center of Berlin, 10 meters underground, surrounded by 4-meter thick concrete walls, safe from any air attack the Allies can throw at him. But the Russians are advancing on the ground: the Red Army is lined up along the Oder River and going for the Fuhrer. Blocking the way are rings of ingenious defenses, kill zones and strong-points that have turned Berlin into a fortress. At the heart of this fortress is the Fuhrerbunker.

See how Hitler finds himself caught between Germany's president and the Nazis' power base. His advisors persuade him to destroy the Nazi stormtroopers and their leader -- one of his oldest friends -- to make the SS Germany's only paramilitary force.

Learn why Imperial Japan built a network of defensive lines, bunkers and fortifications across the island of Okinawa-turning it into a deadly killing machine-and consider its grisly legacy.

80 years after the world’s largest airship ignited in a giant fireball, newly discovered, never-before-seen amateur footage of the crash has surfaced,

showing the airship’s final seconds from a fresh angle. Taking clues from the footage, NOVA leads a fresh reinvestigation, with experiments that point to a final solution of the mystery.

This program investigates a Civil War soldier's letter, fabric from an aircraft that could be linked to Charles Lindbergh and Igor Sikorsky.

Discover more about the world we live in by shedding new light on a geopolitical hot spot. Often considered a "forgotten war," the Korean War was an important turning point in world history that still reverberates today.

Learn how the longest reigning monarch in British history was shaped by World War II. Princess Elizabeth's experiences during the war mirrored those of the public and helped shape her into the Queen she is today.

Learn how Japan, in a bid to dominate the Pacific, builds the biggest battleship in the world. A floating fortress with the most powerful guns and the thickest armor ever mounted on a warship, the Japanese believed her unsinkable.

This program investigates a propeller from a World War II drone, a wooden club that could be Teddy Roosevelt's and a letter that Clara Barton could have written concerning a soldier's life.

NOVA looks at the array of promising new electric planes on the horizon and takes you for a ride in some impressive prototypes that are already in the air. Major companies are currently racing to develop practical short-haul passenger planes that promise to slash the operating costs and emissions of regular flights. How long will it be before the dream of super-quiet, super-efficient airliners becomes a reality?

Tune in to the 32nd annual broadcast of America's national night of remembrance, honoring the military service of all our men and women in uniform, their families, and those who have made the ultimate sacrifice for our country, with special tributes to Vietnam Nurses, the 70th Anniversary of the Korean War, the  20th Anniversary of 9/11 and Gold Star Families.

Programs are available for streaming following the broadcast on the PBS Video App.