UNM Parking and Transportation Services (PATS) has announced the launch of a new nighttime shuttle service route. The Night Bus will start making its rounds on the first day of classes this Monday, Aug. 22.

The new Night Bus route was created after students expressed a need to have bus service from the South Lot with a connection to North Campus as well as more consistent shuttle service at both locations.

“I am really excited to offer this new bus service route,” said UNM Transportation Manager Raul Martinez. “The more reliable our bus service is, the more people will use it.”

The new route will also improve PATS’ efficiency—reducing the number of shuttles needed after 7 p.m. from eight to only six shuttles.

Before the new bus route, commuters heading from Research & Student Support Services, South Lot, or Lobo Village after 7 p.m. would have to walk across Main Campus to catch the G/Q shuttle to North Campus as Redondo shuttle service stops after 7 p.m.

Conversely, commuters from North Campus needed to walk some distance to the Yale shuttle stop for access to South Campus. Also, there was no shuttle service to the east or west part of Main Campus after 7 p.m.

Shuttle service will be available at major stops: Q Lot, Duck Pond North, Duck Pond South, Yale, Campus, and South Lot every 10 minutes from 7 p.m. to 10 p.m., Monday through Thursday. Service at “in-between stops” of the previously mentioned major stops will not be timed. PATS encourages commutators to tell the bus driver their destination to avoid confusion.

The new Night Bus route has been added to the Where’s My Bus App, the University’s shuttle tracking app. For more information about the Night Bus route including maps, service hours, and shuttle stops, visit the PATS website. 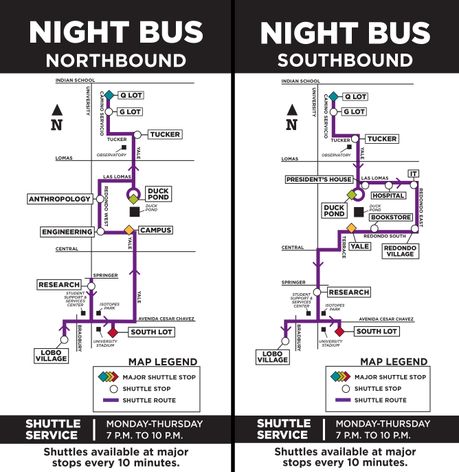