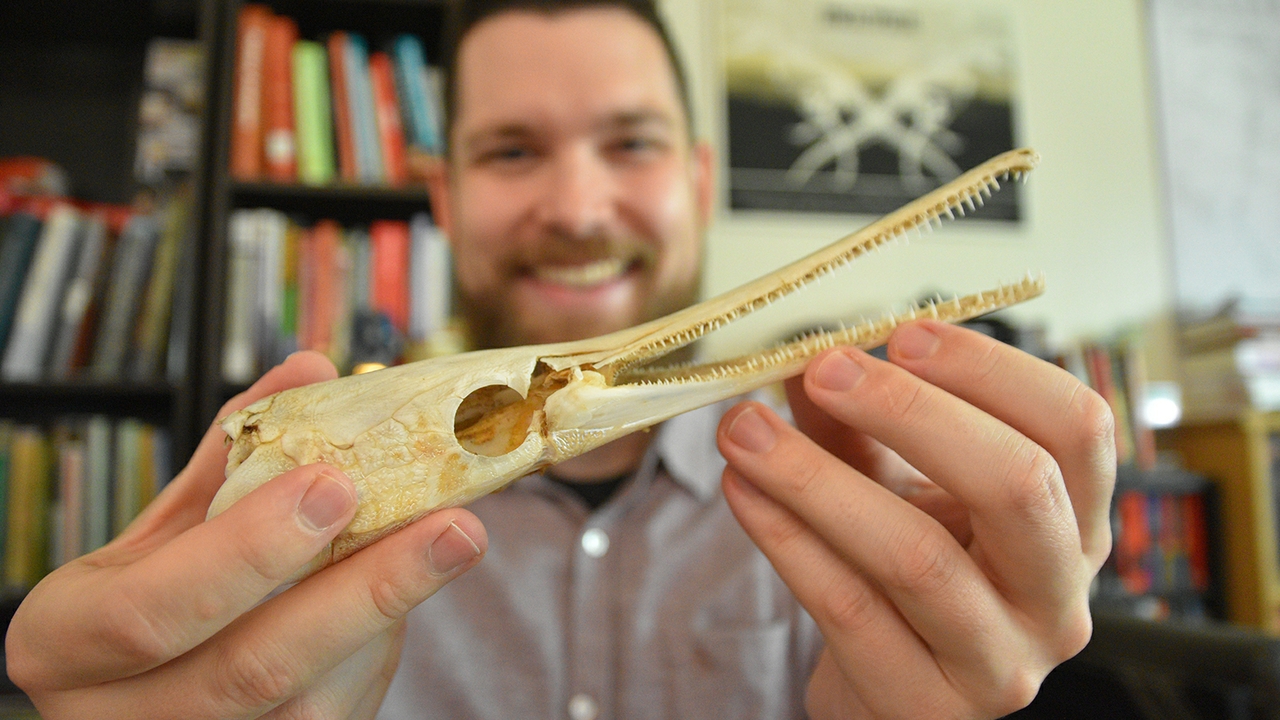 Many people believe that Ancestral Pueblo diets were almost solely dominated by run-of-the-mill foods like maize and rabbits. But archaeologists are turning that stereotype around.

In early archaeological sites in the Middle Rio Grande basin of central New Mexico, finding remains of fishes that people had used for food is rare. But in later pre-Hispanic and early historic sites, archaeologists see an uptick in the use of fishes. In his latest published research, Jonathan Dombrosky, a Ph.D. candidate in the Department of Anthropology at The University of New Mexico, examined how a change in climate may have changed the diets of Ancestral Pueblo people.

The recently published paper Resource risk and stability in the zooarchaeological record: the case of Pueblo fishing in the Middle Rio Grande, New Mexico in Archaeological and Anthropological Sciences is the first article to come out for Dombrosky’s dissertation and is related to a $30,298 National Science Foundation grant he received to further research the impact of a changing environment on the incorporation of new foods into human diets.

Dombrosky thinks that as the climate changed and conditions became wetter, it became easier for Ancestral Pueblo people to rely on fish as a food source.

“In the article, we try to answer why different human groups in the past might incorporate a small amount of different wild animals into their diet. Normally, archaeologists assume that people select food based on how much of it there is or how large it is. The idea here is that having a lot of large game in the diet is an ‘optimal’ diet. However, here we argue that optimality is a far more complicated concept and that there are certain conditions when a small amount of a small-bodied animals could be optimal to include in the diet,” Dombrosky said.

There aren’t very many fish bones recovered from archaeological sites around Albuquerque, but they are recovered reliably in small quantities across sites. So the question, he said, is what could be driving this interesting pattern. This new article argues that ecological stability played a role.

“The start of the late pre-Hispanic period here around Albuquerque is also the end of severe drought conditions across the Southwest, a climatic anomaly known as the Medieval Warm Period. It seems that wetter river conditions provided more diverse food resources for fishes themselves to rely on, which translated to a healthier community of fishes in the past. In the paper, we argue that people would have known that fishes could have been more reliably caught during this time, making fishing a more viable way to get food,” he summarized.

In terms of animals to eat, hunting something like deer would be the most “optimal” choice according to most archaeologists. The main animals used for food are deer, rabbits, and turkeys.

“They get all the glory and attention from zooarchaeologists like me. But fish definitely fit into the diet. It’s almost like they could have jumped onto the Ancestral Pueblo menu precisely because these wetter stream conditions enhanced the quality of the resource. And the enhanced quality is that they can replenish and withstand disturbance better during wetter environmental conditions. They are less risky to pursue. I wouldn’t necessarily paint it as an either/or scenario between, say, getting deer or fish. People would try to get deer whenever possible but they can also get a little bit of fish and rely on it. Multiple different logics on how to obtain food can coexist simultaneously in a given culture.”

“I’ve made this analogy to my friends and family: If you’re not so hungry, but need to eat something, where are you going to go to get something to eat? Will you go to a brand new restaurant that has mixed reviews on Yelp, a high risk option? Or would you just go to McDonald’s and get four chicken McNuggets, a low risk option? Most likely you’d choose the McNuggets  ̶  or pick whatever reliable fast food item you enjoy. This is how I think fishing fit into the lifeways and food options of Ancestral Pueblo people in the past. I certainly do not think it is the only way, but just one underexplored way,” he observed.

“This research adds to a growing suspicion in Southwest archaeological scholarship that the eating habits and culinary practices of Ancestral Pueblo people are far more diverse than we’ve been led to believe,” Dombrosky concluded. “The received wisdom is that maize is the most important food item among Ancestral Pueblo people. And then—if you want to consider animals—deer, rabbits, and turkey were just a little bit important.  While these food items are absolutely pivotal, there is more to Ancestral Pueblo life left to discover. If we can step outside the colossal shadow of maize just for a second, we could find out a lot more about how people used food like fish to survive and thrive in this landscape. We could learn more about how Ancestral Pueblo people maintained their culture by making different decisions about what to eat and when to eat it.”