Individuals can live with a new hair color or simply wash it out
By Karen Wentworth July 24, 2014
Categories: Latest News Mechanical Engineering

What if you could alter your hair to reflect any color in the spectrum?  What if you could use a flatiron to press a pattern into your new hair color?  Those are possibilities suggested by researchers from the University of New Mexico and Los Alamos National Laboratories.

Engineers aren’t typically known for their interest in cosmetic applications involving their work. However, in a new paper titled "Nano-Patterning of Diffraction Gratings on Human Hair for Cosmetic Purposes" and published recently in the Journal of Cosmetics, Dermatological Sciences and Applications, researchers at the University of New Mexico and Los Alamos National Labs demonstrate the potential usage. 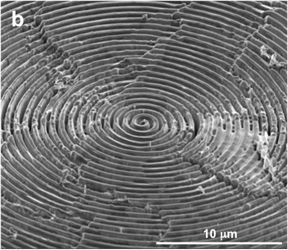 Overview of milled spiral pattern on a strand of brown hair 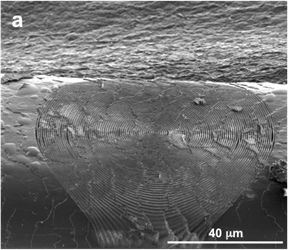 Their research explores a way to etch diffraction gratings on individual hairs to reflect light in a specific way.

The project began in late 2009 when Lamartine, based on work from his previous patents, disclosed a LANL invention for non-chemical directional coloring of hair using milled or impressed nanopatterns.

Using Lamartine’s ion beam control programs, Leseman and his graduate students Khawar Abbas and Drew Goettler began experimenting with fine etching of the diffraction gratings which allowed them to create patterns that reflected specific bandwidths of light depending on how far apart the lines were, and how wide and deep they were.

By 2011, P&G had funded the project, and the company wanted to see the results of FIB nanopatterning on distinct types of hair. One sample was Asian/Black hair, another was European brown hair, while a third sample was blond.

The patterning technique proved to be most effective on brown hair, and also produced results on blond and black hair, but etching hair strands on a million dollar machine isn’t practical for anyone. Leseman and Lamartine submitted their report, and the project ended there.

But the two researchers kept thinking about the possibilities. They speculate if someone wanted a permanent change in hair color, they might be able to use something like a flatiron to etch the diffraction gratings into the hair.  The color would depend on the portion of the light spectrum that was reflected.  Change paddles on the flatiron and change the color, or do special theatrical patterns in the hair, such as changing the diffracted color that the audience sees as an actress walks under a spotlight.

"That’s one way to do it, to make the pattern directly onto your hair, your permanent hair and that would be more of a permanent change until it grows out," Leseman said. "The other idea was and still is to actually develop some kind of conditioner. Some kind of polymer coating for your hair, and then when you actually to the patterning with your flatiron that’s specially developed for this polymer coating, maybe low heat or something like that. Then you could actually pattern the conditioner or the polymer on your hair first. And then it would easily wash out if you wanted it to go away, so that’s not as permanent and as scary."

If you think hair decoration seems too frivolous, there are many other potential uses for this technology. It might be used as an information security feature on credit card readers or it could be used to identify friend from foe in confusing situations. Lamartine says there are interesting ways this could be done.

"We talked about the possibility of a band pass, an optical band pass filter and this would lead to identifying a friendly soldier if you can wear a pattern like this, possibly on an armor jacket," said Lamartine. "The identification could change like the old style military code books. You could issue a new roll of tape with a different pattern on it once a month and you know that there’s a certain color of laser which will return from that. If it is somebody else’s pattern, then you know you don’t have a friendly."

The researchers say it could be used to defend against potential terror attacks on civilian airplanes. Print specific diffraction gratings on a roll of polymer, attach it to the underside of a jetliner and the jet becomes invisible to the laser sights on missiles. The jetliner would essentially become a ghost plane to terrorists. They like these potential uses because it might save lives.

The technology also lends itself to a variety of other applications. It might be pressed into tiny patterns on piston heads where a fuel injector could shoot drops of fuel so the pattern on the piston head could split them into even smaller drops. It might allow a fuel efficient gas injection engine to use the fuel even more efficiently. Or it might be used as a mechanism to filter viruses or bacteria from blood or other body fluids.

Lamartine and Leseman are now looking for entrepreneurs or investors who see the potential in the technology. There’s still much to be done before they have an actual consumer product in hand for hair  airplanes or anything else, but Leseman and Lamartine think the possibilities are promising.

UNM faculty building an economy one great idea at a time