This week on New Mexico in Focus, Gov. Michelle Lujan Grisham sits down for her first one-on-one, in-depth interview since the start of the legislative session. The governor talks about her legislative strategy, criticism of her approach and the controversial gun safety measures she's endorsed and lobbied to get to her desk.

On March's installment of Our Land, environmental correspondent Laura Paskus travels to Socorro and a Superfund cleanup site where a plume of toxic groundwater from an old battery plant is seeping underneath homes. The Eagle Picher site has been a federally designated cleanup project since 2007, and the state has been aware of the problem since the 1980s. Paskus asks state officials about the holdup on one of the state's 16 designated Superfund sites.

Gene Grant and the Line opinion panelists discuss the Senate-approved bill to create a new Early Childhood Education and Care Department and examine a Senate-approved resolution that would reshape the Public Regulation Commission by turning it into a three-member body appointed by the governor after vetting by an independent nominating committee.  The Line panelists also look at a recent study that finds the rate of prisoners held in solitary confinement is more than double the 4 percent that state officials claim.

NMiF talks about the pandemic and live theater 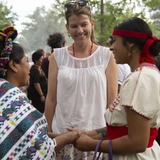