NSF projects to take a holistic look at water quality

A researcher in The University of New Mexico School of Engineering has received $1.4 million from the National Science Foundation in two separate grants to study issues of water quality using holistic approaches that have never been attempted before.

Ricardo Gonzalez-Pinzon, an assistant professor in the Department of Civil Engineering, said the two projects, though separate, both will examine issues surrounding three key elements in water: carbon, nitrogen and phosphorus.

“These are elements that are essential for life,” he said. “All living organisms depend on them, so it’s important to look at how their availability in water from different sources and at different locations control water quality along river networks.” 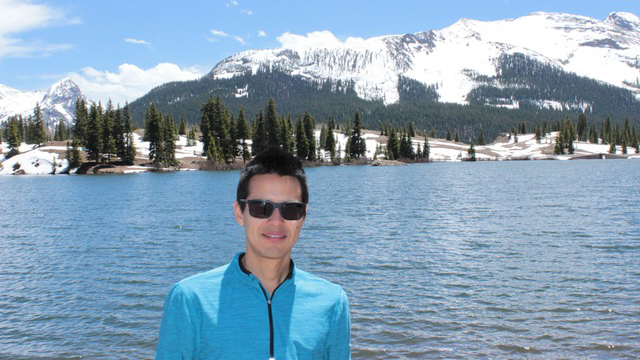 Assistant Professor of Civil Engineering Ricardo Gonzalez-Pinzon, shown here by a river in Colorado, is undertaking two large studies on water quality that will examine several bodies of water in different states.

The first project, titled “How do interactions of transport and stoichiometry maximize stream nutrient retention?,” is a collaboration with the University of Colorado, Colorado School of Mines and Colorado State University. The three-year project, which began July 15, will seek to understand how the availability of carbon, nitrogen and phosphorus in four different stream compartments (i.e., main channel, and surface, shallow and deep transient storage zones) controls microbial metabolism and the cycling and export of such nutrients. The team will look at water sources in three different sites: Boulder Creek, in a Rocky Mountain setting in Colorado; Catalina-Jemez, a low-nutrient and meandering stream in New Mexico, and a high-nutrient agricultural stream in Iowa.

Gonzalez-Pinzon says that there have been many previous studies that have looked at one (mainly nitrogen) or two of the three nutrients in a specific stream compartment (mostly in the main channel), but there are not field studies where the simultaneous cycling of these three macronutrients have been studied in stream compartments known to control water quality in river networks.

“Despite that we know that carbon, nitrogen and phosphorous are elemental nutrients that are essential for life, we do not understand how their spatial and temporal variability (due to geological, hydrological and anthropogenic factors) affect the abundance of aquatic microbial communities and the rates at which these microorganisms (the main players) take up nutrients, which ultimately controls nutrient export and downstream water quality,” he said. “Everything affects everything else. Nutrients in rivers affect and are affected by microorganisms, which are eaten by aquatic insects, which are eaten by fish in the stream, which humans then eat, so there’s a huge food chain implication. Also, nutrients in waters also affect water supply to crops, animals and humans.”

The researchers expect to find differences in nutrient cycling patterns in the three streams they will study because such streams have very different topographies, geologic templates and levels of human intervention.

“We can compare steep vs. flat streams, pristine vs. altered streams, and confined vs. highly-meandering streams, which will help us contrast our results and identify overall patterns,” Gonzalez-Pinzon said.

He said this is a huge project that will utilize skillsets from researchers in different areas, such as environmental science, earth science, and water resources engineering. The team will spend one year at each study site and the graduate students involved in the project will take classes during extended research visits at the other universities where the principal investigators work. At the conclusion of the study, the team will organize a workshop to promote and stimulate interaction and exchange of ideas and knowledge among the principal players in the stream restoration field, particularly young scientists and practitioners, stream restoration companies, and local environmental agencies.

The second project, titled “Nutrient Dynamics Along a River Continuum: Combining Sensor Data, Experiments, and Time Series Analyses to Identify Local to Watershed Scale Drivers of Nutrient Cycling,” which began Aug. 15, will also look at carbon, nitrogen, and phosphorous, but this time examining nutrient cycling along an entire river corridor formed along the Jemez River and the Rio Grande. Particularly, this project seeks to enhance data collection in traditionally understudied bodies of water like large rivers.

“Obtaining accurate data on the levels of elements in larger rivers and bodies of water is difficult due to logistical constraints such as access, unpredictable water, and sediment fluxes and data interpretation, Gonzalez-Pinzon said.

Also involved in the study is David Van Horn, a research assistant professor in the UNM Department of Biology, who has ample experience in river instrumentation, long-term data collection, and analysis and aquatic ecology.

Gonzalez-Pinzon said that previous studies have measured levels of one or two nutrients (mainly nitrogen), but primarily in small headwater streams, which aren’t nearby to large population centers. Examining nutrient dynamics in larger rivers will provide data that can be compared to previous data on headwater streams to see how we can better understand nutrient cycling at the watershed scale, and also how food and energy resources are impacted by and impact water resources.

“Most cities are adjacent to large rivers, and we don’t have data on how they work” he said.

This project will make use of novel sensing equipment that can examine nutrient levels almost continuously. The broader impacts of this study will be communicated in a workshop to train academics and professionals on long-term data collection and interpretation.

“Our hope is that both projects will improve understanding of nutrient cycling in rivers. These projects will provide actionable science to improve stream restoration and nutrient mitigation,” he said.