One of the nation’s foremost figures in the field of history, diplomatic affairs and Civil Rights will be visiting The University of New Mexico as this year’s keynote speaker at the 32nd Annual Black History Month Kick-off Brunch on Jan. 28 at 11 a.m. in the Student Union Ballroom, A, B and C.

"As one of the most preeminent public intellectuals of our time, Carol Anderson compels us to re-visit and place, Ferguson, Missouri, and the Black Lives Matter Movement in the broader context of the twenty-first century civil rights movement,” said Robert Jefferson, director of Africana Studies. 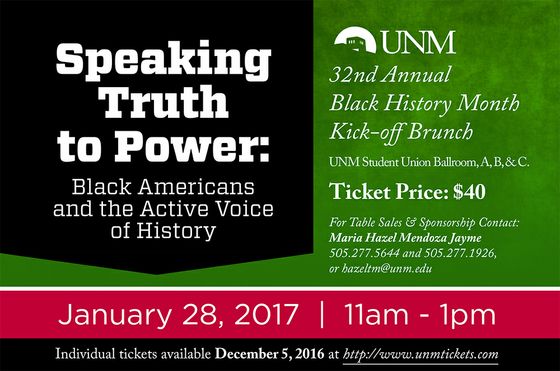 Anderson has published several, critically acclaimed books, including Eyes off the Prize: The United Nations and the African American Struggle for Human Rights, 1945-1960 which was awarded the Gustavus Myers and Myrna Bernath Book Awards. Her most recent book, White Rage: The Unspoken Truth of Our Racial Divide was published in 2016 and was on the New York Times Bestseller list and featured on the NY Times article, ‘100 Notable Books of 2016.’

Last year, Anderson was also recognized by Politico Magazine as one of the fifty “thinkers, doers and visionaries transforming American politics in 2016.”

As a researcher, Anderson has also garnered fellowships from the American Council of Learned Societies, the Ford Foundation, Harvard University and many more. She has also held leadership positions at Amnesty International, U.S.A., the American Civil Liberties Union and the U.S. State Department’s Historical Advisory Committee.