Open access allows scholars to find information on nearly anything

It’s easy for students to take the amazing information resources available through the College of University Libraries and Learning Sciences for granted. Like blue skies and fresh air, they just seem like something that’s always been there. But a panel discussion, hosted recently by University Libraries as a part of Open Access Week, was an important reminder of the continuing battle to make sure public information is free and or as cheap as possible.

When the U.S. government funds research through the National Institutes of Health or the National Science Foundation, the researchers usually publish the results of their work in professional journals. But subscriptions to professional journals are costly. Academic libraries buy the journal subscriptions and offer students free access, although they can't afford to subscribe to all the journals. Celebrating Open Access Week was an opportunity to talk publicly about what it takes to see that the public actually has access. 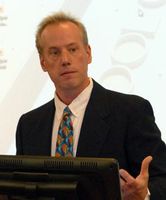 “You can make the argument that the public pays for information to be produced and we need it to conduct our business and make informed decisions about how we expect our government to proceed and so transparency is important,” said Jon Wheeler, University Libraries data curation librarian.

UNM data resources
UNM is a federal depository library, which means federal government documents are stored and maintained at University Libraries for easy public access. Students and community members who use it can find an amazing amount of information. UNM’s Government Information Data Librarian, Daniel Barkley says major government research funding requires researchers to have a data access plan. The problem is the government publishes so much information it’s sometimes difficult to find exactly what you are looking for. 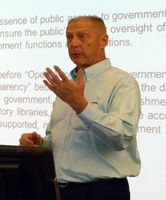 Barkley offers some suggestions about where to begin a search for government information.

A great deal of data government publishes is free, but sometimes there is a cost. The New Mexico Compilation Commission is an example how that works.

The fight to open state government
Sometimes the battle for open access centers on the process of getting government agencies to share the information they use to make public policy decisions.

Former state senator Dede Feldman laid the problem. “I’ve got to tell you there’s a lot of resistance to this," Feldman said. "You wouldn’t think that this would be so controversial.  It seems like a no brainer. Public documents that are paid for by the public should be accessible to the public. But my experience in the legislature is that there is a great deal of resistance from elected officials and from bureaucrats to opening up meetings, to opening up the filing cabinet.”

In New Mexico one of the biggest historic battles has been to open legislative conference committees. “The argument from the senators was, if you open up meetings to the public, which means the press, the participants will posture for the public, for their constituents, for political advantage. And it will make compromise more difficult," Feldman said.

Those conference committees were eventually opened, nearly 30 years after the first open meetings act passed in New Mexico. The last major battle for open access in the state came in 2010 when the New Mexico Legislature passed a law requiring state agencies and entities that receive public money to maintain a sunshine portal listing information about contract, procurements and employee salaries. You can find New Mexico’s sunshine portal here.

Panelist Benito Aragon is the co-founder and publisher of the online publication New Mexico Mercury is very active in trying to get government agencies to release public information. He said his organization continues to try to understand how the administrative officials working under New Mexico Governor Susana Martinez made controversial decisions to turn mental health treatment in the state to a group of health care providers from Arizona. He also singles out the Albuquerque Police Department for inconsistently releasing records and video of incidents involving police interactions with the public.

Advocates of open access say the only way the public knows what is happening in research or in government agencies is if they have some way to easily find the information prroduced or compiled with public funds. Feldman sums up the effort in this way. “Special interests flourish in darkness. Public interest flourishes in the sunshine.  And that’s why the slogan for open government is “Sunshine is the best disinfectant.”