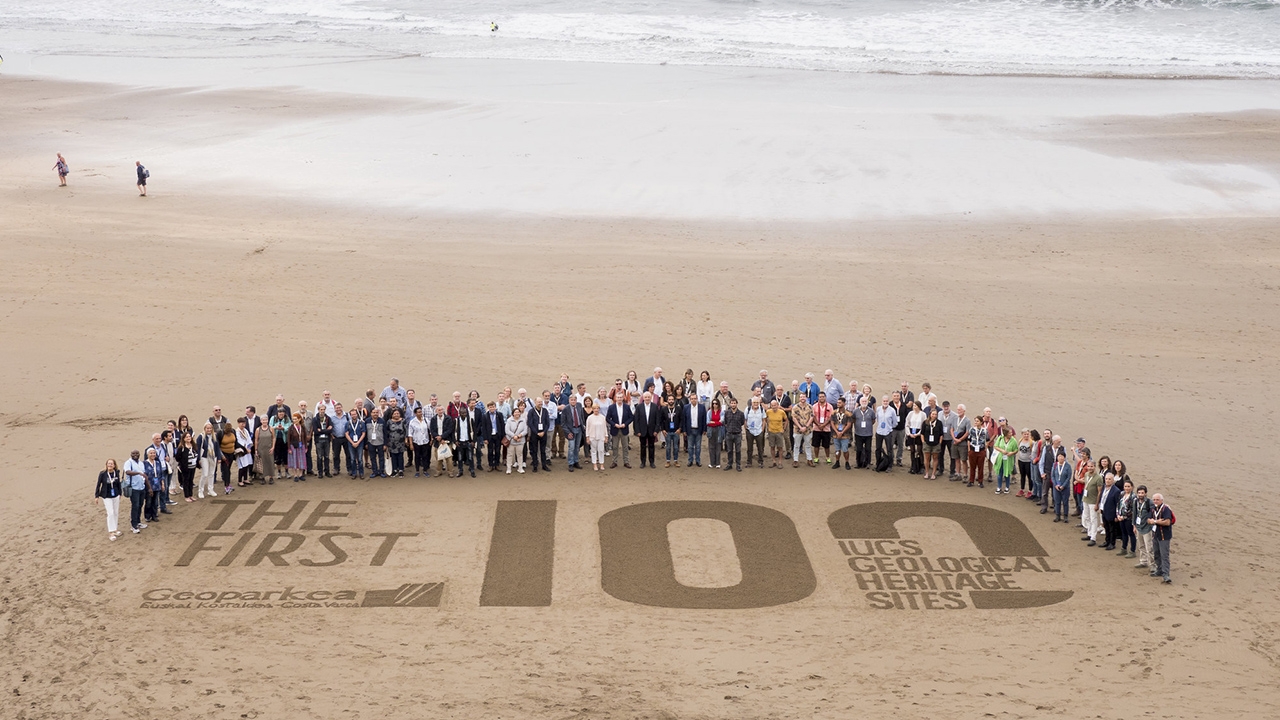 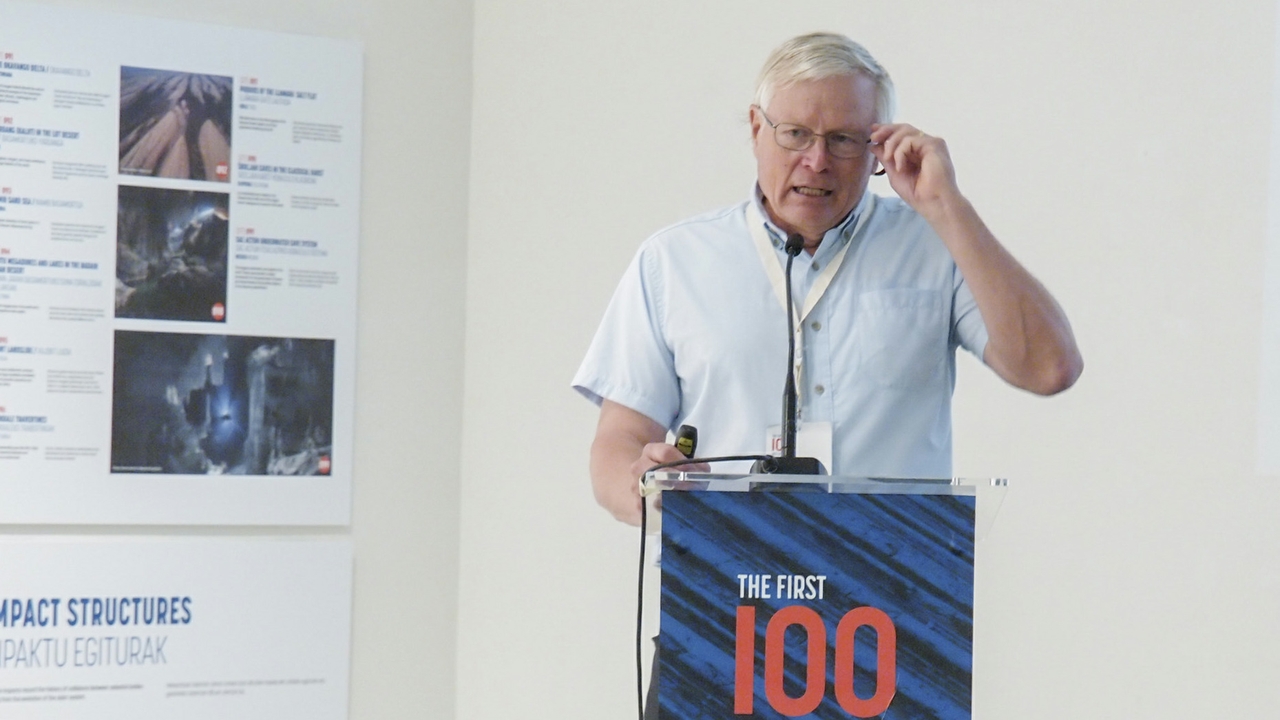 Our Common Geoheritage: The First 100 International Geoheritage Sites from the Basque Coast to Grand Canyon

The village of Zumaia, on the Basque Coast (north coast) of Spain, hosted a meeting recently (October 26-28, 2022) of the International Union of Geological Sciences (IUGS), the 60th anniversary of the IUGS, with representatives from over 40 counties. The purpose was to dedicate the FIRST 100 International Geological Heritage Sites.

University of New Mexico Distinguished Professors Karl Karlstrom and Laura Crossey, in the Department of Earth and Planetary Sciences and long-time Grand Canyon researchers, were among the attendees. They developed the “Trail of Time Exhibition” in 2010 at the South Rim to foster geoscience education and were the proposers and presenters of two successful IUGS Geoheritage sites including the nominations for the Grand Canyon at the Zumaia meeting.

“The mood was exuberantly serious in a commitment to link geo and human heritage together, a partnership that becomes ever more urgent as human populations grow exponentially on a small planet,” said Karlstrom. 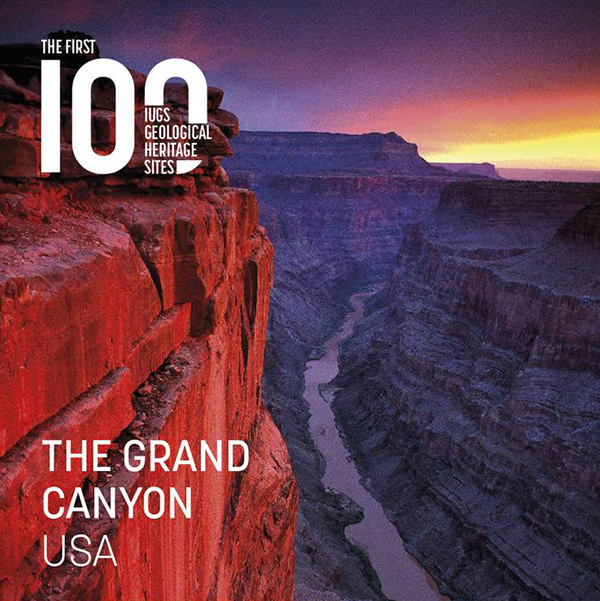 What do Grand Canyon, Zumaia sea cliffs, the La Brea tar pits in Los Angeles, the top of Mount Everest, and Yellowstone’s geysers have in common? They were all formally selected on Oct. 28, 2022, as some of the FIRST 100 IUGS Geoheritage Sites. Fifty more sites have already been accepted for the SECOND 100. What the sites have in common is their high international scientific and societal importance (https://iugs60.org/100-geosites/). There were 181 applications from 56 countries that were carefully evaluated by 34 voting members; other sites will follow.

The three-day conference included talks from most of the proposers (mostly in English). Basque music and dance were part of the ceremony, with similarities to Flamenco dance that also has roots in Basque culture. In 1540, Coronado, with numerous Basques, entered what is now New Mexico and the first European, Cardenas, saw Grand Canyon as they journeyed to Arizona.

“In New Mexico we share a diverse human heritage that includes Native, Hispanic, and other cultures,” said Crossey. “We also share a common geo heritage and the combination can help us reach forward.”

“Geo” means Earth and heritage means history. Geoheritage extends back a very, very long time, 4.567 billion years. For the past few million years, Earth has been hosting us (humans). In Spain, the Basque culture extends back thousands of years, and the Basque language may be the oldest in Europe. In Arizona and New Mexico, USA, the Puebloan and pre-Puebloan cultures extend back thousands of years.

“The timeframes for different Geoheritage sites range from billions and millions of years, down to thousands, hundreds, and tens of years. The sense of the IUGS geoscientists in Zumaia was that timescales merge and Geoheritage and human heritage coevolve,” said Karlstrom. “Earth provides resources for resourceful humans to thrive. But apparently, we have thrived too much and in just hundreds of years since the industrial revolution, we have depleted resources, released too much CO2 from burning fossil fuels, and caused major climate change on Earth. Geoheritage tells us that many such changes happened in the past, that Earth re-balances, but often with new species replacing extinct ones.”

Some of the new Geoheritage sites, like Grand Canyon and Yellowstone, seem well protected, but these more than others have an important leadership role to play for science and education and sustainability. Other sites without such additional protective status will benefit from international recognition to protect them from being erased by development and whims of national and local politics.

Grand Canyon became a UNESCO (United Nations Educational, Scientific and Cultural Organization) World Heritage Site in 1979, but the USA withdrew from USESCO in 1984, rejoined in 2003, and withdrew again in 2019. This national faltering reinforces why Grand Canyon needs to be an IUGS Geoheritage site.

These vertical layers of sedimentary rock line the coast for miles and form the backdrop for the beautiful town of Zumaia, Spain. The layers, like pages in a book, record Earth history, including the 66 million-year-old extinction of the dinosaurs.

“The hope of the proposers is that Grand Canyon National Park, in its second hundred years, will embrace its role as a leader in both the NPS and IUGS,” said Crossey. “Part of addressing challenges in the current century involves incorporating Native voices in envisioning and managing a new Geoheritage vision that applies nationally, internationally, and across cultures.”

The related UNESCO Global Geoparks initiative is focused on bottom-up sustainable economic development. The village of Zumaia, already a Global Geopark, has been vibrantly successful in bringing geotourism and needed economic development, and their new Geoheritage Site designation strengthens these eﬀorts. This place has succeeded because of the passion of its local advocates to sustainably link Basque heritage to preservation of global geoheritage, with emphasis on research and education in earth and life sciences.

“Grand Canyon was the only location with two successful IUGS Geohertitage Sites: ‘The Grand Canyon,’ and ‘The Great Unconformity at Grand Canyon,’” said Karlstrom. “The first highlights the rocks and landscapes that are spectacularly visible; the second highlights the “black holes” where erosional processes have removed part of the rock record—Yin and Yang. Each global Geoheritage site is unique and portrays just a representative piece of global geoheritage. 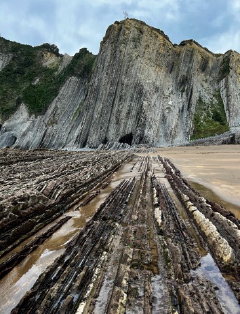 Deep-water sedimentary layers called flysch formed and were tilted during plate tectonic opening and closing of the Bay of Biscay and the formation of the Pyrenees Mountains about 60 million years ago.

“Each requires bottom-up, site-specific, and passionate advocacy. Grand Canyon may not feel a need for more than its present 6 million annual visitors, but it does need to continue to expand its international status in interpreting geo and human heritage for public education and regional development.”

With the centerpiece of Grand Canyon, many of the elements for successful regional geotourism are already in place, but acceptance of a “geoheritage without borders” partnership by tribes, towns, federal, and international agencies could lead to additional advances in sustainable management, development, and preservation of this iconic region of the Earth and her people.