Dr. David Peabody and Dr. Bryce Chackerian, professors in the Department of Molecular Genetics & Microbiology have been chosen to receive the 2017 STC.UNM Innovation Fellow Award in recognition of their achievements as leading innovators at The University of New Mexico.

The STC.UNM (STC) Board of Directors presents this special award each year to a university faculty inventor(s) whose body of technologies have made a significant social and economic impact on society and the marketplace.  The award will be presented to Peabody and Chackerian at STC’s 2017 Innovation Awards Dinner on April 4.

The annual event also recognizes UNM faculty, staff and students who have received issued U. S. patents, trademarks and registered copyrights within the past year. In addition to receiving the Innovation Fellow Award, Peabody and Chackerian will each receive an Innovation Award for five issued patents this year.

“We are so pleased to recognize these two top innovators at UNM with the 2017 STC.UNM Innovation Fellow Award,” said STC CEO Lisa Kuttila on behalf of the entire STC.UNM Board of Directors. “Each in his own right is an outstanding inventor, and as collaborators, they are a match made in heaven. Dr. Peabody and Dr. Chackerian’s body of technologies represent a new way to make vaccines using their novel virus-like particle platform. 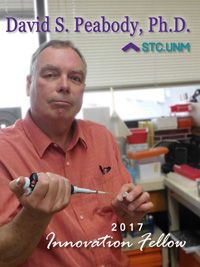 “These VLP technologies have limitless potential to treat infectious and chronic diseases.  The importance of innovations in vaccine development, particularly to developing countries, cannot be under-estimated. Vaccines that are more effective, faster to create, and cheaper to make are a global need that require our ingenuity to treat preventable infectious diseases and the new and unknown ones on the horizon.  And now an entirely new class of vaccines is being developed for chronic diseases, the new treatment frontier.”

“We do many things well at the UNM Health Sciences Center, but I’m particularly proud of the work that David Peabody and Bryce Chackerian have been doing to develop vaccines to address a wide variety of human illnesses,” said UNM HSC Chancellor and School of Medicine Dean Paul Roth. “Their research represents a significant step forward in medical technology.

"For the first time, the power of the human immune system might be harnessed against some of our most pressing health concerns, including infectious diseases like Human Papillomavirus, HIV and Zika virus, as well as to treat chronic conditions like rheumatoid arthritis, heart disease and cancer. I want to congratulate them for this much-deserved award.”

Peabody received his Ph.D. in biochemistry from the University of Utah. As a postdoctoral fellow, he trained in the laboratory of Dr. Paul Berg (Nobel Prize, 1980) at the Stanford University Medical School and came to UNM as an assistant professor in 1984.

For most of his career, he studied the single-strand RNA viruses of bacteria (the RNA bacteriophages) as model systems to understand the role of RNA-protein interactions in gene regulation, but in the last 10 years turned his attention to adapting the virus-like particles (VLPs) of these phages as platforms for vaccine discovery and delivery. 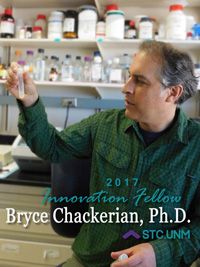 Chackerian received his Ph.D. from the University of Washington.  As a postdoctoral fellow, he trained in the laboratory of Dr. John Schiller at the National Cancer Institute.  In 2004, he joined the Department of Molecular Genetics & Microbiology at UNM. He is a member of the UNM Comprehensive Cancer Center and the Center for Infectious Disease and Immunity.

Chackerian's laboratory is interested in vaccine development, particularly the use of virus particles as platforms for antigen display.  It has long been recognized that highly dense repetitive antigens such as virus particles induce strong immune responses.  Chackerian’s laboratory has exploited these structural features to develop vaccines in which virus-like particles (VLPs) are used as platforms to display practically any epitope in this highly immunogenic, multivalent format.

Together, the two inventors have developed a wide range of tools that allow them to use the versatile bacteriophage VLP technology to rationally engineer novel vaccines and also discover vaccines through an empirical affinity selection-based technology that target not only infectious diseases but the self-antigens that are involved in chronic diseases as well.