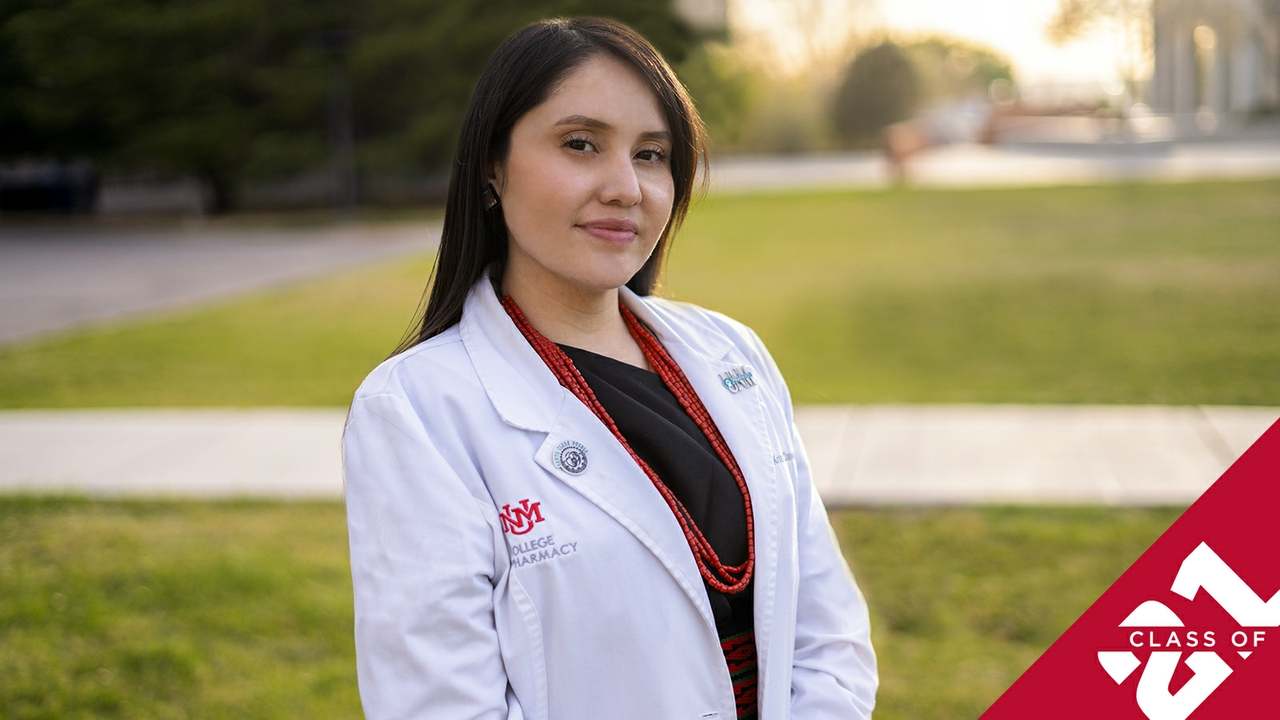 After 11 long years, Krissa Chavarria will don a hard-earned white coat when she graduates from The University of New Mexico College of Pharmacy in May with a doctor of pharmacy degree.

Her educational journey entailed retaking classes, learning new ways of studying, or finding the courage to ask for help. But at the end of it all, she knew her persistence would pay off. 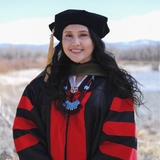 “I always do everything with heart, that's how I was taught – you do a thing with your heart, your mind, good purposes,” Chavarria says.

In addition to her personal growth during college, she also took care of family members who have chronic medical conditions – her aunt is legally blind, her uncle is wheelchair-bound and her godbrother had brain tumors and continues to have difficulties.

Chavarria, 28, grew up on Santa Clara Pueblo and was raised by her uncle, Bernard Chavarria, who was a diabetic. As a child, she helped him with his insulin, and that’s how she became interested in pharmacy, she says. He died when she was in elementary school, and from 7th through 12th grades she attended and lived at the Santa Fe Indian School.

“He was my home,” she says. “Without him raising me, I wouldn't be who I am today. He gave me humor, and I had to lose him at a young age, but it also taught me responsibility for myself: ‘If I don't do it, no one's going to do it for me. I'm the one in charge.’

“I didn't have a stable home after he passed, I was kind of all over, and then my mom came back, so I started living with her but I've kind of had to figure out like, ‘OK, what do I need to do?’ And I always knew I wanted to go into pharmacy school.”

Chavarria spent the summer before her senior year of high school writing drafts of essays for the Gates Millennium scholarship application, which she was awarded. It paid for all of her undergraduate education. “I knew I really wanted it,” she says. “I made it my purpose.”

“I always do everything with heart, that's how I was taught – you do a thing with your heart, your mind, good purposes.” – Krissa Chavarria, Class of 2021

That steadfast determination also worked as a hindrance when she decided that she would “figure it out on my own,” rather than ask for help in her undergraduate years at UNM, she says. But when one of her friends applied and was accepted into the College of Pharmacy, Chavarria looked to her for guidance.

She still stumbled. For example, she had to take some classes twice. And when she first applied to the College of Pharmacy, she didn’t get in. Her interview was impressive enough that the admissions committee selected her for the Pathways to Pharmacy program, designed for students with a high passion for pharmacy who could use some additional support in building their confidence and academic success.

At the same time, she was accepted into the program, she also was selected to be a dancer for Santa Clara’s winter dances.

“Not a lot of women get picked,” she says. “It's a once-in-a-lifetime thing. Sometimes you get picked a second time, but a lot of times, some people don't get picked at all. It was an honor to be able to participate and represent my community and everything.”

She received a scholarship from the Indian Health Service that paid for tuition and included a stipend for her last year of pharmacy school. She’ll have to work with IHS as part of a condition of her scholarship, and she plans to move back to Santa Clara.

“My end goal is to work in Santa Clara with my people because I grew up there,” she says. “I just feel like I can bring something back that someone who isn't from Santa Clara can’t.

“I understand the struggle with having to eat healthy, having to exercise, what we lack and what we need to do. My main goal is to work with IHS and help our native people because we are underserved.”

Her advice to those who feel like college work is overwhelming: “You can be whoever you want to be, but your heart has to be in it. You have to have a connection, a purpose.”

In the end, she adds, “it’s up to you. There’s things I wish I could change but then I wouldn’t be the person I am today.”

She credits family, especially her aunt Cynthia Tafoya, friends and community for helping her achieve her goal. “I wouldn’t have done it without her. She's always here for me and she doesn't know how much she's given to me.

“I can honestly say I am proud of what I've done and what I'm going to be continuing to do.”