Free parking on campus right next to the Student Union Building (SUB). Friendly pool and bowling games at lunch time. Half-priced breakfast and lunch for employees at the SUB. These are just a few of the nostalgic things Irvin Romero remembers of The University of New Mexico in 1966, the year he was officially hired as UNM staff. Today, 50 years later, Romero is still working on North Campus in the Family Practice Center as a custodian for the Physical Plant Department (PPD).

As you can imagine, many things have changed since 1966. This is the year that Popejoy Hall opened, as well as The Pit (now named WisePies Arena). Romero was just 19 years old earning $1.20 an hour, working in the SUB on a team called the “custodial specials.” Their primary responsibility was to set up and tear down events, as well as maintain cleanliness in the facility.

“It was really nice working for the SUB all those years, 24 years to be exact,” Romero said. “In 1990, they moved the custodial staff from the SUB to PPD, and I’ve been here ever since.”

Looking back, Romero never thought he would be working at UNM 50 years later.

“I just kind of fell into work at UNM and was having a nice time, so I stayed. Before you know it, it’s 50 years later!” he said. 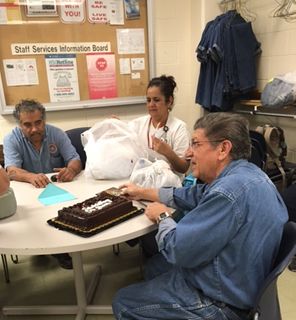 Irvin Romero, right, enjoys a break with some colleagues. Romero has been working on the UNM campus for 50 years.

Born in Seboyeta, N.M., Romero grew up amongst alfalfa farmers and a community where gardens grew and people took care of one another. He is one of the “old-timers” left on campus that values land and space, a steady hand-shake, and an unwavering work ethic. The people are what has mattered to Romero over the decades.

“I’ve met some really interesting people over the years. UNM has been a good employer. I’ve always had steady work – I could always count on that,” said Romero.

The UNM campus has grown by 249 buildings over the last five decades says Romero.

Romero offered some words of wisdom to anyone beginning the journey as an employee at The University:

“Think about retirement at a young age. Plan for the future. Work steady,” he said.