With construction underway all over The University of New Mexico campus, and more to begin in the not-so-distant future, President Robert G. Frank held his annual Open House to keep UNM’s community partners informed about what’s going on.

“We’re very excited about all of these projects and know they will have a major impact on the University and our students,” Frank said. “They will also have some effect on our neighbors, so it’s important for us to have a dialogue with them, answer questions and work together on these important projects.” 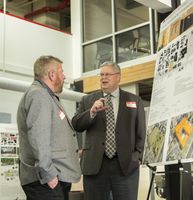 Mark Peceny, Dean of the UNM College of Arts and Sciences talking about the Physics & Astronomy, Interdisciplinary Science facility. The proposed building will include state-of-the-art research space, classrooms, office space and much more.

“We want to hear from our neighbors, we want to know what they think of our projects and we want to include them in our process,” said University Architect Amy Coburn, who is also the director of Planning, Design & Construction.

The President’s Office invited representatives from nearby neighborhood associations, contractors and architects to the event. Many of those in attendance said they were very appreciative to learn more about the projects and how they will affect their communities. 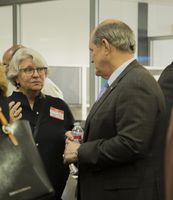 “Too often you hear rumors and immediately think the University is going to build some big, ugly building that’s going to make lots of noise all night long,” said Chuck Maguire, president of the Netherwood Park Neighborhood Association. “When in reality you’re just going to be building a great facility for the science department. So, the dialogue is great and very appreciated.”

Because of their locations, several of the projects will likely have an effect on foot and vehicle traffic on and around campus. University officials say because of that, UNM’s neighbors may also be impacted during construction. President Frank said that is just one of the reasons he felt it important to include and inform neighborhood representatives of the projects.

“We thank President Frank very much for inviting us to these open house events and making sure we’re informed about what’s going on,” said Maguire.

Several of the capital projects are already underway while others are still in the planning phase. Currently, construction is scheduled to be completed by 2019 for all six of the projects.