Professor Emeritus Melvin Yazawa will be at The University of New Mexico Bookstore on Tuesday, Sept. 20 at 1 p.m. to sign copies of “Contested Conventions.” This event is open to the public. 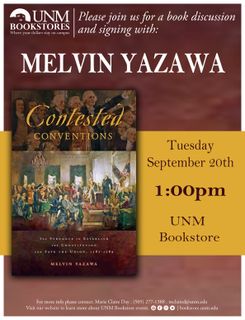 Melvin Yazawa joined the UNM History department in 1984. He has since developed a variety of undergraduate courses and graduate seminars. He has authored multiple publications, including From Colonies to Commonwealth and The Diary and Life of Samuel Sewall.

The UNM Bookstore is located at 2301 Central Avenue NE at the intersection of Cornell and Central. Contact Marie Claire Day at 505-277-1388 or mclaired@unm.edu for more information.