In honor of Women’s History Month, a University of New Mexico professor was recently highlighted in the National Science Foundation’s Directorate for Social, Behavioral and Economic Sciences. 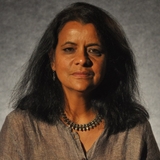 Roli Varma is a professor of public administration. She was one of 10 featured scientists who study different aspects of the problem of low participation of women in various STEM fields including economics, engineering and computer science.

There are many reasons why dramatic gender differences still remain in many scientific fields. Research shows a range of causes from actual bias and stereotyping to self-concepts, cultural norms and lack of mentors and role models.

The 10 featured women tackle the question: what should people know about broadening participation of women in STEM?

Varma studies the number of woman earning bachelor’s degrees in computer science and engineering compared in different countries, and what causes the numbers to be so low. She says that “in the U.S., girls have to face considerable biases during their K-12 education from both peers and teachers, including the idea that women cannot excel in mathematics.”

Additional posts and information can be found on the SBE’s blog and Twitter.