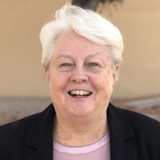 PTK, the national honor society of two-year institutions, will recognize Letteney along with six other retiring recipients next month at Catalyst 2022, the annual convention in Colorado. The Bennett lifetime award is presented to retiring college presidents/chancellors who have shown support of student success initiatives during their collegiate endeavors.

“These college leaders have made student success a priority throughout their career,” said Lynn Tincher-Ladner, PTK president and CEO. “Their nomination is evidence of the gratitude their PTK students feel for supporting them and students like them as they work toward completion, transfer and employment.”

Letteney, who was nominated by the Beta Zeta Zeta Chapter at UNM-Valencia, served on the PTK Advisory Board, and was previously honored with a PTK Shirley B. Gordon Award of Distinction in 2015.

The award of distinction nationally recognizes college presidents who have taken an active interest in supporting high-achieving students and developing student leaders on campus and based on outstanding efforts given toward promoting the goals of PTK.

“Dr. Letteney has always been concerned with the retention and completion (of degrees or certificates) of our students,” said Kaydra Townsend, PTK chapter advisor. “Dr. Letteney believes not only in students succeeding in the classroom, but out of it as well.”

After more than 27 years at UNM-Valencia, Letteney will be retiring at the end of July 2022.