Rare disorder leads Midwesterner to find her place at UNM

Lobos come to The University of New Mexico from all over the world, for a variety of reasons. For many, UNM is the hometown University – for others, the world class academics attracted them here – but, when Brie Mulligan started college in the Midwest, she never imagined an autoimmune disease would lead her to New Mexico and to becoming a Lobo.

At 19-years-old, Mulligan was enjoying college life and excelling in her biochemistry program at a college three hours from her home in northwest Chicago. Her parents had packed up and moved to New Mexico after Mulligan had left home, but she stayed behind to continue at her college.

“My muscles were sort of having an asthma attack, but for months at a time” she said. “What happens is that white blood cells flood the layer between my muscles and my skin – to the point that the layer no longer has flexibility. Basically, I get stuck. I can’t fully extend or retract my arms or legs all the way”

Mulligan ended up being diagnosed with Systemic Scleroderma, a rare autoimmune disease doctors worried could have a life-long, debilitating impact on her quality of life. Because of the symptoms, Mulligan wasn’t able to live her life like a normal college student. So, when she came home to Albuquerque for her winter break, she decided to stay and get help from her parents as she underwent treatment.

While in the Duke City, Mulligan decided to do something productive with her time and got an internship with UNM Chemical Biology Professor Charles Melancon III. But, what began as a six-week position, quickly became something much more.

Doctors told Mulligan she would have to undergo a year-long treatment regime and would need to stay in Albuquerque for at least that amount of time. Because she was missing so much school, her scholarships were pulled and she ended up leaving her former college.

“With the initial diagnosis, doctors were so concerned that I was going to become completely stuck in my own skin that I wouldn’t be able to care for myself. I couldn’t go back to school in the Midwest,” she said. “The outlook was not good.” 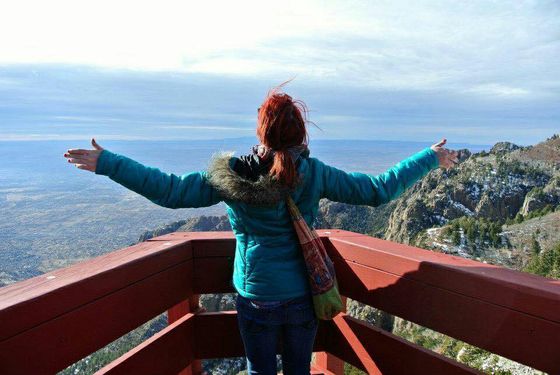 Soon after being diagnosed with Eosinophilic Fasciitis, Mulligan took this picture at Sandia Peak. Due to her condition, this was as far as she was able to extend her arms.

But, even as things appeared to not being going her way, Mulligan persevered, continuing to work in the lab and staying positive.

Once she knew the length of time she would have to live in Albuquerque, she decided she needed to get back in school, so with support from her colleagues in the lab, Mulligan immediately applied to UNM and transferred in – becoming a Lobo. Turns out her initial diagnosis was wrong and doctors re-diagnosed her with Eosinophilic Fasciitis, a much more manageable autoimmune disorder. However, she says transferring was one of the best decisions she’s ever made.

Once the semester began, Mulligan started excelling in the classroom and the lab. She says the Lobo faculty went above and beyond to help her pursue her interests, especially during flare-ups from her disorder. Today, Mulligan’s condition is mostly under control and she’s getting ready to graduate with a B.S. in Biochemistry and departmental honors. She’s also planning to start a Master’s program, also at UNM – the place she says gave her a chance to succeed. 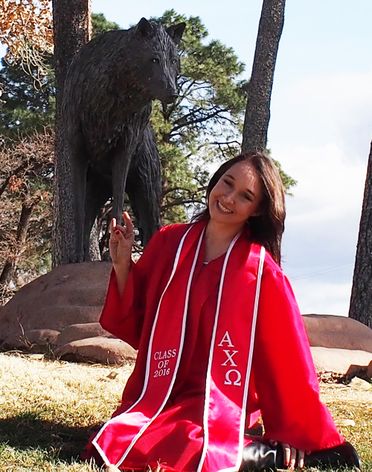 “UNM has been phenomenal for me. The faculty in both the computer science and biochemistry departments have been so willing to work with me when I’m sick,” she said. “UNM has really been a series of open doors. I’ve been really grateful for UNM and all the opportunities that I’ve been afforded since transferring here.”

And while her disease is something that has forced many changes onto her, she says it’s also given her life direction. Mulligan’s initial passion for science has led her to work in a research lab to further examine what makes people sick and eventually find the cause of these complicated autoimmune disorders. She hopes her efforts will eventually help others live better lives.