Recovering after a disaster

A group of people gathered to watch as a crane slowly lowered a damaged helicopter from the roof of the six-story University of New Mexico Hospital on Saturday, April 12. Many of the UNM employees closely involved in the operation were elsewhere – in one of the two emergency operation centers working on campus, in one of the buildings running on emergency power, or in the hospital, which was operating completely on emergency power.

It all began just before 6 p.m. Wednesday, April 9 when a helicopter lifting off from the roof of the hospital lost control, began spinning and slammed hard back onto the roof, catching fire.  Hospital security staff quickly rescued the pilot and crew members and put out the fire.  Fortunately, no one sustained more than minor injuries, but the crash landing was hard enough to penetrate the roof of the hospital. As a precaution patients in the inpatient pediatric specialty care unit just below the crash were moved to another part of the hospital.

Immediate following the crash, state and construction structural engineers were onside inspecting the building and damage. Investigators from the Federal Aviation Administration and the National Transportation Safety Board took control of the scene as they sought to determine what had caused the helicopter to crash on the roof. UNM is the only level one trauma center in the state and receives patients daily by medical helicopter.

Meanwhile the emergency operations center at UNMH was beginning to make plans to remove the helicopter as soon as the investigators were finished.

UNM main campus activated its emergency operations center on Friday because investigators indicated that the helicopter could be removed on Saturday. Now there were two emergency operations centers (EOCs) working, one in the hospital focused on direct patient care and safety and keeping the hospital running as smoothly as possible. The main campus EOC across the street focused on solving the infrastructure related problems the helicopter removal process was going to create. 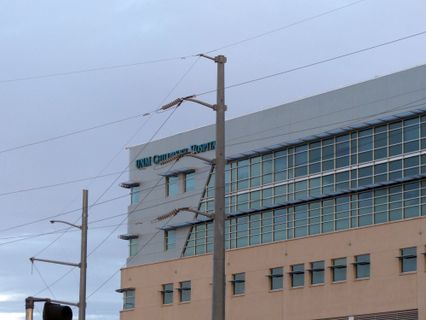 In order to remove the helicopter from the roof, power from the lines had to be de-energized, the hospital put on emergency generators, and all electrical power shut down to the main campus. UNM produces its own power and have about 40 or so emergency generators on campus that can handle part, but not all, of the load.

Taking UNM off power from the PNM electrical grid probably meant some buildings would receive limited or no power for a short time while the electrical load was shifted off the grid and onto the UNM power generation units. But this was all untested territory. UNM’s Utilities Division had never needed to completely isolate the main and north campuses from the electrical grid before.

As UNM separated from the electrical grid, power was produced by two turbines at the Ford Utilities Center would be needed to power buildings on the main campus. In the emergency operation center university administrators were focused on how to prepare the campus for the power disruption. 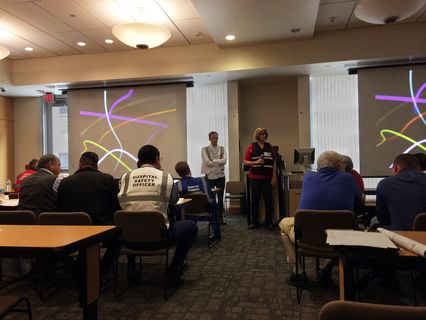 UNM EOC director Ava Lovell led the efforts to identify which buildings on campus had the most critical need for power, such as those housing students and researchers. “The group had to make decisions about where power to the heating and cooling systems could be cut and what activities to cancel,“ Lovell said.

The helicopter removal date was a particularly busy day on campus. The UNM Fiestas were being held on Johnson Field attracting thousands. EOC planners decided to allow outdoor activities to go on as scheduled but cancelled anything planned of indoors before noon, including classes and workshops in the Student Union Building. The thinking was if there was a delay in restoring power that affected heating and cooling or fire suppression systems, it would be better to cancel events than to have to deal with hundreds of people impacted by an outage.

Two weddings in the Alumni Chapel were allowed to continue because they were scheduled for afternoon, and there were windows that would allow some light even if the power was not back on by then.

The Ford Utilities Center on campus has a specialized computer that is programmed to simultaneously assess the status of the two turbines and the PNM grid.  If it “senses” that the PNM grid has gone down, it then assesses the condition of the turbines and can automatically shut off one turbine. Under normal conditions that protects the units from producing more power than can be used and prevents damage to the units.

For the power reroute caused by the helicopter removal, UNM needed to alter the programming. Utility administrators consulted with the contractors that maintain and program the computer. The contractor reviewed the programming and assured the utilities personnel it would not shut off a turbine. However, on Saturday morning, as UNM separated from the PNM electrical grid,  the computer sensed a PNM outage and initiated an automatic shutdown of one turbine.

The other turbine was immediately overloaded and shut down automatically to protect itself. “That led to a cascade effect that shut off the entire plant," UNM Associate Director of Utilities Jeff Zumwalt said. "We were able to restart one turbine and power parts of the campus, but the computer programming problem led to a 24-hour lockout of the other turbine and it could not be used.”

By mid-morning, the crane had lifted the helicopter off the roof. The hospital moved back to the power grid, then the outpatient surgery units and other buildings on the north campus. After that, the complex effort to reconnect the main campus buildings began.

UNM is celebrating its 125th birthday this year. The electrical infrastructure is much younger, but it’s not automated. Physical Plant employees had to reset electrical connections in each of the more than 300 buildings on the main campus. There were some problems with backup power in some buildings on campus.

Now the university is looking at lessons learned. They say equipment not secured in advance is being inspected for damage and reported to the appropriate colleges.

There were some issues in main campus research facilities where there were problems with back-up power systems. The Office of the Vice President for Research is still assessing the extent of the impact of the outage on research.

Throughout the event, there was only one minor injury – the pilot of the helicopter. In all hundreds of people at UNM were part of the emergency response effort.

“We cannot foresee every possible situation that we may face," University Emergency Manager Byron Piatt said. "We do, however, plan for many different types of situations including fires and infrastructure failure, which all came into play during this incident. We also practice the process of responding to and recovering from such incidents.  All this preparedness has proven to be invaluable. We will take the lessons we’ve learned, modify our plans and incorporate this into our future exercises.”