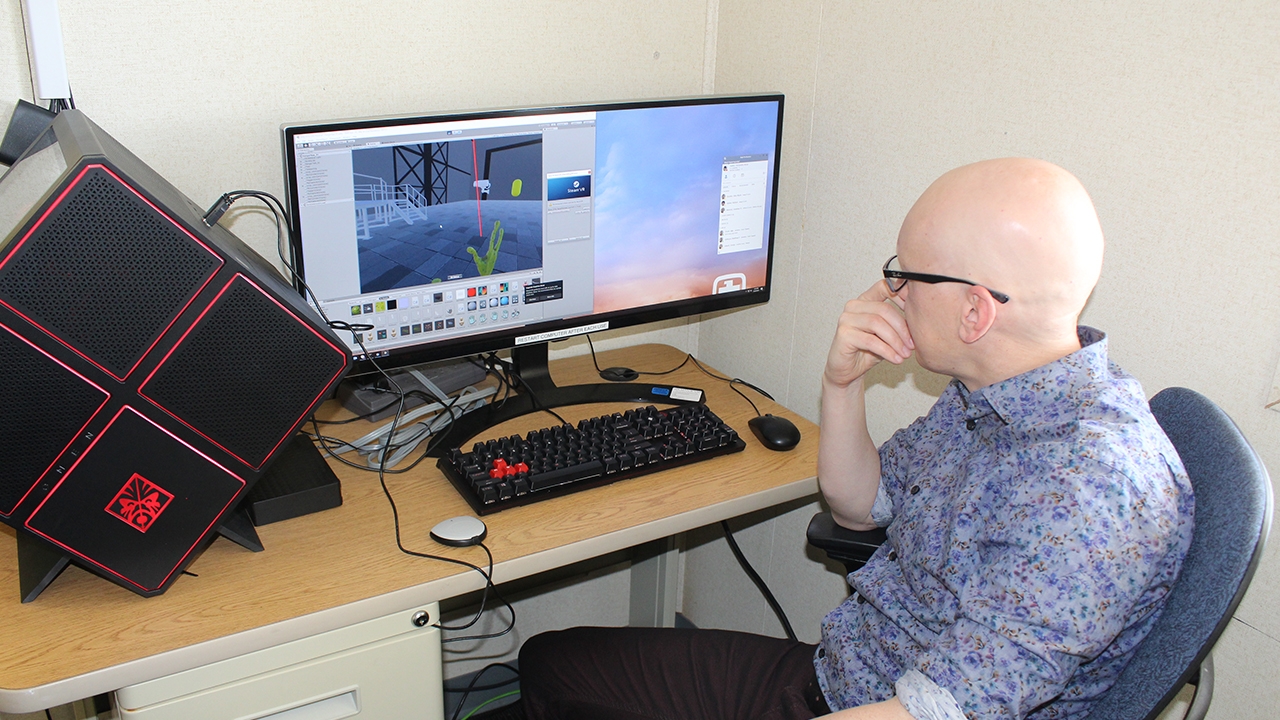 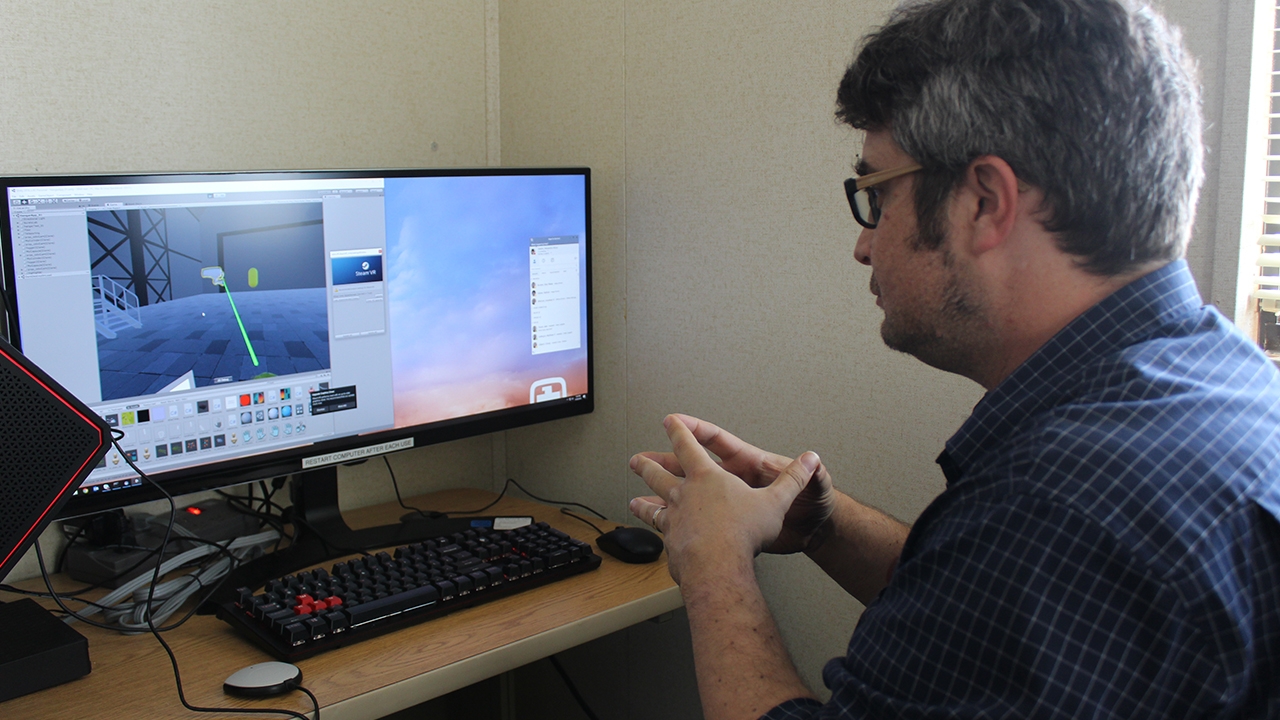 The Sandia internships are under the guidance of Nathan Fabian along with Jon Whetzel. Fabian is a Senior Member of the Sandia technical staff an adjunct professor at UNM co-teaching game development. 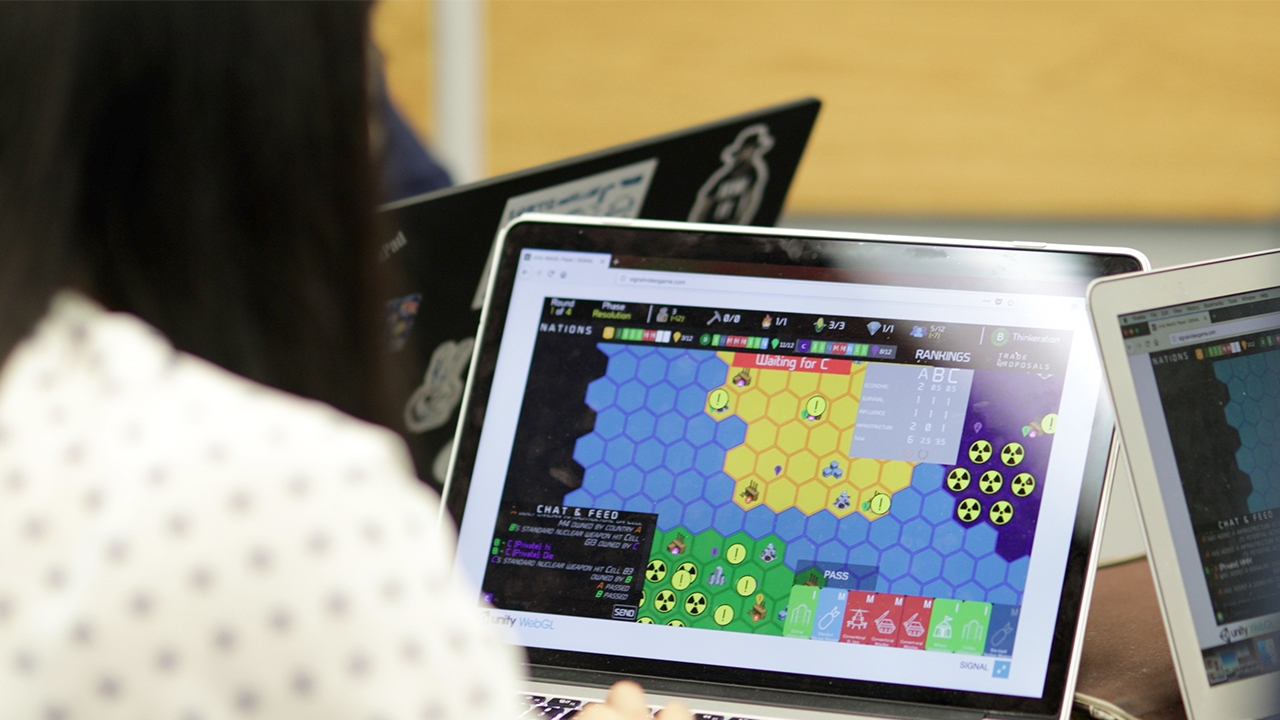 As part of the Sandia internship, Alexandra Valdez worked as the lead artist on SIGNAL, a new online experimental wargame developed in collaboration with the University of California, Berkeley and Lawrence Livermore National Laboratory through the Project on Nuclear Gaming. She designed and created the visual assets used in the game and also helped make minor changes to the code base. 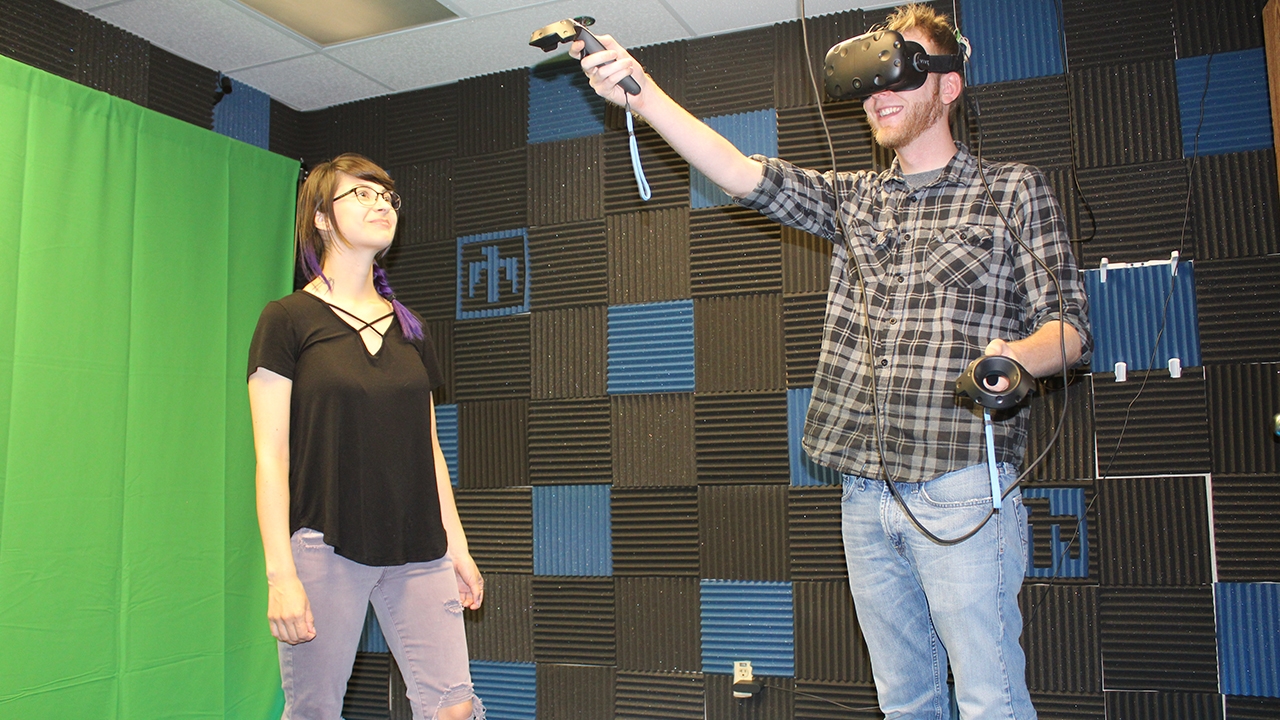 Recent graduates Alex Booher and Alexandra Valdez came from different academic areas in the Film & Digital Arts department at The University of New Mexico, but both ended up in internships with Sandia National Laboratories where their skills in game development went far beyond gaming for entertainment.

Recent graduates Alex Booher and Alexandra Valdez came from different academic areas to the Film & Digital Arts department at The University of New Mexico, but both ended up in internships with Sandia National Laboratories where their skills in game development went far beyond gaming for entertainment.

The internships came about because of the increase in using commercial gaming development skills for research and training purposes at Sandia.

“Sandia is looking for students with game development skills. The need is becoming greater and greater because we’re doing more and more in this area,” Whetzel said.

Video gaming has gone far beyond entertainment, and are increasingly helping Sandia’s mission of national security, Whetzel said, adding that using and applying gaming technology has spread throughout many of the labs’ departments.

“As games get more complex, we can see correlates between the game world and the real world. It creates a rich environment and datasets to test hypotheses about how groups are formed and how they react to changes in the environment, economic market disruptions, tribes or groups in conflict and how they resolve those conflicts, and decision making on policies that impact large populations. It’s a proxy for the real world,” Whetzel explained.

Whetzel said Valdez and Booher brought not only the technical skills Sandia needed, but also “more of the humanities and artistic talents to better develop the applications we’re creating. The human element is so key.”

“I pursued film for about a year before jumping into computer programming after finding a strong interest in it while taking a required introductory Computer Science course for the program. Since Film & Digital Arts is an interdisciplinary program, it was easy to transition to a game development focus and pursue a minor in Computer Science,” Booher said. “I met Jon at his game development course… I had been working on a small game engine with a couple of friends, and I showed it to Jon during his office hours to see what he thought. He said I'd make a good fit at Sandia since a big portion of what's worked on in his division is ‘Serious Games’ and simulation. After that, we set up the internship.”

“I began at UNM as a Studio Art major in fall of 2010 who was always interested in digital art but wasn’t sure how to pursue it. I ended up taking a couple years off school to work and figure out what I wanted to do, when I heard about Film & Digital Arts by word of mouth some time in 2013. I was drawn to the program because it offered classes in game development and 3D production and was hooked ever since,” Valdez said.

“I’ve learned more than I ever thought possible. When I first entered the program, I didn’t know exactly what I wanted to do after school, but that it would be somewhere in this realm. Film & Digital Arts introduced me to programming, 3D production, storytelling, VFX, and even Virtual Reality development. For my senior capstone project, we made a fully functional video game — a feat I never imagined I would accomplish or be a part of,” she added.

As part of the Sandia internship, Valdez worked as the lead artist on SIGNAL, a new online experimental wargame developed in collaboration with the University of California, Berkeley and Lawrence Livermore National Laboratory through the Project on Nuclear Gaming. She designed and created the visual assets used in the game and also helped make minor changes to the code base.

According to a Sandia press release “The game, SIGNAL, which goes online this spring after its launch as a board game last year, offers players a chance to make strategic decisions using modern political, economic and military tools. By analyzing players’ strategies, researchers seek to better understand how new experimental gaming techniques can deepen insight into conflict escalation and the potential implications of new weapon types and technologies.”  SIGNALis currently available to play.

Booher worked on other projects during the Sandia internship.

The outlook for careers in the field of game development is expanding, with many student interns going into the entertainment field but many find their skills are highly sought by the National Labs, Apple, Google, and many other organizations.

Booher and Valdez have their Film & Digital Arts studies and Sandia internships on their resumes  and are now looking to their career futures.

“I was an intern at Sandia for almost two years, and it's hard to keep track of all the things I've learned along the way. It's given me tons of real-world job experience and I've learned a lot of important tools and programming languages that are used by the industry that I don't feel I would have in college. It's certainly made me a more well-rounded person. The people at Sandia have always been very helpful and supportive as well, and I honestly feel pretty spoiled. I'm extremely thankful to Jon for giving us interns these awesome opportunities,” Booher said.

“Everyone was really happy with Alex over here. I expect good things out of him,” Fabian said. Booher was a student of his at Film & Digital Arts before his internship at Sandia.

“I am currently considering a couple graduate programs in game development (University of Central Florida’s FIEA program is at the top of my list) to continue my development as an artist and programmer,” Valdez said. “I’m also seeking any entry-level opportunities in the game industry, focusing mostly on jobs in the Washington and Oregon area, as that’s where the big tech companies and game studios tend to make their home bases. I am decidedly an aspiring ‘technical artist,’ a new and upcoming role in the game industry.”

“Allie is a very talented artist. She’s skilled both as a programmer and an artist. As we move more toward simulating, we’ll see more of a need for technical artist skills in the future,” Fabian noted.