Dr. Kassicieh earned his Ph.D. in Operations Research and International Business from the University of Iowa in 1978 and joined the faculty at UNM in 1981. He held the Endowed Chair in Economic Development at UNM and was Chair of the Finance, International, Technology and Entrepreneurship Department at Anderson. 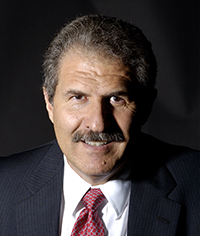 In 2007, Dr. Kassicieh was named the first-ever Distinguished Professor at the Anderson School. It is the highest faculty title bestowed by UNM and is awarded to only a few of the university’s most prominent faculty members.

Dr. Kassicieh was passionate about Economic Development in New Mexico. He was the founder of the UNM Business Plan Competition in 2005. He worked with community leaders and secured funding for the statewide competition that encourages students to become entrepreneurs.

Dr. Kassicieh was a friend and advisor to many during his 36 years at the Anderson School.

Interim Dean Shawn Berman remembers him as a tireless resource for Anderson School of Management students.

“I was lucky enough to have an office across from Sul,” Berman said. “I was always amazed by the constant stream of students who would visit Sul for help on their entry into the business plan competition or just for general advice. He cared deeply about Anderson and worked tirelessly to advance the school. I will miss him greatly.”

Dr. Kassicieh came to Albuquerque in 1973 and earned his BS in Mathematics and MBA in Finance from the University of New Mexico.

“It was his vision that created the competition,” Noonan said. “He exerted great leadership and was one of our unsung heroes in this community.”

The Anderson School sends sincere condolences to his wife, Heyam Kassicieh; his two children, Charlie and Christina; his mother, Raoufeh; and his two siblings, Samir and May.