In the wake of natural disasters, being able to quickly and accurately assess the damage to roads, bridges and other critical infrastructure can save lives. That fact is one of the driving forces for a University of New Mexico research team making big strides in the field of remote sensing.

UNM Assistant Professor of Geography and Environmental Studies Chris Lippitt is the lead researcher on the project, which also has collaborators at San Diego State University and BAE Systems. Lippitt and his team, which also includes UNM Civil Engineering Associate Professor Susan Bogus, have been working through a grant from the United States Department of Transportation Office (DOT) of the Assistant Secretary for Research & Technology. Over the past two years, the project has gone from an idea to a commercial product currently offered through BAE. 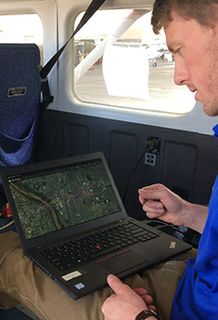 “We’ve designed a capability to map and detect fine scale changes to infrastructure after hazard events,” explained Lippitt. “So, rather than ‘is the bridge missing,’ we ask, ‘is there a crack forming in the bridge?’ And, we’re trying to do it in a completely automated way so that we can take the terabytes of data we collect after an event and analyze it automatically.”

The technology is comprised of two main components; the camera hardware, mounted to a plane or unmanned aerial vehicle (UAV), and the software, which analyzes the pictures taken.

Prior to a disaster event, like an earthquake or hurricane, emergency management crews would fly over populated areas and take baseline photographs of critical pieces of infrastructure. Then, following a disaster, crews fly over those same areas and take more pictures. The software will then match the before-and-after images and detect any superficial changes. From there, it’s up to engineers to determine where the concern is and pass that information along to emergency crews.

“With the way that we have it currently implemented, we’re detecting any changes an inch and a half or larger,” said Lippitt. “And that’s going to get even better as camera technology continues to improve.”

This life-saving technique is just one of the many uses of remote sensing. However, according to Lippitt, for years the problem has been with the cost associated with utilizing these sorts of technologies. 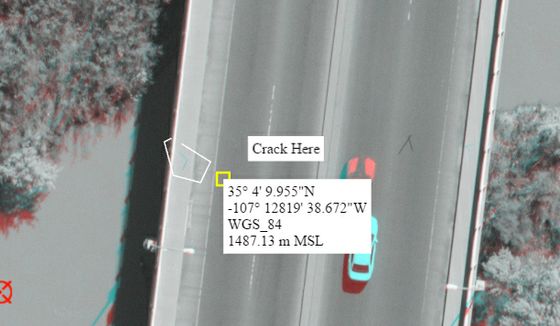 Interpreted products are centralized into a common portal for access by emergency and transportation managers.

“You’re talking about satellites or aircraft, very expensive sensors. So, it’s kind of out of the reach for most states, cities and counties to do much with,” he said. “A big part of my lab’s efforts were to make what is very, very valuable information available from aircraft and satellites cheap and easy to use for more people.”

And Lippitt believes they’ve been able to do that. His team partnered with the Albuquerque wing of the Civil Air Patrol (CAP), a nationwide volunteer organization with the largest fleet of private aircraft in the world. In early November, Lippitt, along with UNM students and CAP, showed the technology to representatives from the Department of Transportation and FEMA. Lippitt says his hope is for these federal organizations to work with CAP to implement the technology on aircraft across the country.

While this project will have a huge impact on how emergency crews work after hazard events, the development has also provided great opportunities for UNM students. Lippitt’s research team is made up of graduate students from a variety of disciplines across campus. He says the project has not only given them the chance to work on cutting edge technology, but also the opportunity to work with federal agencies and private business, helping expand the student’s education.

DOT funding for this project is set to expire later this year. However, Lippitt says his group will continue to improve the technology and find more applications for this kind of remote sensing system.