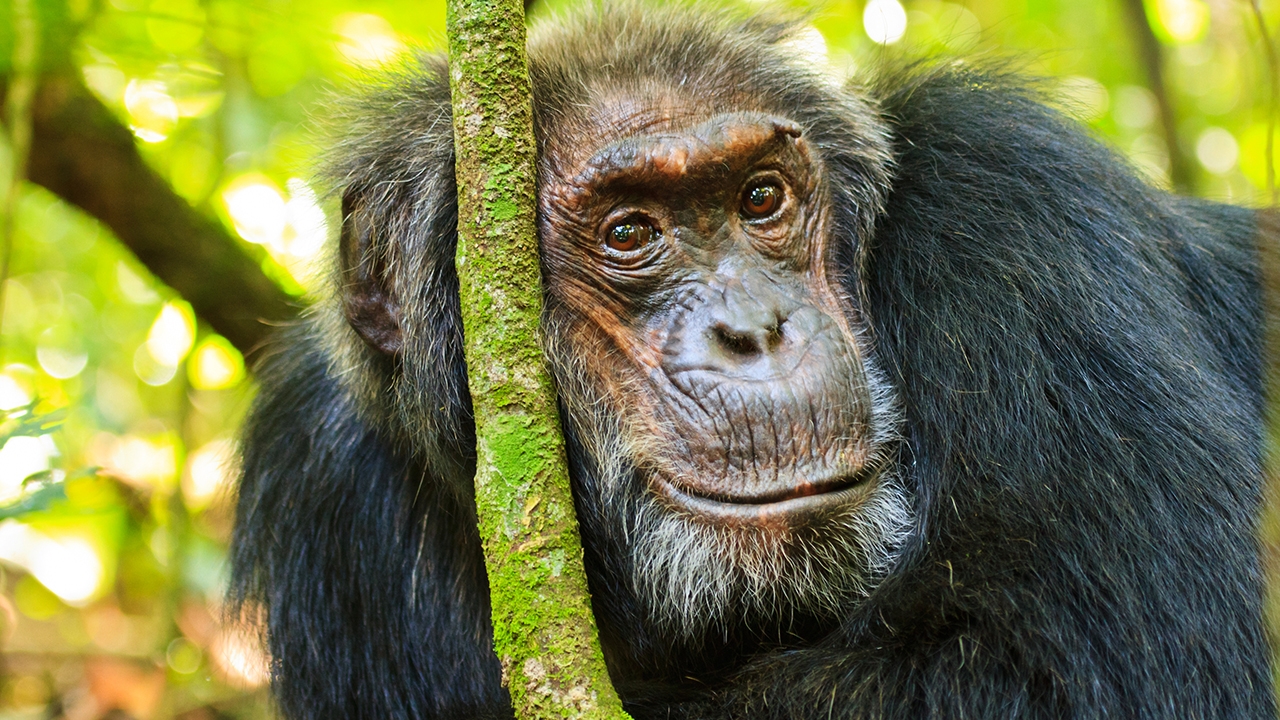 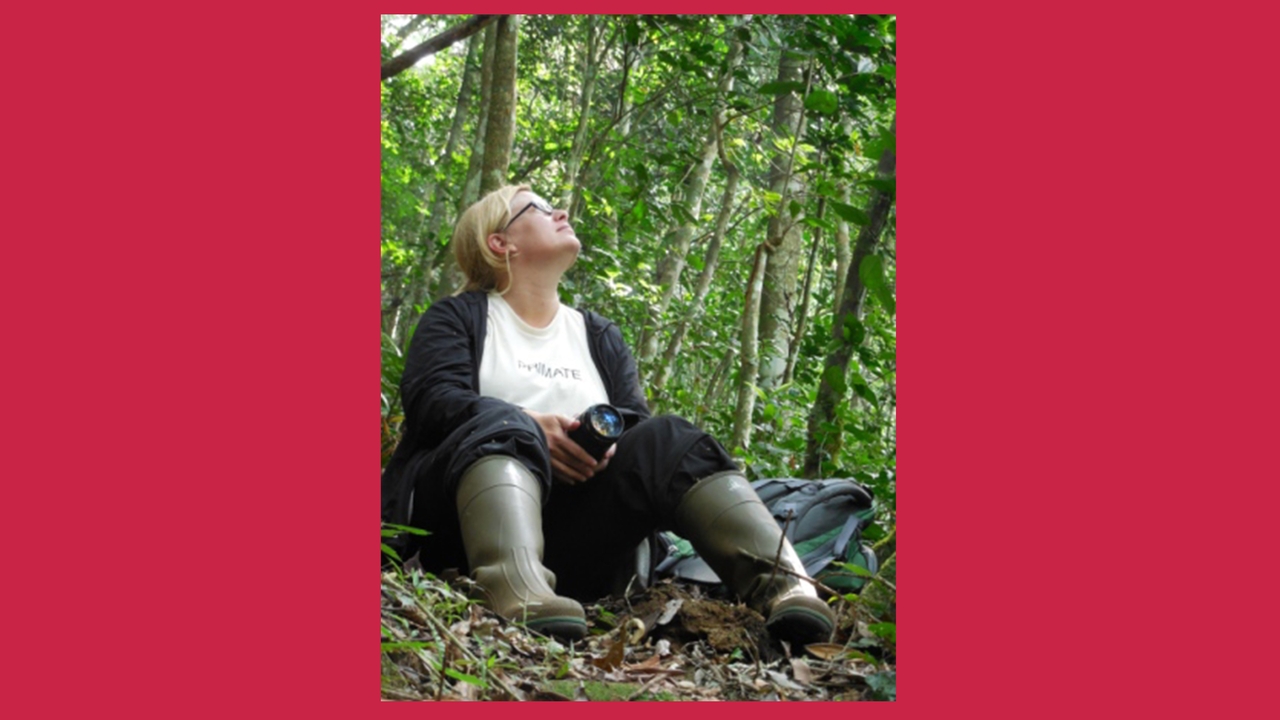 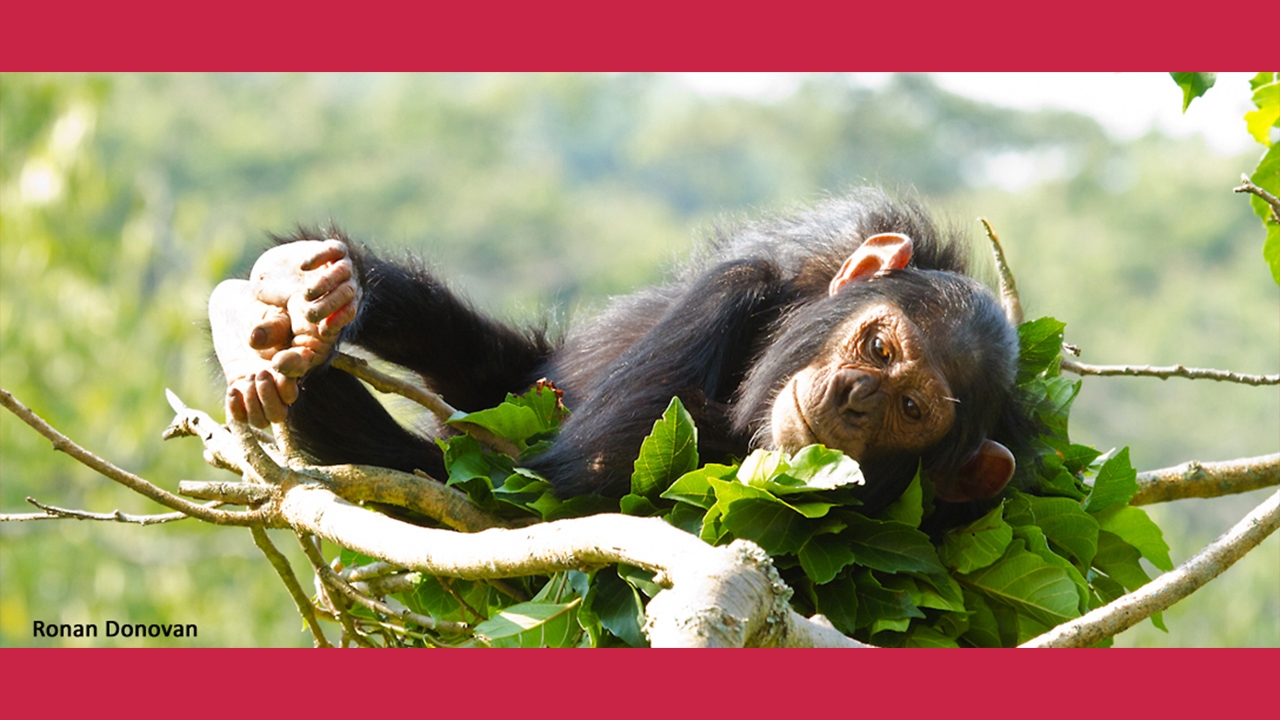 A team of researchers from The University of New Mexico, working with the Kibale Chimpanzee Project in Uganda, have found similarities in the way chimpanzees and humans age. In their recently published paper, Wild chimpanzees exhibit humanlike aging of glucocorticoid regulation, the researchers relate findings of their decades-long study.

The research group has studied a community of about 55 wild chimpanzees in Kibale National Park, Uganda, for the past 32 years. They are currently trying to understand the aging process in chimpanzees and how it compares with that in humans.

“Chimpanzees can live past the age of 60 in the wild and are human's closest living relatives, so the reason for this comparison is to determine which aspects of aging are unique to the human species, or not,” Emery Thompson explained. “This kind of research may help provide clues as to what factors shaped the prolonged human lifespan, as well as the extent to which aging processes are influenced by environment. As an example, neither chimpanzees nor humans living in small-scale subsistence groups are susceptible to atherosclerosis (clogged arteries), suggesting that it may be the unusual diets and activity levels of industrialized societies that places us at risk.”

Cortisol is the key product of the stress response and plays an essential role in energy metabolism. But, high levels of cortisol contribute to many of the degenerative processes of human aging, including bone loss, cardiovascular disease, immunosenescence, which is the gradual deterioration of the immune system brought on by natural age advancement, and cognitive impairments.

Emery Thompson explained that this problem is exacerbated because the system that regulates cortisol production wears out as humans age, so the amount of cortisol we produce increases, along with its negative consequences.

“We found strong evidence that a similar kind of dysregulation occurs in chimpanzees. Their levels of cortisol increased with age, and this could not explained by changes in social status or reproductive activity. Like humans, chimpanzees have a circadian rhythm of cortisol production with a peak early in the morning followed by a decline throughout the day. We found that aging chimpanzees had a blunted circadian rhythm, paralleling an important feature of aging in humans,” Emery Thompson said.

In order to study the cortisol levels in the chimpanzees, the team members had to collect urine samples from the primates.

“Most people want to know how we collect urine,” Emery Thompson laughed. Chimpanzees spend about half of their day up in the trees, where they find most of their food. They also sleep in the trees in nests they make from branches.

“Our research staff uses catchpoles fashioned from forked sticks with small plastic bags on the end to collect the urine as it falls. Like people, chimpanzees usually pee just after they wake up and when they are leaving one location to go to another. We go out before dawn to make sure we find the chimpanzees in their nests and collect urine just as they are beginning their day. Since 1998, we have collected over 40,000 urine samples from this one group of chimpanzees. We can use these samples to monitor reproductive function, stress, energetic condition, lean body mass, hydration, and indicators of health.”

Many of the same things that stress humans also stress the chimpanzees.

Chimpanzees live in complex social networks, which can cause all kinds of stress as individuals compete for food, status, and mating opportunities, Emery Thompson noted.

“In our study, male chimpanzees with high rank had higher cortisol levels, which is the opposite of the pattern in humans where high status is less stressful. But, high-ranking chimpanzee males expend a lot of energy in status displays and engage in high rates of aggression. We also found that male chimpanzees had higher cortisol when there was a sexually receptive female present. Females get large swellings of their genital skin for 10 to 12 days around the time of ovulation, and this instigates a lot of competition among the males.”

The males aren’t the only ones stressing during this time.

“We also found that this was stressful for the females being competed over, as males not only fight with each other, but intimidate and harass the females. Females with swellings often have males bugging them all day long, so they also don't get to feed as much.”

In many primate studies, seasonal food shortages are stressful, as are periods when females are nursing young infants, because their energetic demands increase.

“However, we did not find that here. Kibale National Park is a high-quality habitat for chimpanzees, and the area we work in has improved over the 30 years of the project because the forest, which was previously logged, has regenerated,” Emery Thompson said.

Researchers expected that older males would produce a higher cortisol response when competing for mates and status, but they did not, perhaps because older males pursue less risky behaviors. They had also expected that high cortisol would indicate an increased cost of nursing infants for older females, because this is so energetically taxing. Again, this was not the case. Instead, females produced the most cortisol when they were sexually receptive, a time when they are exposed to a lot of aggression, both attacked by males and are near a lot of males competing over them. This effect did increase with age. Older females experienced disproportionately more stress when they were sexually receptive.

“Taken together, our results indicate that dysregulation in production of cortisol is a common pathway for aging in both humans and chimpanzees. This suggests that humans inherited this feature, and it is neither a byproduct of our extended lifespans nor our unusual modern environments. What is not yet clear is whether humans and chimpanzees differ in the effects of cortisol on age-related disease. We are currently examining a number of other features of aging such as immune function, physical frailty, social behavior, and fertility to try to build a cohesive picture of chimpanzee aging,” Emery Thompson explained.

Despite collecting the chimp’s urine every day, researchers maintain their distance from them, unlike the renowned primatologist and anthropologist Jane Goodall, who is often portrayed in photos and documentaries interacting and even hugging the chimps.

“In fact, no field studies do that anymore. We maintain a distance of at least 15 feet from the chimpanzees at all times. Because we are interested in their natural behavior, our goal is that they go about their business without interacting with or worrying about us. We also do that for the chimpanzees' protection. Cold and flu viruses from humans are extremely dangerous for great apes because they are closely enough related to us that the same viruses infect them, but they do not have acquired immunity to these viruses, so they have a high risk of death if infected. We have largely suspended research activities in light of COVID-19,” Emery Thompson noted.

One of the biggest limitations the research team faces is that they are studying an endangered species in the wild, meaning that everything they do has to be non-invasive.

“We cannot weigh animals, conduct direct exams, or collect blood samples. And since the animals are not in cages, we have to go out and find them every day, and if they die, we may never locate them. This means we have very little understanding of how older chimpanzees die. On the other hand, it is clear that aging is affected by the environment and by lifestyle, so it is essential to understand how a species ages 'naturally' in the kind of environment in which it normally lives. Our study necessarily involves fewer subjects than a typical human clinical study, but it features much more comprehensive sampling of individuals, both for cortisol and for features of the social and physical environment.”

Like much of the rest of the world, the researchers are isolating from the world, including the chimpanzees.

“Uganda is now closed off due to COVID-19, so all of our foreign researchers have gone home. I typically visit one or two times a year, as do my fellow co-directors, including Martin Muller. Our Ph.D. students conduct field research for longer stints, typically six to 18 months,” Emery Thompson said.

The chimpanzee study will bring new insight into aging in humans, she concluded.

“Most research on aging is targeted either at curing the diseases of aging, such as heart disease, or treats aging itself as a disease. We are addressing an underdeveloped area of research on the basic biology of aging. While this might not lead to extension of the human lifespan, understanding how our aging pattern evolved can help us to figure out how to age more successfully. This is just one piece of the puzzle, but we are interested in sorting out which features of aging humans have in common with our closest relatives, which are unique to humans and their extended lifespan, and which are unnatural products of living in industrialized environments.”