The race is on. Children spend more of their time in classrooms and participating in organized activities than any other generation. As part of this frantic feat, Americans are spending around $7 billion annually on supplemental education to ensure their children do well on the highly competitive education circuit. What researchers at UNM have found is if parents can’t get along with each other, then all this conditioning is moot.

“We look at family stressors such as marital aggression—parents that fight, verbally and physically,” says College of Education Family Studies Professor Ryan Kelly. “It’s really common, so we are looking into how it impacts the children.”

Kelly’s research looks at many of the issues that affect marriage such as arguments over finances, problem drinking, mental health problems like depression or anxiety, and the physical relationship they have with each other including the children.

What Kelly and others noticed, is that all of these typical relationship interactions created a stressful environment for children. When looking at eight year-olds through 16 year-old children, the research indicated that when children are exposed to one or more of these stress related issues they don’t sleep well.

"Parents need to know arguing in harsh ways disrupts the development of their children. Heavy alcohol use is also discouraged because it can make a child feel unsafe."  —Professor Ryan Kelly

“They become vigilant at detecting a level of threat,” says Kelly. “The child starts to worry about a particular parent, their own personal safety or the safety of their siblings. These specific worries are what interrupts the child’s ability to sleep.”

Familial stressors are causing children to wake dozens of times a night. They might be in bed for nine hours, but are only getting an estimated six hours of sleep.

“In turn these children are tired during the day. They don’t do well at school. They show symptoms of anxiety and depression because of sleep problems. Beyond that, family stress creates long-term problems,” says Kelly.

Some of the side-effects from not sleeping well include trouble with standardize tests and issues with academic functions resulting in lower grades. Research also indicates that children will show symptoms of depression and anxiety in addition to an increased body mass index (BMI).

“Surprisingly, these issues are related to slight sleep disruptions. We’re not talking about sleep insomnia,” says Kelly. “We’re talking about an hour here and there. We noticed just a slight disruption, missing out on just 30 minutes of sleep per night, will inhibit daytime function.” 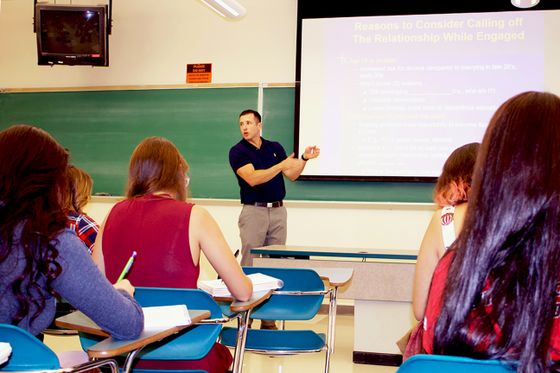 According to Professor Kelly, the National Sleep Foundation recommends that school age children get nine to 11 hours of sleep a night for optimal health and daytime function.

Kelly’s research also looked at the lasting effects of stress on sleep. It shows a nine year-old who experienced familial stress at one point has the potential to experience sleep issues years later due to a lasting view of the family dynamic as stressful.

“We see 15 year-olds who were exposed to family stress at nine who still have robust sleeping problems,” said Kelly. “There are interventions that parents can do to decrease family stress ultimately protecting the sleep of their children. Parents need to know arguing in harsh ways disrupts the development of their children. Heavy alcohol use is also discouraged because it can make a child feel unsafe.”

Kelly advises parents that the single largest thing they can do—in addition to maintaining a clam, safe environment—is give children a consistent sleep schedule. Children need to go to bed every night at the same time, or with a 30-minute timeframe of that time period. The same applies for morning wake time as well.

“The National Sleep Foundation recommends that school age children get nine to 11 hours of sleep a night,” says Kelly. “You can determine if your child is getting enough sleep by whether or not they have to wake-up with an alarm each morning and are groggy. If they are getting enough sleep they will wake-up on their own or feel ready to go once they are awakened.”

No technology 30 to 60 minutes before bedtime is also key to better sleep for children. Bright screens prevent the release of melatonin, the hormone that supports sleep and wake cycles.

“Knowledge doesn’t necessarily change behavior,” said Kelly. "We know we really shouldn’t do it—argue, look at technology—but people still do. It really comes down to figuring out how to actively decrease family risk and stress. Mom and dad will sleep better, too."