It’s a problem of huge proportions affecting millions in the United States and worldwide. According to the National Institute on Alcohol Abuse and Alcoholism, alcohol use disorder (AUD) is defined as problem drinking that becomes severe. In the United States alone, it affects more than 17 million adults 18 and older according to studies released in 2012.

Broken down, AUD affects 11.2 million men and 5.7 million women. Additionally, nearly one million adolescents ages 12-17 were also diagnosed with an AUD. From a study conducted in 2010, the economic impact of AUD is a staggering $243 billion.

The problem is even more amplified in New Mexico, which has the highest alcohol-related death rate in the nation at 59.6 deaths per 100,000 population in 2014. That number is twice the national rate of 27.9 deaths per 100,000 in 2013 (most recent national data available). Alcohol-related death has increased in New Mexico, despite decreasing nationally.

Over the years there have been numerous studies investigating the effects of alcohol on the developing brain. However, what’s missing from those studies is research that examines the effects of continued heavy alcohol use on the brain in adulthood.

Now, new research conducted by The University of New Mexico and The Mind Research Network, that is supported by a five-year, $3.6 million National Institutes of Health (NIH) grant, will study the effects of the alcohol on the brain over time. The study is led by Department of Psychology Associate Professor Katie Witkiewitz and MRN Assistant Professor of Translational Neuroscience Eric Claus.

“We know a lot about the effects of alcohol on the developing brain,” said Witkiewitz whose research areas include clinical psychology and quantitative psychology. “We know a lot about heavy drinkers, who come to treatment, and what their brains look like at the beginning of treatment and after abstinence. We also have a little bit of information about college student binge drinking and the brain.”

According to the researchers, there has been intense study of pharmacological and psychosocial treatments for AUD, but more than 80 percent of individuals meeting criteria for an alcohol use disorder (AUD) never seek formal treatment for their drinking. Very little is known about how alcohol affects the brain over time in individuals who continue to drink heavily throughout adulthood.

The UNM Center on Alcoholism, Substance Abuse, and Addictions (CASAA) and the Mind Research Network (MRN) are seeking healthy individuals 22-55 years of age who are moderate to heavy drinkers for a study of how alcohol use affects brain functioning.

If you would like to be considered for the study, please call 505-633-4028 or email abqdrinq@mrn.org. Please mention “ABQ DRINQ Study.

“The goal of this area of research is to identify the key changes that occur both at the behavioral and neural levels as a result of heavy alcohol use,” Claus said. “Once these changes are identified, it may be possible to use new treatment techniques to improve functioning in the brain in order to supplement current treatment approaches.”

The overarching goals of the research grant, the first-of-its-kind, include:

Understand how brain functioning predicts future levels of alcohol use and thinking and emotional functioning “A primary goal is to determine whether or not continued heavy drinking has a deleterious effect on the brain or not, and to what extent if so, over an 18-month period of time” Witkiewitz said.

"We know a lot about the effects of alcohol on the developing brain. We know a lot about heavy drinkers, who come to treatment, and what their brains look like at the beginning of treatment and after abstinence. We also have a little bit of information about college student binge drinking and the brain." – Katie Witkiewicz

“This work will be important for identifying how the brain works in individuals that use different amounts of alcohol, and may provide key insights into brain networks that could be targeted with new treatments such as brain stimulation,” said Claus.

While the amount of behavioral/psychosocial research on alcohol use has increased over the past decade, there has been a notable absence of research examining the neurocognitive mechanisms that change with different levels of alcohol use. A significant body of animal and human work has investigated the neural correlates of the development and maintenance of AUDs, but there is a dearth of literature on the effects of alcohol on the brain as drinking increases or decreases over time. Cross-sectional research has found that networks involved in craving and reacting to stress appear to become more engaged with greater AUD severity, and those networks involved in mental functions such as planning and remembering tend to decrease with increased AUD severity.

“It could be expected that as drinking quantity/frequency and AUD severity decrease, there may be a reversal of these changes,” Witkiewitz said. “While some cross-sectional neuroimaging research suggests that recovery of function does occur after long-term abstinence, to date there is a lack of studies investigating change in functional brain response among those who continue to drink heavily or increase or decrease their heavy drinking over time.” 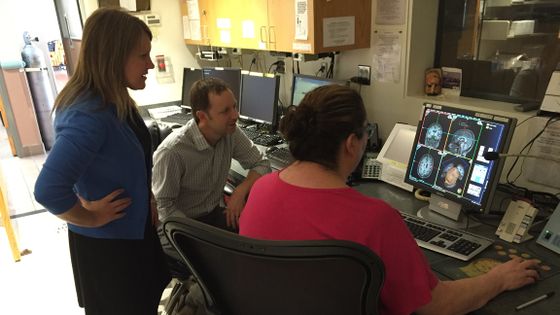 By using both fMRI and MEG, researchers can identify how the brain responds when people
make decisions or view pictures of images related to alcohol.

To address this gap, this research aims to examine individuals who report heavy drinking in a longitudinal design in order to study the psychosocial, behavioral, and neural mechanisms that underlie changes in or maintenance of heavy drinking. Multi-modal neuroimaging (functional magnetic resonance imaging (fMRI) and magnetoencephalography (MEG) will be used to identify the brain regions in which change occurs (i.e. fMRI), and how quickly brain regions come online during thinking and emotional reactions.

Both of these will be examined in relation to drinking levels to see how brain functioning changes with different levels of alcohol use. In addition to measuring brain activity, assessments of psychosocial and behavioral functioning will also be conducted at various points during the study including at the baseline, and also at 3-, 9-, and 18-month follow-ups.

“By using both fMRI and MEG, we’ll be able to identify how the brain responds when people make decisions or view pictures of images related to alcohol,” said Claus. “fMRI uses a large magnet to measure changes in the level of oxygen in blood throughout the brain, and this measurement will give us an idea of where the brain is most active. MEG, on the other hand, measures magnetic fields that are generated from populations of active neurons and gives us information about the timing of when brain regions come online.”

During each session, participants will complete computer tasks measuring thinking and emotional reactions to alcohol related pictures and stressful cues. Psychosocial, behavioral, and neural mechanisms of behavior change will be examined using state-of-the-art data analytic techniques, many of which have been pioneered by the research team.

“By examining how alcohol affects functioning at multiple levels of analysis in heavy drinkers, we will be able to develop a comprehensive understanding of potential mechanisms on which to focus future treatments for AUDs,” Witkiewitz said.