New research suggests the Northeastern coast of the United States could be struck by more frequent and more powerful hurricanes in the future due to shifting weather patterns caused by manmade industrial emissions.

A new collaborative study, led by researchers at Durham University, UK, and The University of New Mexico and published in the journal Scientific Reports and titled "Persistent northward North Atlantic tropical cyclone track migration over the past five centuries," found hurricanes have gradually moved north from the western Caribbean towards North America over the past several hundred years,

The researchers, including co-authors Lisa and James Baldini from Durham University and Professors Yemane Asmerom and Keith Prufer from UNM, suggest the change in the hurricane track is caused by the expansion of atmospheric circulation belts driven by increasing carbon dioxide emissions.

Major cities along the Northeast coast could come under increased threat from these severe storms and need to be better prepared for their potential impact, the researchers said.

The researchers reconstructed hurricane rainfall for the western Caribbean dating back 450 years by analyzing the chemical composition of a stalagmite collected from Yok Balum a cave in southern Belize, Central America.

They found that the average number of hurricanes at the Belize site decreased during that time. When combined with other data from places such as Bermuda and Florida, this information showed that hurricanes were moving north rather than decreasing in total number across the North Atlantic.

Although natural warming over the centuries has had some impact on shifting hurricane tracks, the researchers found a marked decrease in hurricane activity in the western Caribbean coinciding with the late 19th Century industrial boom associated with increasing carbon dioxide and sulphate aerosol emissions into the atmosphere.

The researchers said that cooling of the Northern Hemisphere due to increased industrial aerosol emissions should have pushed the hurricane tracks southward since Industrialization. 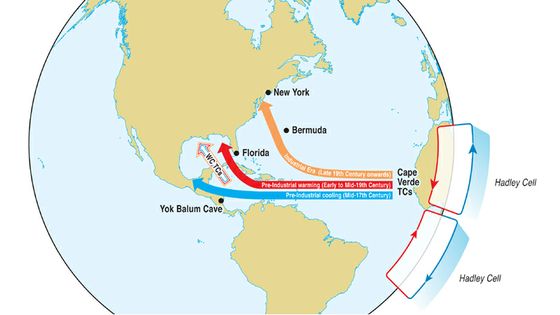 The researchers reconstructed hurricane rainfall for the western Caribbean
dating back 450 years to develop a hurricane track map.

“We are able to show changing storm trajectories that correlate with anthropogenic influences on climate systems since the industrial revolution,” said Asmerom, a professor in UNM’s Department of Earth and Planetary Sciences. “This is facilitated by two important analytical aspects of the project: the development of a proxy for tropical cyclone (hurricane) events in the past using very high resolution carbon and oxygen isotope records, matched by few other such records derived from a tropical stalagmite and the incredibly precise age model.”

Asmerom and Research Scientist Victor Polyak developed the age model at UNM, with assistance from graduate student Valorie Aquino for the international and interdisciplinary research program at Yok Balum cave, initiated and coordinated by Prufer for more than a decade.

They added that rising amounts of atmospheric carbon dioxide had overridden this effect by expanding the Hadley cell - a pattern of circulating air in the Earth’s tropical belt - pushing hurricane tracks further north, away from the western Caribbean towards the Northeastern USA.

This suggests that from the late 19th Century manmade emissions have become the main driver behind shifting hurricane tracks by altering the position of global weather systems. If future carbon dioxide and industrial aerosol emissions trends continue as expected, hurricanes could shift even further northward, exacerbating the risk to the Northeast U.S. coast.

In 2012, Hurricane Sandy struck the Caribbean and much of the eastern seaboard of the United States, stretching as far north as Canada. At least 233 people died as a result of the storm.

“Our research shows that the hurricane risk to the Northeastern coast of the United States is increasing as hurricanes track further north,” said lead author Lisa Baldini, Department of Geography, Durham University. “Since the 19th Century this shift was largely driven by man-made emissions and if emissions continue as expected this will result in more frequent and powerful storms.” 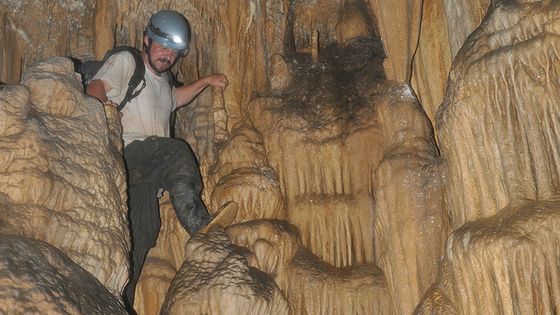 UNM Professor Keith Prufer has led an international and interdisciplinary research program
at Yok Balum cave for more than a decade.

The research was funded by the European Research Council; the National Science Foundation; the Alphawood Foundation; the Schweizer National Fund, Sinergia; and the Inter-American Institute for Global Change Research.

“This is the third major story to come from our highly collaborative research at Yok Balum cave, where I have held a research permit for over a decade,” said Prufer, a professor in UNM’s Anthropology Department.

The first was an archaeological paper looking at the role of climate change in the development and disintegration of the great Maya cities of the Classic Period (400 BC – 1100 AD), published in Science (2012).  The second examined the role of sulfite emissions from volcanoes (pre-industrial) and then industrialization (throughout the 20th century) as contributing to distinct drying trends in part of Central America influenced by the Inter Tropical Convergence Zone (ITCZ), published in Nature Geoscience (2015).

“All of these papers illustrate the real value and contributions of collaborative research focusing on human-environmental dynamics, and relevance of this work to both understanding human adaptation in the past and ways to predict how humans may respond to some of the challenges we face in the present and future,” said Prufer.

“Projects from these collaborations have resulted in major research funding here in the US and Europe with very highly visible papers,” added Asmerom.