It’s been more than 35 years since the last major eruption of Mount St. Helens. Since that blast, much research has been conducted with scientists learning a great deal about one of the most active volcanoes within the Cascade arc, a north-south chain of volcanoes in the Pacific Northwest that formed above the subducting Juan de Fuca plate.

Mount St. Helens is known as a composite volcano or stratovolcano, a term for steep-sided symmetrical cones that are constructed of alternating layers of lava flows, ash and other volcanic debris. Composite volcanoes tend to erupt more explosively and pose considerable danger to nearby life and property such as Mount St. Helens did in the 1980 eruption. Its location, however, is unusual because it lies approximately 30 miles due west of Mount Adams and the main axis of arc volcanism.

Much has been learned since that eruption. Petrologic and geophysical research at Mount St. Helens that suggests most of the eruptive products were derived from one or more upper-crustal magma chambers located from depths of three to 12 kilometers (approximately two to 7 miles).

Volcanic eruptions are caused by magma, a mixture of liquid rock, crystals and dissolved gases. Arc magmas are the end result of complex series of processes involving the interaction between the overlying crust and melts that ascend from the mantle wedge source region.

“The melt that supplies Mount St. Helens is probably formed to the east in the mantle wedge below Mount Adams and then moves west through the magmatic system.” – Steven Hansen, UNM postdoctoral researcher

Despite the previous research, the structure of the deep magmatic plumbing system beneath Mount St. Helens and its context within the broader Cascadia subduction system remain poorly resolved despite the genetic link between subduction and arc volcanism.

Recently, researchers including postdoctoral researcher Steven Hansen, along with mentor and Assistant Professor Brandon Schmandt at The University of New Mexico, have been searching for additional answers surrounding the magmatic system of Mount St. Helens as part of a multi-year collaborative research project involving several institutions.

The overarching goal of the research, released today in Nature Communications, is to illuminate the architecture of the greater Mount St. Helens magmatic system from slab to surface. 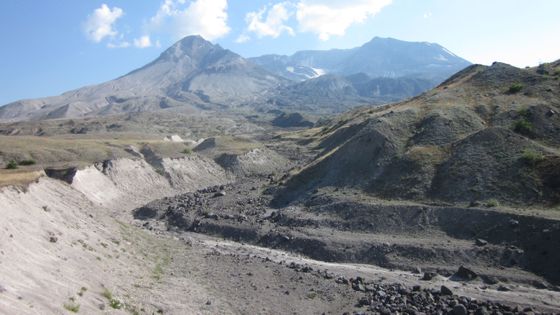 Looking into the summit crater from the north side, along one of the many canyons that have managed to carve their way into the 1980 eruption deposits.

“Thermal models of the subduction zone indicate the down-going slab is decoupled from the overriding mantle wedge beneath the forearc,” said Hansen. “This results in a cold mantle wedge that is unlikely to generate melt. Given the unusual location of Mount St Helens, we think that this raises questions regarding the extent of the cold mantle wedge and the source region of melts that are ultimately responsible for volcanism.”

In an ambitious attempt to constrain the deep structure of the crust and mantle below Mount St. Helens, which has proven tough to resolve in previous seismic studies, the researchers, along with a handful of students from the collaborating institutions, conducted a large-scale, active-source seismic experiment as part of the iMUSH collaboration to determine where the melt is located in the subsurface and where it is sourced from.

Hiking more than 20 miles a day while carrying up to 12, five-pound seismic sensors at a time, the group deployed an array consisting of 900 autonomous seismometers all within 15 kilometers of the Mount St. Helens summit crater. Active source explosions followed to create seismic energy similar to that produced by small 2.0 magnitude earthquakes. 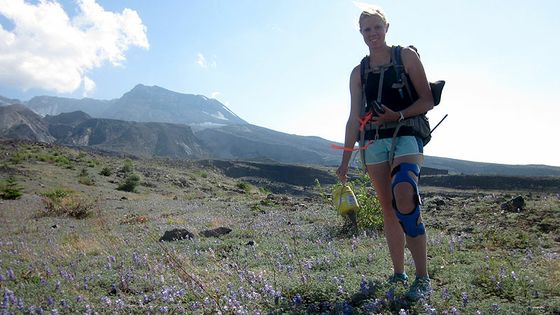 Samantha Cafferkey removing a seismometer near Loowit Falls during the array demobilization.

“All sensors were deployed along the road and trail system at Mount St. Helens with an average spacing of 250 meters,” said Hansen. “After deploying the seismometers, 23 active source explosions were conducted by the Rice group, headed by Alan Levander and Eric Kiser.”

The resulting tremors were recorded by three arrays of vertical-component geophones deployed in two phases which together contained about 4,800 individual channels. The resulting dataset provides a unique opportunity for high-resolution seismic imaging of deep crustal structure beneath this active arc volcano.

“Using high-resolution active-source seismic data, we show that Mount St. Helens sits atop a sharp lateral boundary in Moho reflectivity,” Hansen said. “Weak-to-absent PmP reflections to the west are attributed to serpentine in the mantle-wedge, which requires a cold hydrated mantle wedge beneath Mount St. Helens (<~700°C).” These results suggest that the melt source region lies east towards Mount Adams where there are strong reflections “There’s a stark contrast across Mount St. Helens. In the west, it’s weak or non-existent.” 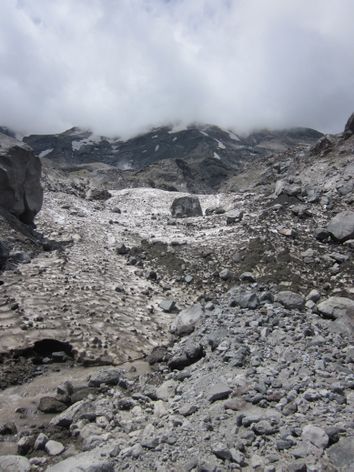 Looking up at Mount St. Helens from the Loowit Trail. A snowfield near the Shoestring Glacier.

The change in reflectivity is interpreted as low-velocity serpentine in the mantle wedge which requires cold temperatures and thus inhibits melting. The ocean (to the west) adds water to the subduction zone where fluids that drive volcanism are released from the subducting slab. The subducting slab is inherently cold (because it starts at the surface) and slowly warms as it subducts into the hotter mantle. As this happens, water is released from the slab and this water then rises towards the surface and interacts with the overlying mantle wedge.

Where the mantle wedge is cold (<700C, forearc), this water can form serpentine instead of causing melting. This is why finding serpentine in the wedge below Mount St. Helens is so interesting, because we know that melt is making it to the surface there.

“The research suggests the cold mantle wedge extends to Mount St. Helens. The subduction trench is where the plate goes down, which is about 170 miles west of Mount St. Helens,” said Hansen. “The melt that supplies Mount St. Helens is probably formed to the east in the mantle wedge below Mount Adams and then moves west through the magmatic system somehow.” 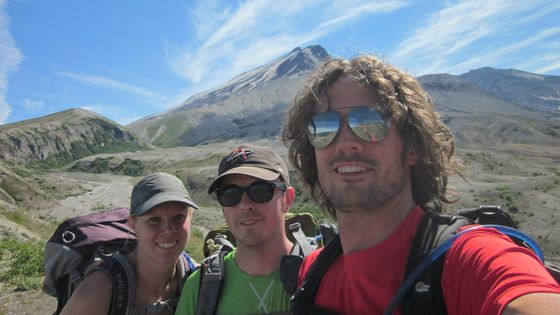 (l. to r.): Samantha Cafferkey, Tyler Grambling and Steve Hansen far from the Lava Canyon trailhead,
but enjoying their work.

“This adds to a variety of other experiments that suggest that where it's cold this water is basically getting soaked into the mantle and turning into serpentine and not going anywhere, so it can't get up into the crust to form volcanoes,” said Creager. “When you get up into where there is olivine the temperature is hotter, serpentine isn't stable, so the water can play its role in the volcanic process.”

The location of the volcanic arc relative to the trench is thought to be controlled by the thermal structure of the mantle wedge, which presents a thermal paradox for Mount St. Helens because it lies directly adjacent to the cold mantle wedge and yet still produces arc derived magmatism which requires elevated temperatures.

“It is important to note that we have just finished collecting all of the different types of geophysical data associated with the iMUSH experiment and that these data will provide important additional constraints on the deep structure at Mount St. Helens,” said Hansen.