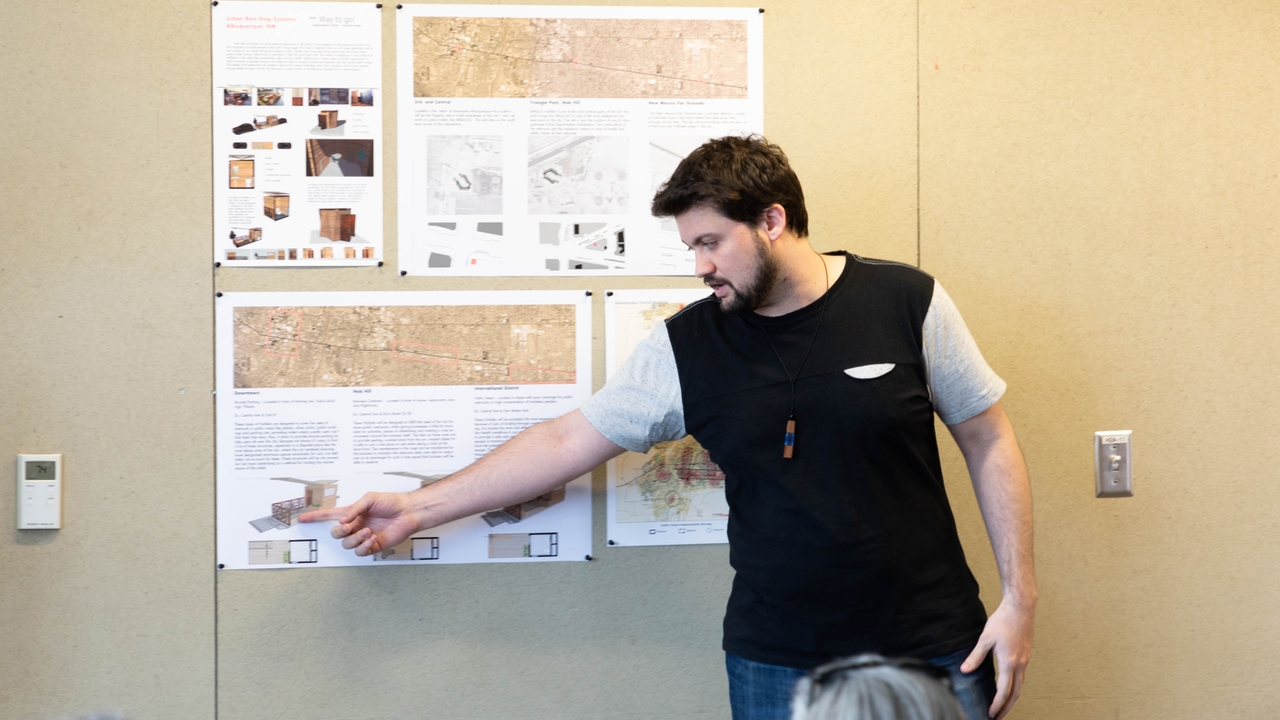 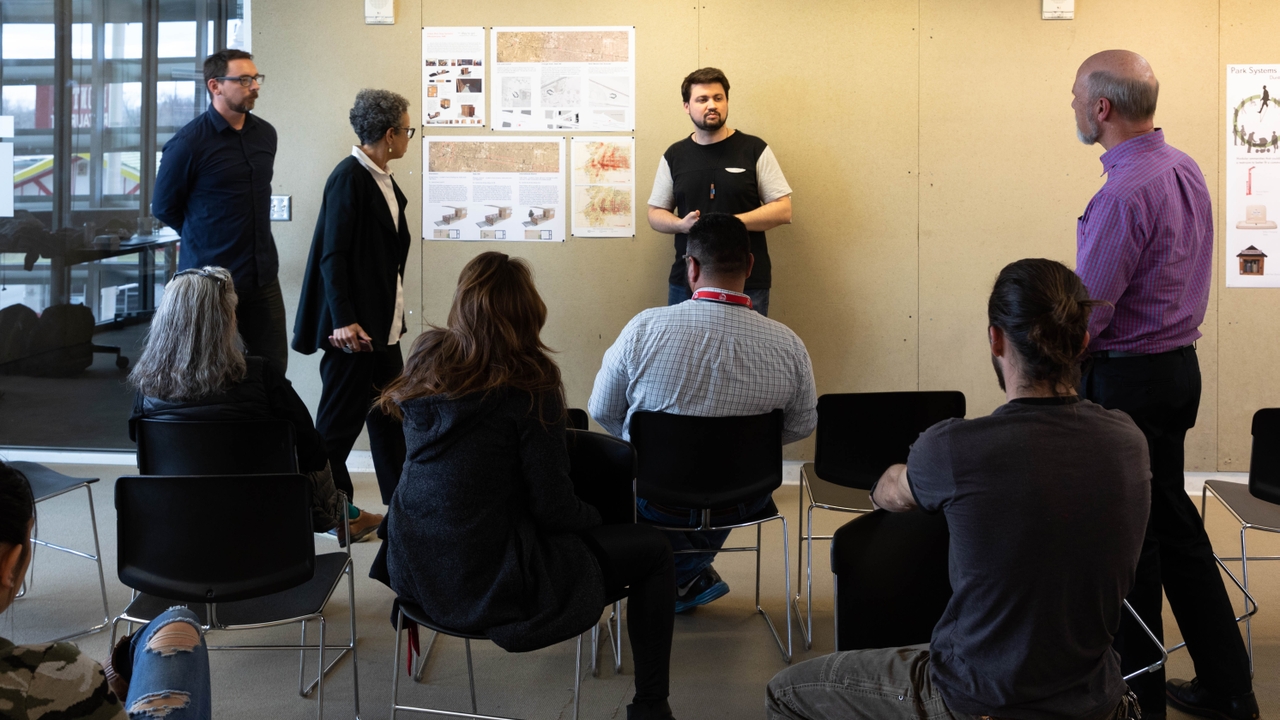 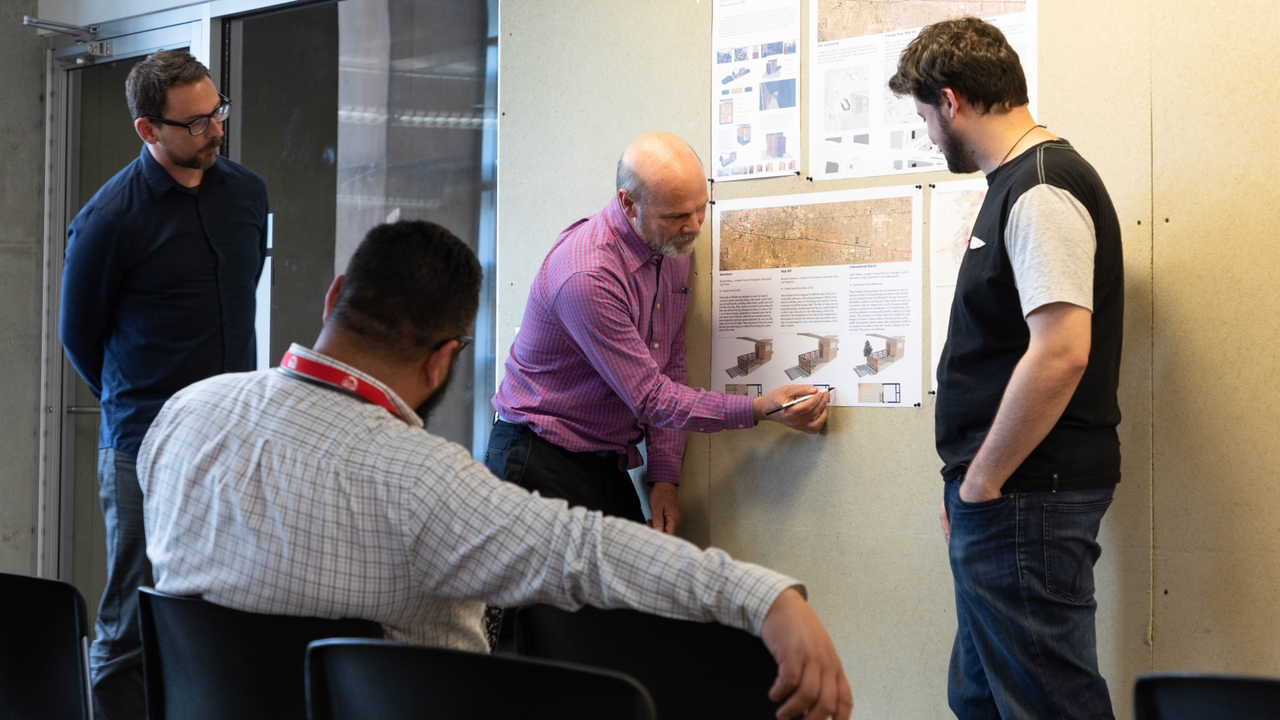 University of New Mexico students are working to bring dignity back to homeless people in Albuquerque.

To those who have a consistent place to hang their hat, using the facilities might be a given luxury. But to people who call the streets of Albuquerque home, finding a suitable place to go to the bathroom or perform personal hygiene is a struggle. Working in collaboration with the City of Albuquerque and the UNM School of Medicine, graduate students in UNM’s School of Architecture and Planning (SA&P) are developing ways public restrooms can be better incorporated and utilized around public parks.

“Going to the bathroom is something everyone does,” – Michaele Pride, UNM SA&P professor

The collaboration was first born out of the UNM HIVE network – an acronym that stands for Health Inclusion Vibrancy and Equity. HIVE is a cross-campus community collaborative of faculty, students and staff dedicated to addressing social determinants of health. The network is comprised of between 130 and 150 local professionals in medicine public health, education, business, law, architecture and planning. SA&P Professor Michaele Pride is part of the HIVE, and says it’s becoming an instrumental way of connecting local resources with innovative projects.

“We just recently reconceived ourselves as a learning community, a community of practice and a network of support for projects that pursue those goals,” Pride said. “So when projects flag our attention as ones that could possibly benefit from HIVE connections, we reach into the network and find people who have the expertise, background and interest to help a community address the issue that they’re facing.”

HIVE is heralded by Art Kaufman, professor and vice chancellor for community health at UNM HSC, and Geraldine Forbes Isais, dean of SA&P, among others. It brings together resources from across the state to address problems in the community – the most recent of which looks at the issue of public restrooms. During the early stages of UNM and the City of Albuquerque discussing a partnership focusing on ways to address homelessness, Kaufman presented the problem to the HIVE.

“Real community problems are complex and need collaboration across disciplines,” Pride said. “And the issue of homelessness is one of those complex, intractable, wicked problems that this UNM administration has decided to put in the forefront of its priorities.”

Through conversations with the city, HIVE members began discussing a problem occurring at Coronado Park, and other parks around the city that are gathering places for Albuquerque homeless. Coronado Park, at Second Street and I-25, is the pick-up and drop off location for homeless people staying in the Westside Emergency Shelter and has a consistent problem of built up human feces because there are no public restroom facilities in the area.

“This is an issue of treating people with dignity, regardless of their circumstances,” Pride said. “Toilets are an important component of dignity, but there is also a public health component that is essential for us to address.”

According to the World Health Organization, poor sanitation is linked to transmission of diseases such as cholera, diarrhea, dysentery, hepatitis A, typhoid and polio. In places where people are forced to defecate openly, the WHO has linked a vicious cycle of disease and poverty to poor public sanitation. Although portable toilets were placed at Coronado Park briefly, they were removed after being labelled biohazardous.

“We heard that and thought, ‘this sounds like a design problem,’” Pride said.

Enter DPAC, the SA&P Design and Planning Assistance Program and second oldest, continually operating community design centers based in a public university. During its 50-year history, DPAC has completed approximately 2000 projects, serving hundreds of communities—large and small—in every county of New Mexico.

“It allows students to work with stakeholders and also potentially provides service to stakeholders,” said Mark Childs, SA&P professor and associate dean of research. “They work in multidisciplinary teams to create innovative solutions to problems like this one – the need for public restrooms.”

Working with the City of Albuquerque, UNM DPAC graduate students in architecture and landscape architecture are developing a wide range of approaches to solving the problem, while also considering issues of sanitation, public health, safety, dignity, accessibility, environmental stewardship and beauty. Through collaborative brainstorming sessions, the seven teams came up with 140 ideas, which they then worked with stakeholders –i.e. police/fire/city officials and councilors– to whittle down to seven concepts.

“Those seven range from ideas of making the toilet an art piece, to using the space under the Interstate underpass as a health clinic and water treatment area,” Childs said. “And using the captured water, homeless people could grow flowers that they could then sell. So, the ideas cover a multitude of solutions to a very multifaceted problem.”

In addition, a Sculptural Infrastructure class in UNM College of Fine Art is working on a parallel project which assesses the intersection of public toilets and public art.

The SA&P student’s plans are drawn up and now the next step is to turn the developed options over to the city to consider. That hand-off will happen at an event held in UNM’s George Pearl Hall Monday, March 18 from 3 to 6 p.m., during which students will present their developed ideas to stakeholders.

“Our intent with the stakeholders is to inform and enrich the conversation and decision-making around this issue,” Pride concluded.

“And our intent is to give our students a great opportunity to learn to work with communities on difficult but critical problems," added Childs. “Projects like this one create excellent opportunities for education, exploration and innovation in a studio setting that directly impacts a real-world problem.”