STC.UNM ended its fiscal year in strong fashion by exceeding targeted goals in nearly all metrics, an indication that the program’s maturity is “paying off” in robust commercialization activity and deepening ties with our entrepreneurial business community.

Option and license agreements for FY2013 (63) led with the highest percentage increase, exceeding their goal by 210 percent, followed by new start-up companies formed from UNM technology at 180 percent of goal.  Combined license and patent cost reimbursement income ($2.19 million) reached 100 percent of goal.  Disclosures of new technologies surpassed its goal by 120 percent.  Of the total 138 disclosed technologies in FY2013, 26 of the 84 lead inventors, or 31 percent, were first-time inventors.  STC filed patent applications on 80 of its disclosures in 2013.  The number of issued patents for UNM technology also rose from 31 in 2012 to 51 in 2013.

“With the beginning of the fall academic semester and the return of faculty and students, STC looks forward to a year of innovative discoveries and Rainforest collaborations with our UNM research community. Our university inventors are the primary drivers of innovation not only in the U. S. economy but regionally and locally as well.  They are key players in building the innovation ecosystem in New Mexico,” stated STC CEO & Chief Economic Development Officer Lisa Kuuttila.

STC’s sustainable commercialization pipeline for UNM’s innovative technologies is more good news for the Innovate ABQ initiative.  UNM and its partners in New Mexico’s government, education and business communities have been working together on this initiative to create a research and innovation district in the Albuquerque metro area that will the foundation for an innovation economy in New Mexico.  Visit STC  for more information on its start-up companies and Innovate ABQ. 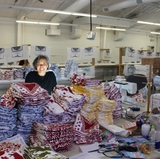