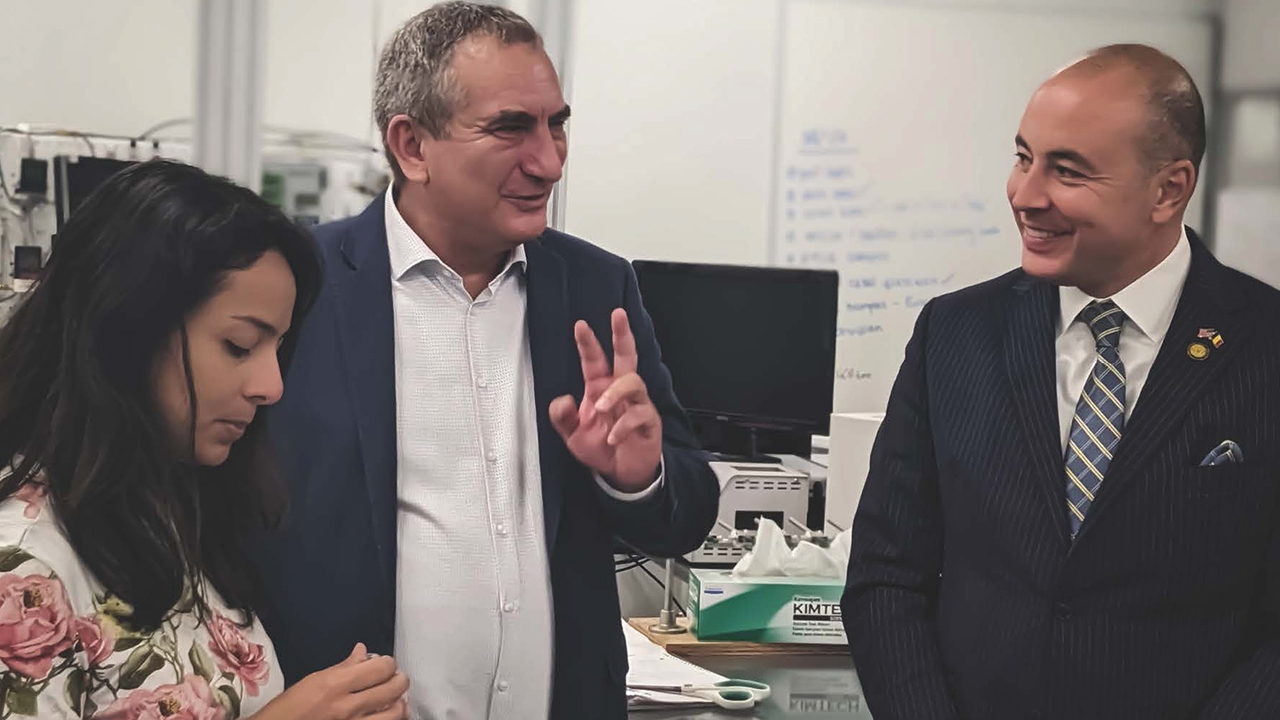 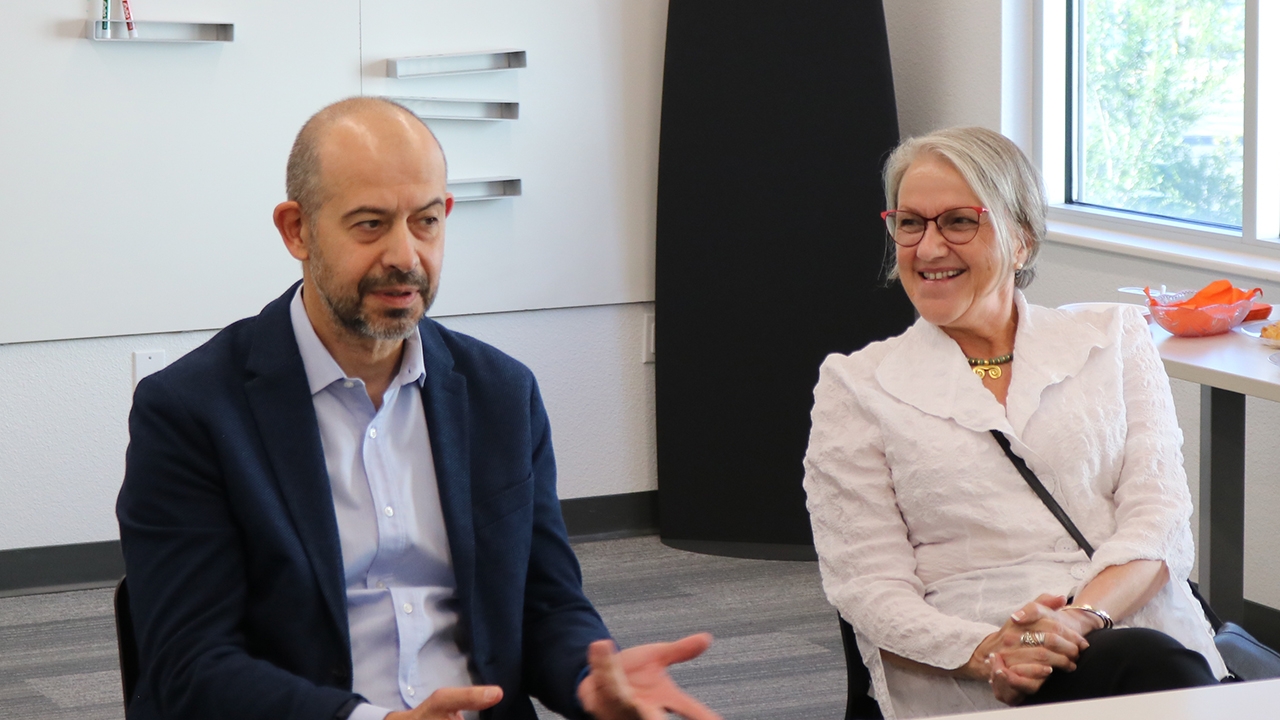 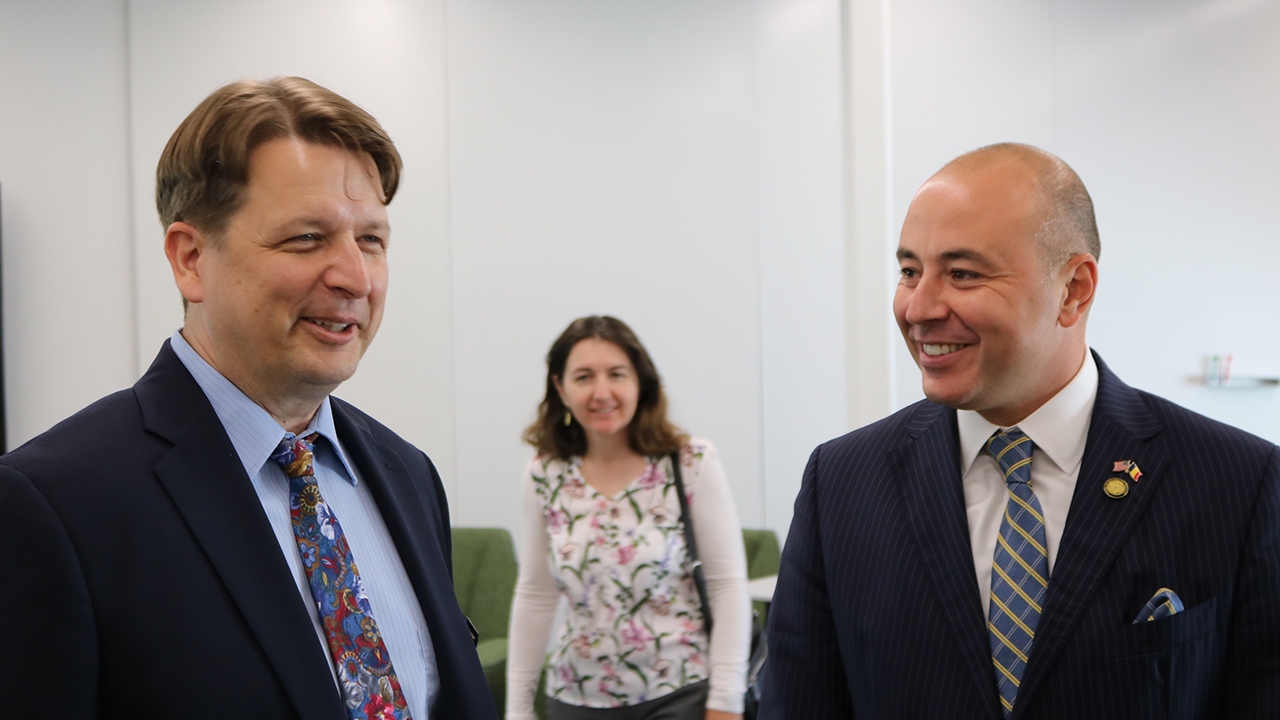 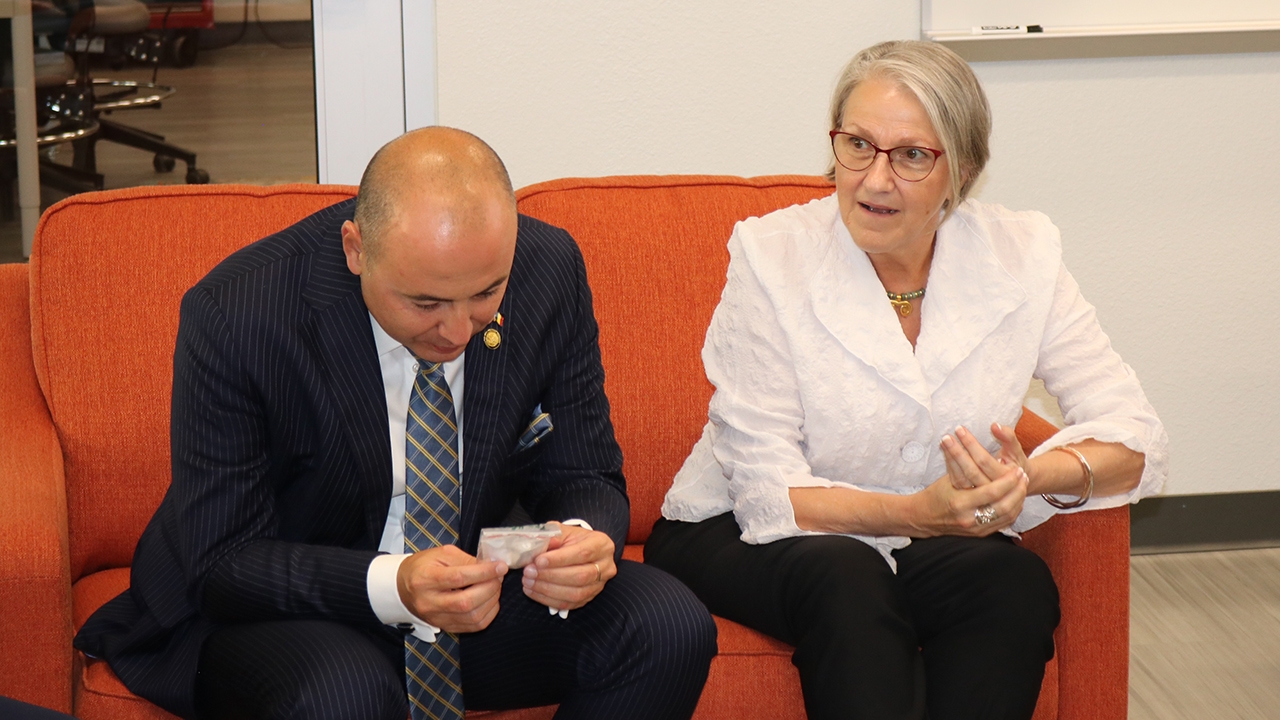 Andrei Muraru examines a sample from the Center of Stable Isotopes. 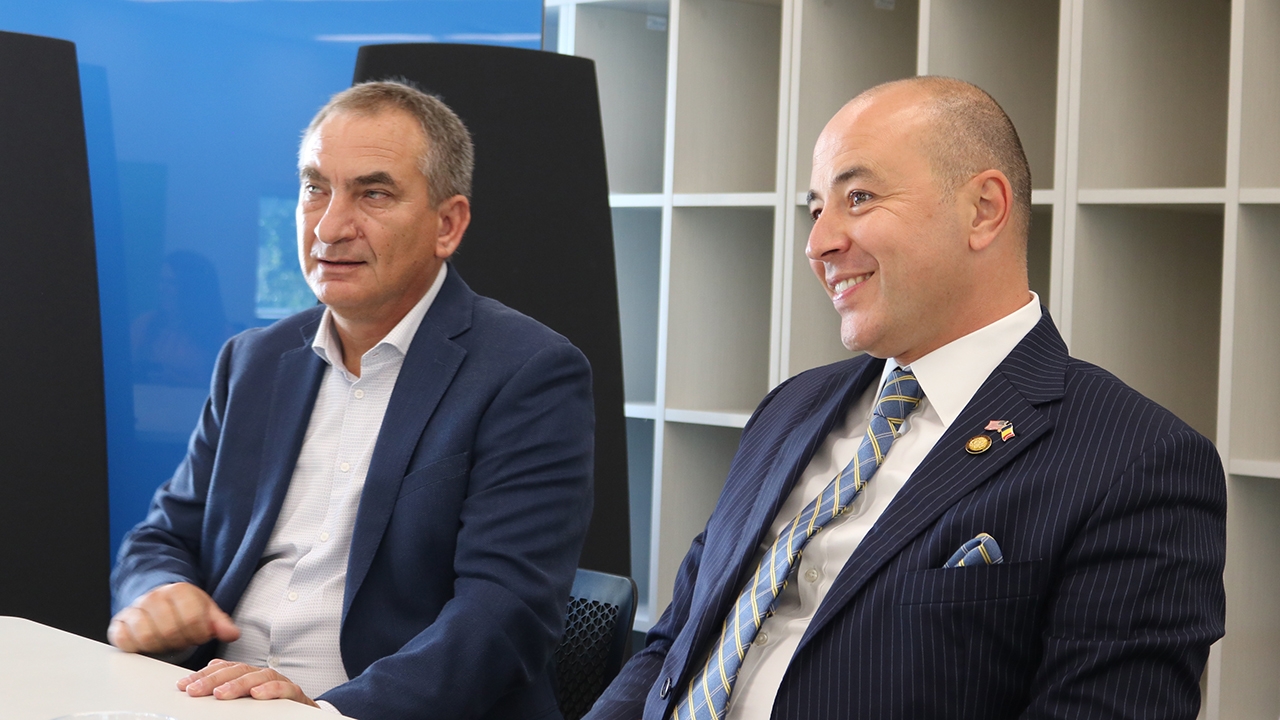 Romanian Ambassador visits the UNM Center for Stable Isotopes as part of '50 States, One Community' Tour

Recently, the Center for Stable Isotopes (CSI) at The University of New Mexico welcomed a very special visitor to its lab in the Physics & Astronomy and Interdisciplinary Science (PAÍS) building. Andrei Muraru, the Romanian Ambassador to the United States stopped off at CSI during his trip to New Mexico as part of his “50 States, One Community” tour.

During his three-hour visit to PAÍS, Ambassador Muraru learned about CSI’s collaborations with Romania and planted the seeds for new scientific connections between the two countries.

Appointed in July of 2021, Ambassador Muraru and his staff began their “50 States, One Community” tour in October of that same year in an effort to connect with the Romanian communities in each state within the U.S. During his three-day stop in New Mexico, Ambassador Muraru met with Romanian constituents at UNM, including CSI.

Viorel Atudorei, CSI’s facilities director, was contacted by Ioana Engstrom, an American-Romanian business woman who organized the Ambassador’s visit, and asked if Atudorei could meet with the Ambassador.

As a Romanian-American himself, Atudorei was honored to invite the Ambassador into PAÍS. “I gladly accepted and I offered to show him the CSI labs and talk to him about pilot research projects with Romanian academic institutions.” Atudorei said.

Atudorei and Engstrom were two of five Romanian-American community members invited to join the Ambassador at PAÍS. Tudor Oprea, Professor Emeritus of Internal Medicine, Division of Translational Informatics; Diana Dragomir, assistant professor of the Department of Physics & Astronomy; and Emil Ardelean, owner of Acme Solutions, and adjunct research professor in the Department of Mechanical Engineering at UNM.

During the Ambassador’s visit, Engstrom was offered the position of Honorary Consul of Romania in New Mexico.

Joining them were representatives from UNM’s leadership, including Assistant Vice President for Research, Dave Hanson; Associate Dean for Research at the College of Arts & Sciences, Chris Lippitt; Professor and Faculty Coordinator of the Interdisciplinary Science Cooperative, Jeffrey Rack; and Chair and Professor of Physics & Astronomy, Rich Rand.

During his visit to CSI’s labs in PAÍS, Atudorei toured Ambassador Muraru and his staff through their space, and shared the pilot projects they are working on with National Museum of History of Romania and the Vasile Pârvan Institute of Archaeology.

Atudorei described the impact of the Ambassador’s visit by saying, “Personally, I was honored to have the opportunity to show the Ambassador the CSI facilities and to talk to him about research projects underway with Romanian counterparts.

The Ambassador’s visit opened tangible opportunities for collaborations with Romanian academic institutions, as the Ambassador’s vision is to add a cultural and scientific exchanges to the 25 years long Strategic US-Romania Partnership - presently limited to military and economic issues. “Overall, I was impressed by his genuine drive to meet new people and the time he took to talk to various members of UNM community,” Atudorei said.

During his visit, Ambassador Muraru declared, “In the first 25 years, the Strategic Partnership was a vector of Romania's integration into the transatlantic security space and the consolidation of democratic values, and in its next stage it can be a vector of economic development and the consolidation of a strong regional profile. And I am convinced that many of you, given your professional profile, can contribute enormously to the development of this prosperity agenda.”

New Mexico was the ninth state that the Ambassador visited on his ambitious tour which has also led him to connect with Romanian communities in Ohio, Arizona, Minnesota, Michigan, Texas, Illinois, New Jersey, and Utah.

For CSI, the impact of this visit will extend far beyond the day that the Ambassador spent in their labs in PAÍS. Since then, additional discussions have been had between the Romanian Embassy and UNM about potential partnerships between UNM and Romanian universities, which will surely lead to greater scientific collaborations in the future.