Route 66 Fellow captures moment in time for the ‘Mother Road’

An archive of the historic, the mundane and the briefly memorable
By Karen Wentworth October 28, 2014
Categories: Latest News University Libraries

Donatella Davanzo, a University of New Mexico graduate student, walks along some part of Route 66 in Albuquerque almost every day, photographing the buildings, the street and the fragments of history still visible along the roadside.

Officially she is the Route 66 Fellow for the Center for Southwest Research at the UNM Libraries. Her job is to photograph every building of every block of Route 66 through Albuquerque. She is capturing the route as it looks in 2013-14 to save the view for future generations.

She has already walked every block from Tramway to Atrisco along Central Ave. methodically working from the mountains to the valley and out onto the mesa.

Central Ave. in Albuquerque is most days just a street to the people who drive, ride or walk along it. It’s easy to focus only on the problems of the moment. Why are there orange barrels and construction at the corner of Central and University? How do you avoid all the pedestrians in the Nob Hill area? When is someone going to fix the patched pavement at Central and Coors? 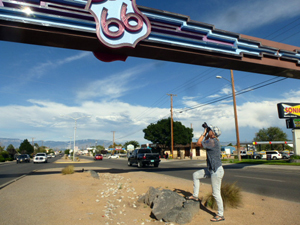 It’s very easy to forget the long history of the street and what it has meant to people who have traveled it and to people who have never been near it. Central Ave. through Albuquerque is the longest uninterrupted urban stretch of old Route 66, a small part of one of the first paved roads ever to cross the North American continent.

Davanzo thinks about it every day. To a young European woman growing up in Trieste, Italy in the 1970’s Route 66 meant an American way of life. Somehow the music, the motorcycles and the myth were all tied up together.

“The 1970’s in Europe were very difficult years,” Davanzo said. “That period in Italy was an intense period of socio-political turmoil, called the “years of lead” that lasted from the late 1960s into the early 1980s. So when we listened to the songs, it was a symbol of freedom. When we read writers like Jack Kerouac it was like an open door in another world.”

Davanzo, a Ph.D. student in American Studies and in the Historic Preservation and Regionalism program, came to New Mexico several times since the 1990s, and finally decided to live and complete her academic studies here.

Walking along the route, she thinks Albuquerque’s part of Route 66 is unique. “In Albuquerque you can watch the architecture of Route 66.  This is special because you have Pueblo style, Spanish style and Mexican style that creates a fascinating mix. This is a very special part of Route 66.” 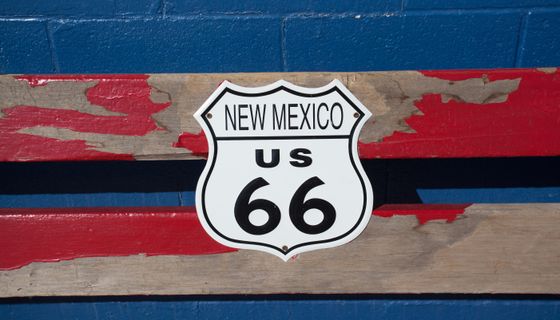 One of the many images along Route 66.

Central Ave. isn’t the myth. It’s the gritty reality. Davanzo says, “When you drive you have an image in your mind and you can travel with your fantasy at the same time you can just touch the reality. You can do both. You decide. What do you want to see in Route 66?”

One of the things that fascinate Davanzo is the way people use space and transform a natural landscape in a cultural place. In her photographs, you do not see people because the Route 66 project focuses on architectural features.

”The space talks for them,” Davanzo said. “If you pay attention to how people use their own space – you can see many things. You can see through the space, how people live.”

She cites Kelly’s, a restaurant and bar along Route 66, as one of the interesting examples of how people change the use of their space. “Kelly’s Restaurant was a gas station, and a mechanical place for the cars,” she said. “Now we have a restaurant. This is a very interesting example for me how people change. The space changes with the people. This is a very excellent example of how we can transform our space because our lifestyle and needs change over time." 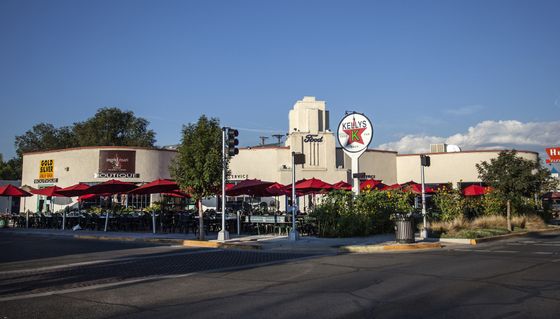 Kelly's, a restaurant and bar, is an example of how people change the use of their space.

Her photographs at the Center for Southwest Research are a record of how people in New Mexico relate to their space along the state’s most famous road.

CWSR Director Mike Kelly believes there is no other project like this in the U.S. He says, “The mundane will be important as examples of the vernacular architecture in 50 years. This snapshot of Route 66 in Albuquerque will document not just the historic buildings along the route but every building. Route 66 will change. We are trying to capture this moment in time as a historically important resource for future scholars.”

Take a trip on Route 66 in Albuquerque with Donatella Davanzo.

Davanzo is now photographing the north/south portion of Route 66. At one point in its history, it ran along 4th Street. She is currently working her way from downtown toward the northern end of Bernalillo County.

UNM is a founding member of the Route 66 Archives & Research Collaborative, which was developed by the National Park Service Route 66 Corridor Preservation Programs. ARC works with archival institutions along the route in order to stimulate the collecting and preservation of historical records and to increase their accessibility to the public. Davanzo’s fellowship is funded by the Center for Regional Studies.