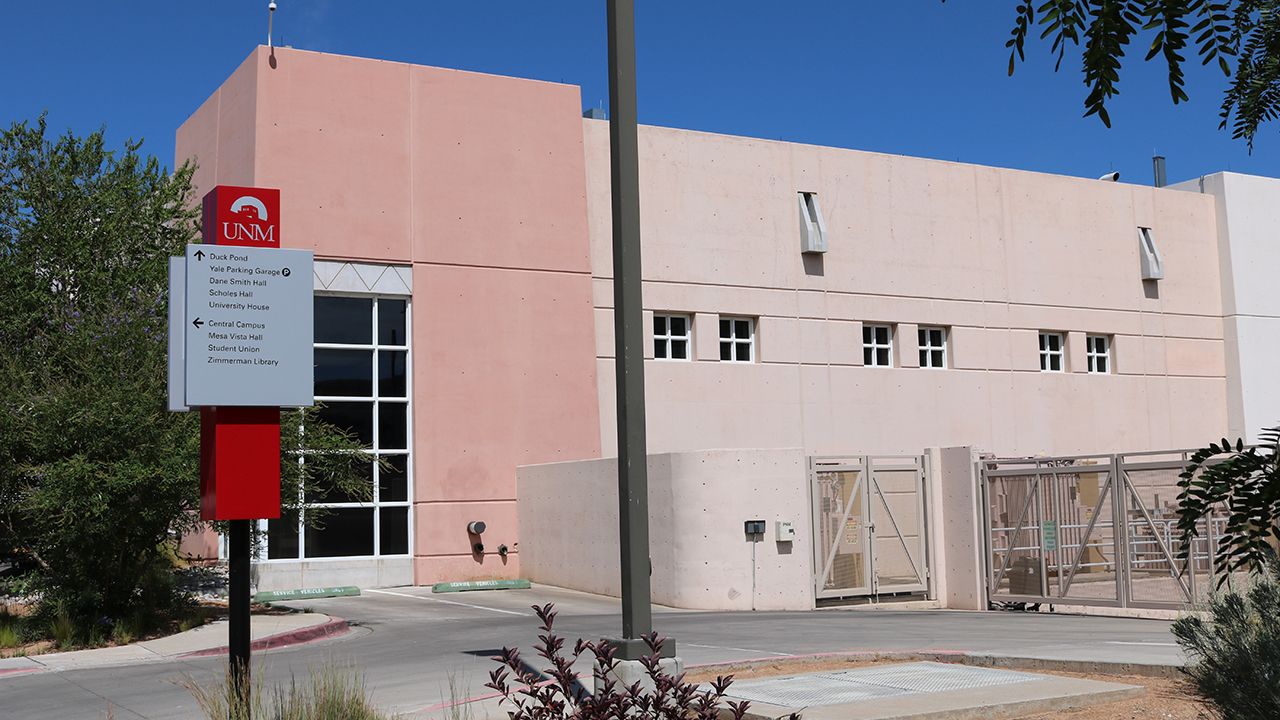 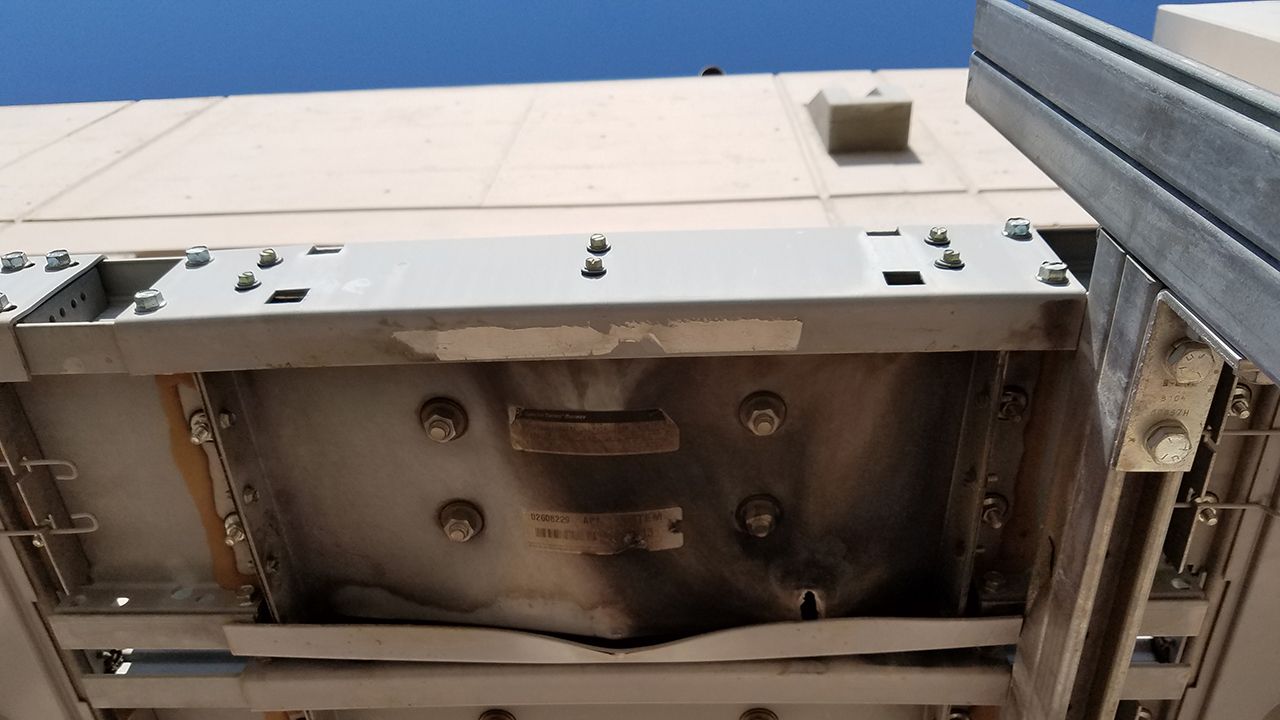 A view from underneath the damaged bus duct discovered by PPD Utilities technicians at the Lomas Chilled Water Plant during a routine inspection.
Credit: PPD Utilities 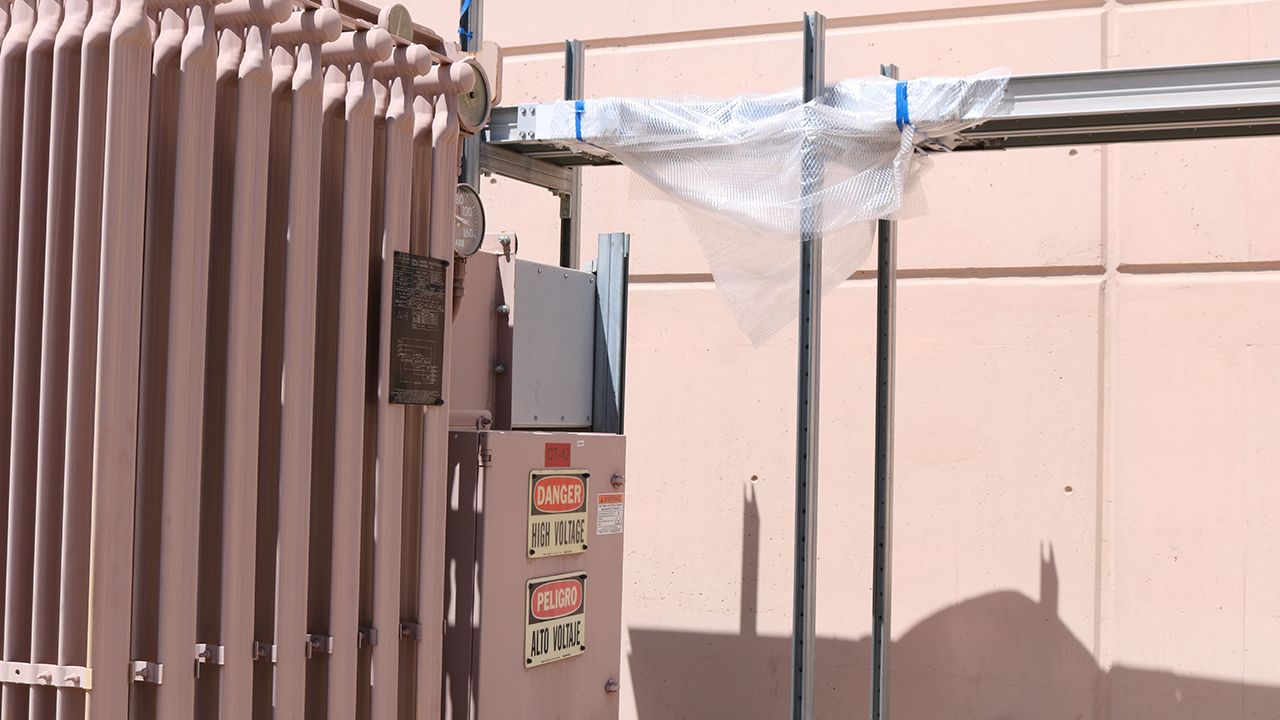 Technicians covered the damaged bus duct to protect from moisture until the repair can be completed.
Credit: Rachel Stone

Scheduled outage at the Lomas Chilled Water Plant a success

When the campus infrastructure is operating as it should, most people don’t even think about the hundreds of Physical Plant Department (PPD) staff who work every day of the year to make it all possible. It’s when things go wrong that the management of the campus facilities is brought to the forefront of everyone’s mind.

Last week it was discovered that a 480 volt bus was damaged at the Lomas Chilled Water Plant. The technicians at PPD Utilities knew that in order to keep the plant operational, a transformer “swap” was needed to avoid an unexpected outage to the facility, and to allow repairs to the bus duct between the online 480 volt transformer and the breaker.

The Lomas Chilled Water Plant provides chilled water to cool most of the UNM Main and North Campus buildings using each buildings’ heating, ventilation and air conditioning (HVAC) equipment. If this facility were to go offline, many buildings would not be cooled to optimal temperatures, which could affect research, equipment and patients.

“This kind of ‘swap’ is a regular thing that we do as a utilities provider,” said Larry Schuster, associate director for PPD Utilities. “The reason this situation was different is because there was damage to one of the bus ducts, and we did not know how this occurred or if there was other unknown damage to the system.”

The campus community was informed of the planned outage to the Lomas Chilled Water Plant. Schuster said that PPD Utilities’ primary goal is to provide reliable utilities services to the campus community and believes they consistently reach that goal. The transformer swap went as planned during the early morning hours on Monday.

Schuster explained the importance of an N+1 model for UNM’s utilities, which basically is having an operational backup in place should any single critical system component fail.

“We have operated and planned with the N+1 redundancy in mind. For example, a utilities group may have two breakers, two transformers, or two boilers instead of one. Or, they may have three chillers instead of two, and six pumps instead of five," he said. "This kind of planning is to ensure when problems arise, we can keep the campus serviced without interruptions. This kind of reliability at the University of New Mexico comes at additional cost. The value of that cost is realized when situations such as this arise.”