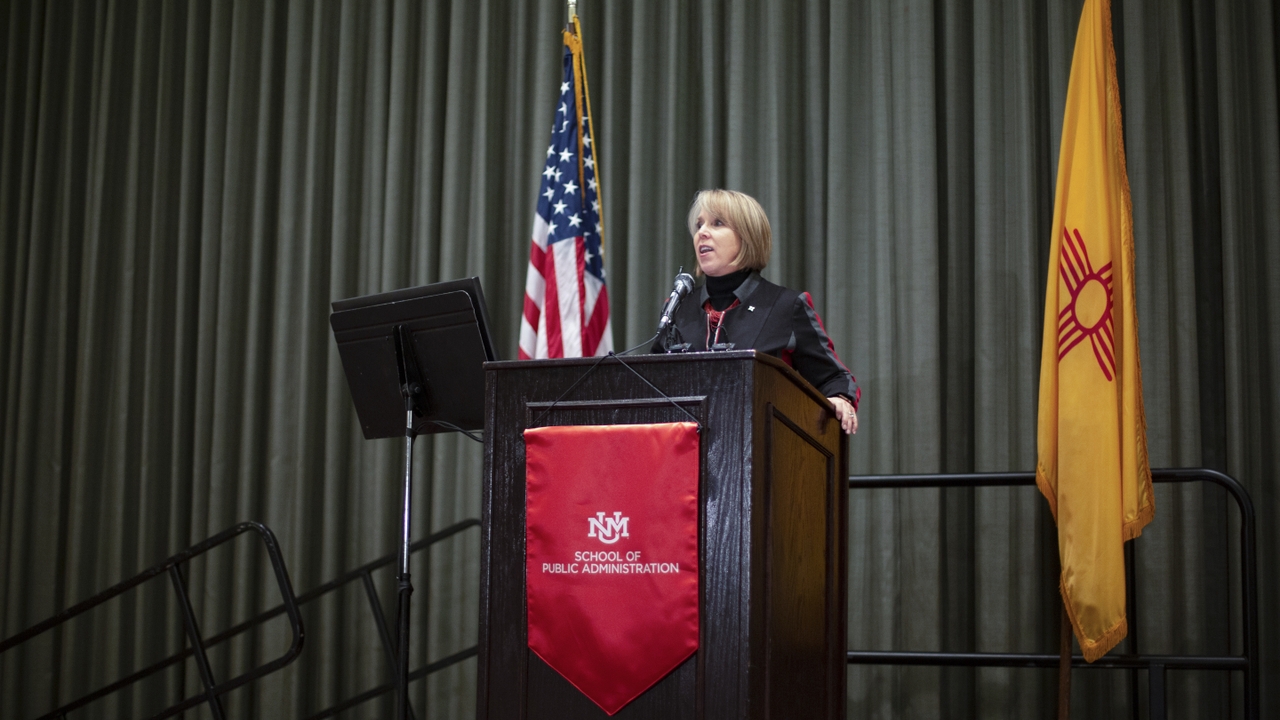 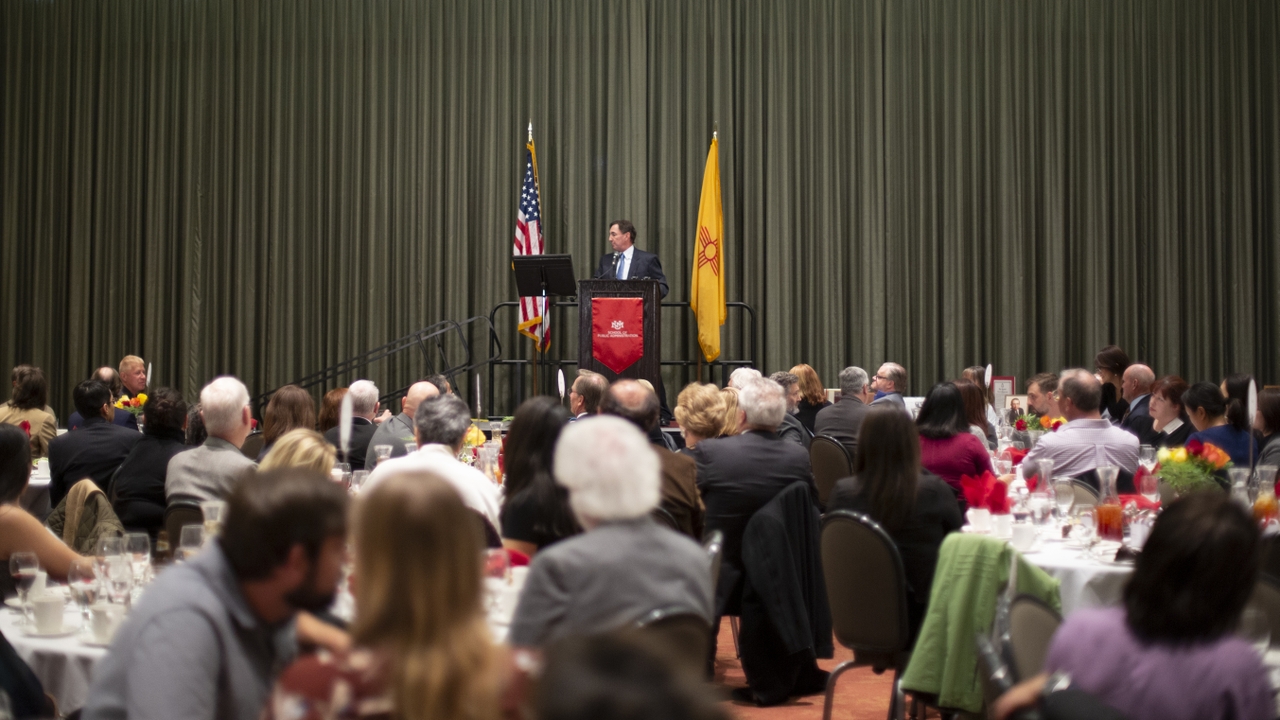 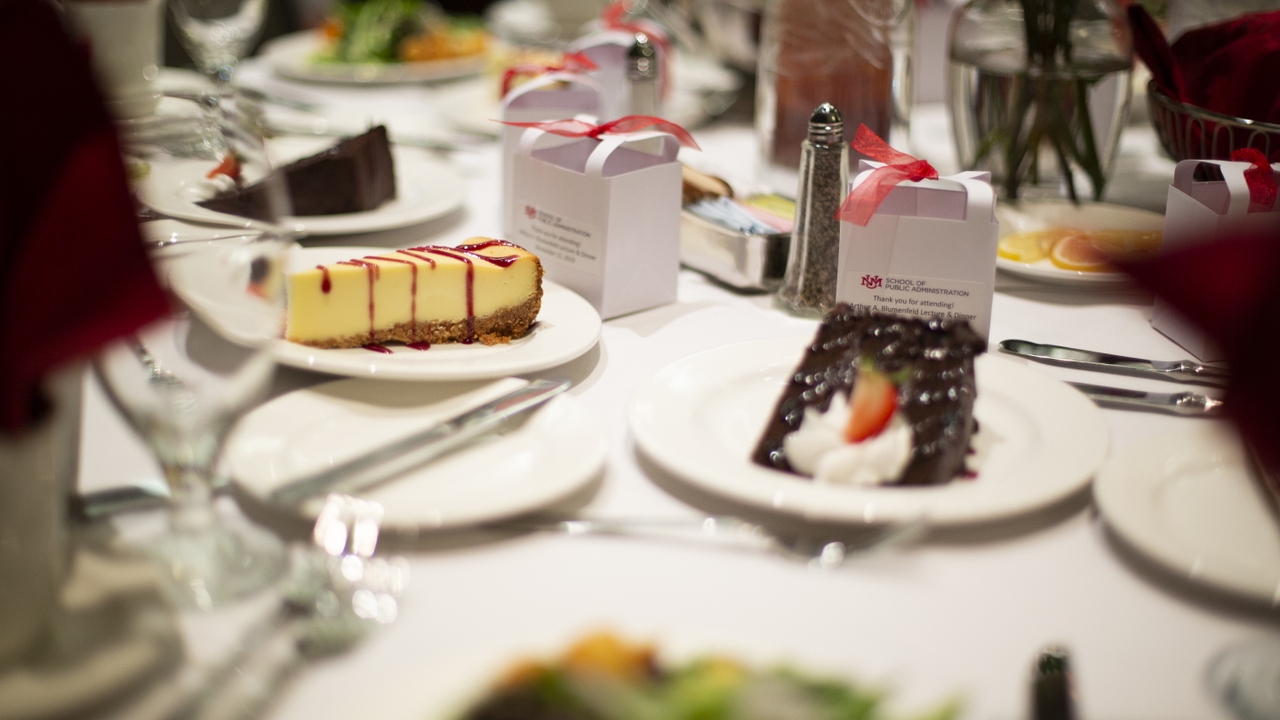 Governor Michelle Lujan Grisham delivered the keynote address to the 17th annual Arthur A. Blumenfeld Endowed Lectureship, speaking to a room full of university, city and state leaders. Her address was the last on a list of festivities recognizing the 50-year anniversary of the UNM School of Public Administration (SPA).

“I’d like to add my voice to the list of people who have congratulated the UNM School of Public Administration on your 50th anniversary,” the governor said. “It’s an incredible milestone, and it’s a testament to the educators and students who have built this program, who have worked their way through this program and who have gone on to be leaders in administration, finance, education and any number of service-oriented fields. I congratulate you and I encourage you to keep up the hard work.”

Lujan Grisham challenged those in the room to find innovative ways of thinking about and tackling the problems we face. She encouraged listeners to communicate and collaborate across organizations in order to increase efficacy of state and local agencies. Above all else, she said empathy should be at the heart of all that is done in public administration.

“The renewed sense of optimism in our state starts with you, starts with people committed to serving their communities and their neighbors, people who are 110 percent dedicated to finding a way to meet and exceed expectation,” she concluded.

“We had the governor give the Blumenfeld keynote this year and UNM President Garnett Stokes give it last year – both were outstanding opportunities for the School of Public Administration,” said Bruce Perlman, SPA director. “Having these two women bookend our anniversary year really showcases how far the program has come during the last 50 years, and how strong it is now.”

UNM President Garnett S. Stokes kicked off the 50-year celebration at the Blumenfeld Lecture last year. She introduced the governor as this year’s keynote speaker, heralding her history rooted at UNM and cultivated statewide.

“A twelfth generation New Mexican, and two-time University of New Mexico alumna for both undergrad and law school, she kept professors and school administrators on their toes,” Stokes said. “Her time on this campus was certainly indicative of her commitment to service.”

On the guest list were former and current state leaders including the District Attorney Raul Torrez, Directory of the Legislative Finance Committee David Abbey, State Treasurer Tim Eichenberg, several Albuquerque city officials and many of the SPA faculty. In addition, countless University of New Mexico deans, faculty, staff members and students were in attendance.

The Arthur A. Blumenfeld Endowed Lecture Series honors the life and work of Art Blumenfeld, former national president of the Government Finance Officers Association and former Chief Administrative Officer for the City of Albuquerque. He was dedicated to furthering best practices in public finance and one of the missions of the Blumenfeld Lecture Series is to facilitate excellence in public administration and finance.